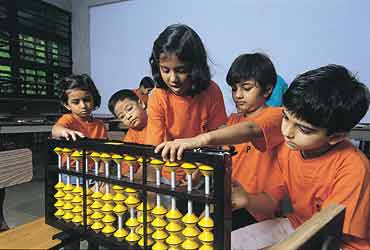 outlookindia.com
-0001-11-30T00:00:00+0553
Vrushank Ramachandran, age 5, stands before a wooden frame filled with bright yellow beads, eyes and mind focused on the centre of the abacus. Behind him an instructor calls out "10+7+4". Vrushank’s little hands move a few beads and he bursts out: "21." "Right!" exclaims his triumphant teacher, and the other kids give their youngest mate an encouraging thumbs-up at the Wizkids centre, Delhi, affiliated to the Malaysia-based International Mental Arithmetic Academy.

Many of India’s learning hotspots are offering young minds new modes of doing maths, showing them how to count like the ancient Chinese, Egyptians and Vedic Indians, and introducing them to funky maths labs and rejigged traditional Indian games. It’s all meant to help children get over their paralysing fear of numbers, of formulas and, in general, of maths, the most abstract subject in the classroom. Here even toddlers get to recognise the fiveness of five, which allows unrelated groups of, say, birds, bells or buses to be clubbed as ‘5’, all for tick marks and smiley faces on worksheets.

And since maths is the sum of all fears, schools that can afford to are abandoning the ‘chalk the talk’ blackboard method, from the foundation level. Their attempt is to help the kids discover mathematical concepts through ‘touch, feel and fun’, as opposed to read, write and rote. At policy level, too, NCERT and CBSE directives requiring schools to provide maths labs for classes 3-8 came into effect last year. "I’m busier now than ever," says Jose Paul, educational consultant, former director, Education Planning Group, and a lifelong advocate of maths labs. He has even developed a low-cost lab for toy firm Creatives. To aid concept-building, these are packed with materials like Mikado sticks to help fix place values, wooden blocks for geometry and manoeuvrable fraction wheels. Says Paul: "Give kids smart fun and games and what you get is learning." 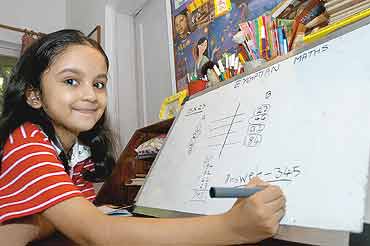 Right now, at school, Katayayni Sinha, age 8, class IV, Sardar Patel Vidyalaya, Delhi, doesn’t have any fear factor. She says it’s fun when teachers "give us tricky questions". After doing a summer class about Egyptian maths, which uses a simple doubling system in lieu of tables, her new fascination is King Tut and the pharaohs. "She’s quite an Egyptologist now," says her mother Gayatri, adding, "special inputs have brought alive this faculty in my daughter, it wasn’t like that in my time." And Katayayni who’s explaining her two-column Egyptian computation—"because they didn’t have zeroes and tables in olden days"—pauses midway and asks us adults: "You understood?"

The overall shift is from computation to understanding. Aashalata Badami, who trains teachers across India in activity-based elementary maths, and author of Oxford University Press’ Discovering Maths series, published last year, has a bell curve theory. Says she: "The blackboard method catered to a small percentage of the class. Or, the extreme right of the bell curve, made up of gifted kids. Now, the focus is on the average child, and new maths methods are helping more kids move to the right of the bell curve." Change-makers like Prof Dinesh Singh, director, Mathematical Sciences Foundation, Delhi, who runs a maths helpline, hails this. He says: "For most kids, maths is like eating karela, they hate it, but they are forced to swallow it." More so, since parents frighten kids by asking: ‘If you don’t do well in maths, what will you do in life?’

Today, smart tots at pre-primary level in south and west India are spending their Saturdays at Brain Gyms, where bright colours and soft ‘alpha’ instrumental music to calm their minds are part of the learning design. These abacus-based sessions are solely created for youngsters from ages 4 1/2-6 "to remove the number phobia, develop right and left brain skills and enhance memory". The Malaysia-based SIP (Sociable Intellectual Progressive) Academy introduced this programme in India in 2004 in partnership with schools, and presently has over 1,000 young ones enrolled in their Brain Gyms. 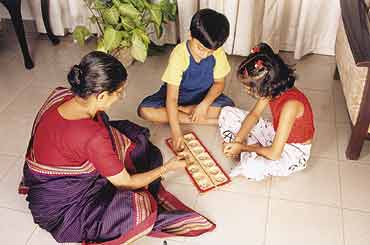 Says Godhuli Gupta, who takes Brain Gym and AMAL (Accelerated Mental Learning) at the Bombay Scottish School, Powai, Mumbai: "Writing uses one side of the brain, while the use of both hands on the abacus leads to whole brain development." Some kids have taken to this new maths like, well, kids with a bucket and pail in a sandpit. Five-year-old Mumbaikar Neha Mehta, when asked if she minds studying on Saturdays, is puzzled. "Study?" she asks. "No, mostly we play." And we leave it there; why remind her that those one-and-half-hour sessions are stuffed with two-digit sums?

Traditional Indian mind play, too, has reappeared in a new delightful and eco-friendly avatar. Says Vinita Sidhartha of Kreeda (‘play’ in Sanskrit), "Our parents plucked their games from the earth, using mango and tamarind seeds, pebbles and cowrie shells." Three years ago, this Chennai-based entrepreneur began reviving ancient games like Pallanguzhi, which she calls a maths tool. With its varying difficulty levels, it teaches everything from simple motor skills and counting, to banking and saving. Meant for 4-10-year-olds, it also offers family fun and allows grandparents to relive their childhood play. In the last two years, Vinita says she’s conducted over 40 training sessions to introduce teachers to Kreeda’s maths values. These attractively designed games, made of eco-friendly particle board packed in natural fabric and filled with seeds and shells, are selling well at schools and stores like Landmark in Chennai and Dhoop in Mumbai.

Another method taking root in schools is Vedic mathematics, derived from the Vedas, whose 16 sutras can supposedly solve most arithmetic, algebra, geometry and trigonometry problems. O.P. Sawhney, of the Institute of Vedic Mathematics in Delhi, describes it as "maths without the tears". Says Sawhney: "Our children aren’t taught to love numbers like characters who can give you beautiful answers."

He means numbers like 37, when multiplied by 3 gives you 111, multiplied by 6 it gives you 222 and by 9 yields 333. This June, when Sawhney introduced 37 to a class of pre-teens, all the Pokemon and Playstation addicts responded with glee as 37 morphed into these triple-whammies. They also followed Sawhney’s pictograms to solve multiplication sums in one-line answers (see illustration). Says class V student Kunal Sharma: "I’ll use it to check my answers in school."

Udayachal School, aka the Godrej school, considered one of Mumbai’s model learning institutes, introduced Vedic maths to class V students with a skit last year. It has become part of the curriculum along with conventional maths. Says Principal Binaifer Chhoga: "After initial difficulties with a new method, once our kids learnt the sutras, or shortcuts to complicated calculations, they solved sums at lightning speed."

Vedic sutras even helped a dyslexic student solve sums much faster than conventional operations, say Udayachal’s teachers. This year they are extending Vedic maths to class VI and offering the AMAL class to young ones. "We want kids to conquer their fear of maths," says Chhoga.

"Children who have dyscalculia or learning difficulties with numbers, need the help of sight-and-touch methods," asserts Badami.The AMAL instructors say their methods help kids with dysgraphia, dyslexia and dyscalculia, with exercises like Lazy 8, where a child puts out his hand and moves his thumb in an ever-increasing figure of eight; as it crosses the midline of the brain, mirror image problems get reduced.

But there are dropouts at abacus classes. Says one parent: "If weekends are for abacus class and homework, it’s too much extra burden on my kid." Bringing in a wider reality check, Ravi Gulati, who runs learning centre Manzil in Delhi for government school kids, states: "Learning doesn’t have a connection with knowing, that’s why kids hate maths."

Last year, when Ahmedabad-based Educational Initiatives ran a nationwide test to assess learning, "almost 70 per cent of the 10-year-olds ticked the 6.4 metres option, when choosing the height of the tallest man on earth," says test-developer Suchismita Srinivas. "That’s taller than a giraffe!" The other options were 1.5 m, 2.4 m, and 3.6 m. This is why many schools aren’t offering scribbled blackboard formulas but maths as a full-dimensional experience, where children measure spaces with tapes. Says Srinivas: "You need life skills, it’s not enough to know where to put the decimal place, you must know that Rs 1.90 is a lot less than Rs 19.0."

A middle ground is appearing. One that is helping maths meander out of the classroom. Like the tour of Humayun’s Tomb in Delhi, conducted by Badami in April, where she introduced 8-10-year-olds to Mughal maths. And helped them spot the symmetry of the Star of David, the geometry of the char bagh garden and showed them how "tessellation" helped fit tiles together in patterns.

This summer, Sonia Shamihoke, a primary maths teacher at Delhi’s Sanskriti school, conceptualised Newton’s Playground, a novel maths and science session at the British Council "to bring charm to this dreaded subject". It was over-subscribed within an hour of announcement. And kiddies happily trooped in for funky mathemagic, made up of number-juggling activities and Kreeda games, giving each other high fives and stamping their feet each time they cracked game theories. Right now this number-munching solution club might be small, but it’s all set to grow in exciting ways. Join in, but remember, the age limit seems to be six.

From The Sun To The Masses