Prisoners in some Karnataka jails find there is life after crime: in the therapeutic arms of theatre 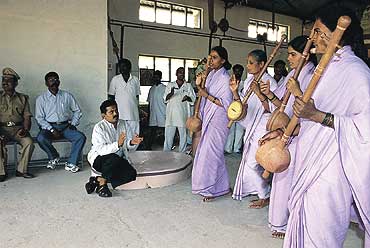 Shakespeare knew it. Rajesh Khanna mouthed it. Bosses of high-security prisons in Mysore, Bangalore and Bellary have now realised it: all the world’s a stage. And this stage, presently, is redeeming the lives of hundreds of inmates in these jails of Karnataka, not only improving the quality of their days without freedom, but also preparing them to lead a useful, productive life once they return to the wide, wicked circus outside.

It’s a unique programme consisting of a 45-day workshop, conducted by the prisons department and Sankalpa, an ngo set up for the prisoners’ "reformation through theatre". In addition to nurturing their dramatic talents, the workshop puts prisoners through yoga, meditation, painting, sculpting and sundry other therapeutic mediums. It also helps them draw up a course of employment ahead of their release from prison.

Hulugappa Kattimani, 42, student of the late theatre personality B.V. Karanth, anchors the workshops. Prisoners learn the ropes of drama from him and go on to climb them in a variety of ways, giving us Kannada versions of Julius Caesar, Macbeth, Hamlet and the late Bhisham Sahni’s Madhavi along the way. The last was telecast by Bangalore Doordarshan recently, making celebrities out of hardened criminals. Last year, inspired performances by a group of lifers won rave reviews at the National Theatre Festival on Shakespeare’s plays in Kasargode, Kerala.

Interaction with prisoners has provided Kattimani with new insights into human nature and its responses to an aesthetic calling. "When we involve ourselves in the experience of famous works of sensitive playwrights, we are reborn. This rebirth is experienced not only by the actors on stage but by the audience as well." All geared up to broaden the horizons of his born-again charges, Kattimani is ready with a plan: "I want to take them to...