More than fears over oil well fires, this time US V-P Cheney's links to firms tendered to put them out could raise a blaze 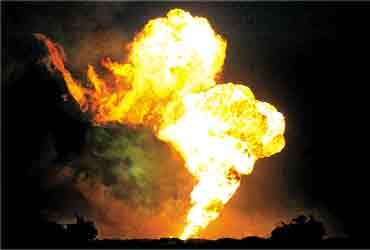 outlookindia.com
-0001-11-30T00:00:00+0553
One of the most enduring images of the 1990-91 Gulf War was of burning oil wells in Kuwait—plumes of smoke blackening the sky by day and pillars of flame lighting the desert by night. Twelve years later, as coalition forces drive into Iraq itself, the images are remarkably different in comparison. With most of the country's southern oilfields falling to the US army in the initial days of the war, only a clutch of well-heads have been fired by the retreating Iraqis. Of the seven burning wells—out of Iraq's 1,685—one fire has already been extinguished by a team of experts from neighbouring Kuwait. In the north of Iraq, where its other major deposits lie, no fires were reported in the first week of the war. Indeed, oil was still flowing along the pipeline from the city of Kirkuk to the Turkish port of Yumurtalik even after the coalition forces launched their invasion. But with US paratroopers in the region, and clashes intensifying, the situation could change rapidly. Though oil was still being pumped out of Iraq, banks were reportedly refusing to give letters of credit.

The well-heads currently burning represent a fraction of Iraq's active capacity and news of the fires had no impact on international oil prices; it actually fell after the war began due to excess global production.

Most experts agree that containing the existing fires will take between 30-45 days. While fighting the blazes will be more difficult than what was encountered in Kuwait—due to a lack of water and greater pressure and natural gas content—it's a relatively simple operation, in contrast to what pictures of blazing flames tend to convey. The real task, in fact, is to rehabilitate Iraq's oil production infrastructure, creaking after a decade of debilitating sanctions.

Before the fighting began, Iraq was producing 2.5 million barrels of oil daily, 80 per cent of which was exported under the UN's food-for-oil scheme. This output was a million barrels down from what was pumped prior to the last conflict. The shortfall was as much a reflection of Iraq's degraded infrastructure as the limits placed by the UN.

Even as fighting continues in Iraq, the US government awarded a tender to Kellogg Brown and Root (KBR), a subsidiary of oilfield services company Halliburton, to put out the well-head fires in Iraq. (Halliburton oversaw the extinguishing of more than 300 of the 700 well-head fires in Kuwait after the last war, most of which were doused inside a year.) The task has been subcontracted to the Texas firm Boots & Coots, which had experts in Iraq assessing the magnitude of the problem even before the contract (the value of which has not been made public) was announced.

The choice of KBR may raise a few eyebrows, despite its previous experience in Iraq. Until his successful run for vice-president on the Bush ticket, Halliburton was headed by Dick Cheney. No one in the industry is openly saying the company directly benefited from its association with its former ceo, who also has a question mark against his name over the collapse of another US energy giant, Enron. Nor are there many comments at the speed at which the tender for the job of extinguishing the well-head fires and the rehabilitation of the oilfields was given out. Not yet at least.

The contract comes at an opportune time for Halliburton—which is still negotiating terms of payment in a $4.0 billion lawsuit —and which has seen two of its subsidiaries file for bankruptcy protection. News of the successful bid on the tender drove the firm's shares up four per cent.

US President George Bush has repeatedly said the energy resources of Iraq belong to the Iraqi people and that the war is not about the US making a grab for the world's second largest proven reserves.However, with US firms already on the ground, and long-term contracts in play, it's a moot point when the Iraqis will be able to enjoy a full say in the managing of their resources.

An Empire Of Corpses?