Did the NSA’s ‘civilian’ NSG botch up the Pathankot operation? Would the army have handled it better? 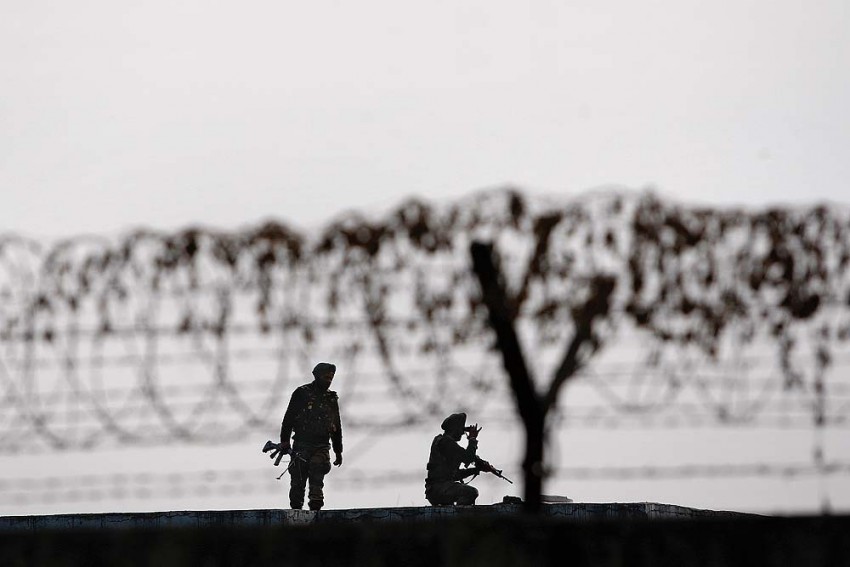 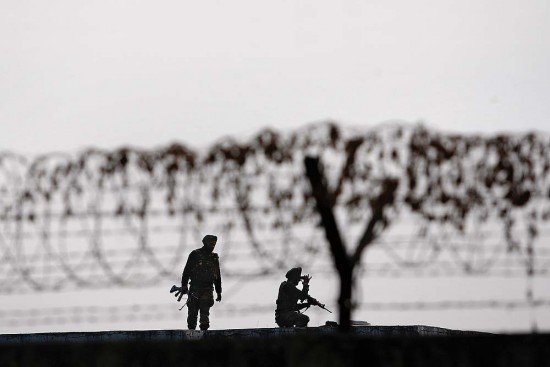 Much before the 168 men of the National Sec­urity Guard (NSG), ordered in by Natio­nal Secur­ity Advisor Ajit Doval, landed at Pathankot air force base in the eve­n­­ing of January 1, the terrorists who struck in the wee hours of the next day were already inside and biding their time. They had scaled the 11 feet high perimeter wall, possibly in separate groups of two and four. While the group of four was in a forested area of the base, the other two who entered—most lik­ely on the intervening night of January 31-1—hid in a truck in the parking area of the base, where scores of vehicles are stationed. They obviously knew beforehand that the vehicles parked in this particular area of the base are not used on a regular basis and they could remain there undetected. Who told them?

It is these two who emerged later—some time after the Union home minister  had mistakenly declared the operation “finis­hed” on January 2—and re-engaged the tro­­ops from a two-storey building on the base. Some brazen reports even suggest that they ate undetected at the airmen’s mess and rested for a while in empty airmen’s barr­acks. The terrorists used the concrete cupboards and steel doors of the building to shield themselves from the conventional fire power coming their way, and it necessitated an attack by a BMP to bring down the building itself to eliminate them. Six terrorists in all were killed in an operation that lasted for almost three days.Seven security personnel died, including Lt Col Niranjan Kumar of the NSG’s bomb squad. Though the operation at the air force base is over, it’s still not clear if more terrorists are at large, for the initial intelligence input poin­ted to an infiltration by 15 terrorists. Even as this story goes to print, security forces are searching another vill­age in Gurdaspur where suspicious men in army fatigues were sighted in the fields.

The whole affair is being seen as a botch-up: the security establishment had specific intel about an impen­ding attack, but failed to act. It has raised que­s­tions about the manner in which the NSA assumed the role of a military commander, ordering troops, deciding how much strength is needed for the operation, and ignoring the army, which has experience in dealing with such situations, not very different from counter-insurgency ops. The overall control of the operation remained with the civilian set-up, and in what is becoming a pattern, the military was reduced to a frustrated bystander, providing peripheral assistance at best.

With the NSG out of its depth, the army was called in to deliver the final punch.

What would have been a quick surgical operation conducted by a brigade-level strength of troops degenerated into a three-day affair, with no clarity over who was in command. It was only later, when the NSG—trained for aggressive urban interve­ntions such as hostage situations and anti- hijacking operations and not for CI ops—was found out of its depth that the army was called in to deliver the final punch. “In such critical operations, it is essential to designate one commander on the ground and place all resources under his command. The NSA would have done well to inform the army HQ and leave it to them to decide on the quantum of response that would be appropriate and which formation/units should be entrusted with the task. It should also have been left to the army HQ to decide what additional/special resources (inc­lu­ding the NSG) were requi­red for the task,” says Lt Gen Tej Sapru (retd), former GOC-in-C, Western Army Command.

The “unnecessary interference by the NSA”, who was seen by the military brass to be overstepping his domain, has also set off dark allegations of  a police-versus-army riva­lry wherein the NSA (a former police offi­cer) is perceived to be deliberately acting to diminish the military’s reputation. As Lt Gen Sapru points out, “Coordination and control of the operations from Delhi, by the NSA himself, is both ridiculous and comical. Here is a case wherein we had hard intelligence about a likely terror attack and there was a divisional size force available in the immediate vicinity. But for some unfathomable reason, the NSA decided to move a team of the NSG from Delhi, rather than ask the army HQ to activate the concerned formation in whose area of responsibility the air force station falls. Why an additional D-G level officer had to accompany a company strength of NSG leaves one puzzled. The NSA is an advisor and it is best that he fulfils that role, rather than assume the role of dir­ecting operations which can only create confusion of command and control, as was too evident in this case.”

“Information generated in Pathankot was not shared with us by the Punjab Police. Even information garnered from what SP Salwinder Singh told them—that terrorists had indeed infiltrated the area and the air force base was a target—was only passed on to the NSA and the Intelligence Bureau...whereas parallel sharing of information is absolutely essential in such matters,” say senior army officers involved in the operation. The area falls in the jurisdiction of the 29 Infantry Division at Pathankot’s Mamun Cantonment and the formation would have set their counter-insurgency drills in place as part of the normal charter of duties and earmarked troops for such an eventuality. But the Delhi-centric operation mounted and overseen by the NSA, derisively referred to as the “super cop”, ens­u­red this was not to be.

“An operation of this kind would have been handled by a  brigade commander and, given a free hand, it would have finished much earlier, with possibly fewer lives lost,” say senior army officers. In addition to an infantry division and two armoured brigades, the army also has around 30 Special Forces commandos in Mamun cantonment. Left to itself, the army would have sealed the air base in time and established cordons in vulnerable areas. A special forces off­icer who has served in three terrorist-infested locations in Jammu and Kashmir remarked despondently, “I was deployed for the Pathankot operation, but never saw action.” 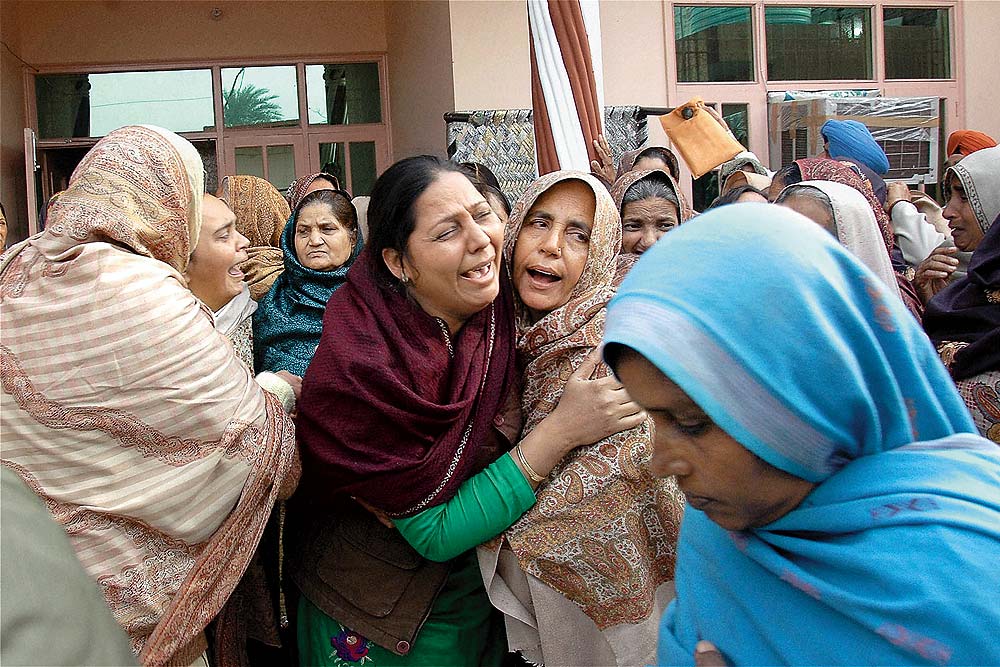 The seeds of the chaos at Pathankot were in many ways sowed at Dinanagar in Gurdaspur, where a police station was attacked by three terrorists on July 27. Four policemen, including a superintendent of police, were killed in the attack. There too, army personneol from Tibri garrison, a mere 20 km away, immediately reached the spot but were kept twiddling their thumbs, waiting for hours before then director-general of Punjab Police Sumedh Singh Saini came from Chandigarh and directed operations himself.

“A brigade commander would have handled this op better...and it would have ended earlier.”

“The genesis of failure and delay is due to the deep-rooted mentality of the police to hog credit even if it is at the cost of national security,” says an angry army officer who was involved in both operations. “The police has to learn the art of delegation and allow specialists to do the job. How can you rely on one man who takes his own sweet time to come?” The argument given by Saini was that the Punjab police, which fought terrorism in the 1980s, is equipped to deal with insurgents and does not need outside help to defend its own stations. In some ways it was a laudable decision to handle its own crisis in times when the army is pressed in to aid the civil administration even for tasks such as rescuing children trapped in borewells. And Doval stood by this decision of the Punjab police to keep the army at bay in Dinanagar, notwithstanding the police’s penchant to rely on its star officer, Saini. But his choice of the civilian-controlled NSG (it reports to the ministry of home affairs) to repulse an attack on a defence air base is inexplicable. “It is time that we understand that personal glorification has no place in a situation where national interests are at stake,” says an exasperated official who monitored the operations.

Both in Dinanagar and in Pathankot, security forces were under pressure to capture a terrorist alive if possible. A most desirable idea, say field commanders, but very difficult to pull off without appropriate technology, which is not forthcoming.

The Punjab police, already under fire for its delayed response to the ‘kidnapping’ of its Gurdaspur SP Salwinder Singh, has justified its response by claiming it was because of its prompt action that the NSG reached the air force base before the terrorists fired the first shot. But what of the role of Salwinder Singh himself, whose bizarre statement that he was let off by the terrorists because of his religion adds to the mystery? Evidence of the involvement of Punjab police personnel in the state’s drug business comes up off and on and lower level officials have also been booked. The NIA is now closely investigating the possibility that SP Salwinder Singh might actually have helped the terrorists reach the air base (remember his car was found just 500 metres away from the base) or even lent them his vehicle with a blue beacon to get past the various nakas along the way.

Military intelligence and the NIA is exploring the possibility of Salwinder Singh being compromised and blackmailed by the narco smugglers, which could have forced him to help out the terror group that infiltrated through a gap in the border fence along the international border (IB) on New Year’s eve. “Instead of the usual drug consignment, this time he was likely given this group to shepherd instead. It’s the only likely explanation of why he was let off alive, when someone like Ikhagar Singh, the taxi driver who was summoned a few hours earlier, was killed,” says an officer. But already there are indications that realpolitik is coming in the way of pinpointing the culpability in the infiltration. Will the prime minister and his NSA finally crack the whip on Punjab’s dubious dalliance with the drug business, which, according to its own former DGP Shashikant Sharma, has degenerated into narco- terrorism?

This is the fifth attack in this area since September 2013, the most recent one being Dinanagar in July 2015, where also the modus operandi of infiltrating the border was the same. Taking advantage of unfenced portions of the border—particularly between BP 1 and 9—terrorists, usually dressed in combat fatigues, have been hijacking passing vehicles and attacking police or military targets with impunity. The BSF does not have a second tier of defence and no effort seems to have been made to plug the gaps through more intense patrolling or thermal imaging devices. The BSF, which cannot esc­ape the charge of failure to prevent/det­ect the infiltration, is in denial mode despite clear evidence about its ineptness.