If it isn't tickling your ankles, it's not worth talking about. The long skirt makes a much awaited comeback.

outlookindia.com
-0001-11-30T00:00:00+0553
Too frisky to wear a sari? Bored with the nothing-new, monochrome jeans? Well, don’t miss this season’s call-up. It’s time to stop skirting the issue. Itsy-bitsy gear may carry the night at fash-frat dos, but the sunny day’s mandate is for the long-in-the-leg wrap. This fall’s vote—with ardent middle-class participation—is for the flaming long skirt. Be it the college campus, office, pub or mall, urban Indian street fashion has been flooded with the flared, the crinkled and the colourful. The news is spreading faster than you can say Zinta.

And yes, the obvious connection is Lakshya, Preity Zinta’s latest Bollywood offering and her latest makeover. The college activist-turned-journalist complementing her zeal with gypsy skirts and kurtis. She isn’t alone either. The quintessential Indian ghagra skirt shows flashes of brilliance as Esha Deol and Kareena Kapoor flaunt it in Mani Ratnam’s Yuva.

So is this just another case of real life imitating (kitsch) art? The answer’s an emphatic no. Long skirts had stepped out of the closet a couple of seasons ago, rid of their ngo/artist hang-ups and swirling their way into the girl-next-door’s heart. If earlier it had snob value, selling from niche outlets like Anokhi or Fab India, now the skirt has shed its stand-offishness. It goes in flea markets for as little as Rs 150. Though, if you must spend a hundred times that, there are designers who’d be happy to have your custom. 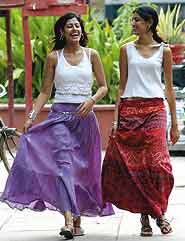 Image consultant Prasad Bidapa has been a believer for awhile. He thinks the modern long skirt is a stylish, chic version of the lehenga/ghagra—the broadly flared, printed or plain full length skirt traditionally worn by women in North India. "It’s become an almost exclusive Indian fashion statement, just like the kurti and the sari," says Bidapa who predicts the trend may soon reach foreign shores, "just like the kurti did". In fact, some designers do trace the origin of the long skirt to the Indian lehenga. Like Goa-based maverick designer Wendell Rodricks who tweaked the classic kurta to make perhaps ‘the first kurti’ in India. There’re also designers like Aparna Chandra, Ritu Kumar and Malini Ramani, diverse in their lines, but who have created some of the first modern, yet Indian, long skirts.

For streetwise Chandra, skirts are evergreen. "I wear them all the time," she says. Her take: long skirts work well for Indian women, who tend to be heavy in the lower halves of their bodies.

While Chandra pitches the long skirt’s structural attributes, Kumar finds in the revered garment an essential part of the anthropological history of India! "The Kutch people have been wearing the traditional long skirt for the last 3,000 years," avers Kumar, whose collection at this year’s Lakme India Fashion Week consisted primarily of long skirts.

Her sentiments find an echo in designer Raghavendra Rathore who also presented —and successfully—organza and silk long skirts with a petticoat, or straight silhouette at LIFW. As Rathore puts it, "Right now, retail space for long skirts is certainly more than that for short skirts." He finds that the inspiration behind sari and skirt is the same and so is the silhouette. 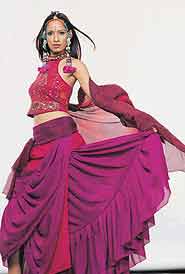 What weighs heavily in favour of the long skirt is it offers just the right mix of tradition and modernity. A fact that’s helped it find its way into even boardrooms. A-line skirts, especially, make for impressive officewear when teamed with formal cotton tops/shirts in summers and a blazer in winters. Divya Dogra, a software engineer at Sapient Technologies, Gurgaon, can vouch for skirts as effective officewear. "It’s a very good alternative to trousers, which though comfortable aren’t really flattering in case you are a bit out of shape," says Dogra who has a collection of 12 skirts in her closet.

Apparently, the long skirt’s usp as perceived by most women is that it manages to hide those love handles and heavy thighs—which jeans and trousers never seem to flatter completely. Then there are those who like the long skirt’s more practical side. As Anuradha Sanyal, a Class XII student in Delhi, puts it, "Since I travel in buses, in summers it’s much better to wear a breezy, pretty cotton skirt than a pair of tight, sweaty jeans."

Another plus for the skirt is its versatility, which makes accessorising a dream. For instance, kundan jewellery goes well with a black brocade top teamed with a black kalli (multi-panelled) skirt. The ensemble even works for a formal event, like a wedding. And for that special night out, try a spaghetti strap top with a crinkled skirt and chunky jewellery. "For maximum effect, wear the skirt six inches below the belly button," suggests Bidapa with a twinkle in his eye. Clearly a situation where skirting the issue makes for the straight route to style and appeal.