In the emerging software landscape, only the frontliners are coping. Others have to realign or perish. 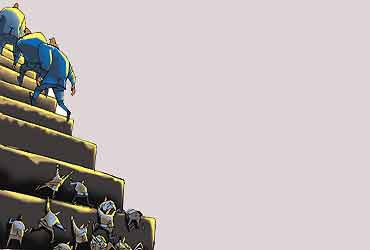 outlookindia.com
-0001-11-30T00:00:00+0553
The past four weeks have unveiled an unfamiliar software story. It's about the great divide, a chasm between the biggies and the rest. The top few firms are doing exceedingly well, even beyond the expectations of the Street (as the Mumbai stockmarket is referred to). But the others are inching up, struggling, or just falling by the wayside. And the Q2 results this year have clearly segregated the two segments. From now on, the frontline tech firms will hog the limelight and the remaining ones will need to either find a profitable niche, merge to gain size, or die.

But it's no smooth ride for India's top three giants—TCS, Wipro and Infosys. As one analyses the results for the past few quarters, it's evident that a few pressure points are building up and are threatening to crack the impregnable business walls of the software trio. So, this is essentially a story of change, transformation, and a realisation that's driving infotech firms to adapt in the old Darwinian manner. Those who triumph will be the fittest, nimblest and the most innovative. 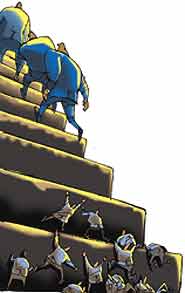 So, from now on, neither retail investors nor institutional ones will believe in overall software sectoral shifts. They will go by what individual companies are doing, how specific managements are driving their businesses and the manner in which foreign clients are looking at them. As Sanjay Anandram, MD, Jumpstartup Fund Advisors, puts it: "The small guys can bridge the gap (between them and the biggies) by changing the rules of engagement. But the real threat to the Indian giants comes from the fact that their MNC competitors are becoming 'local' faster than the former are becoming 'MNCs'."

Before we get into these specifics, let's look at the performance disconnect between the top few and the remaining majority. The three sets of graphics clearly show the consistency in quarterly numbers over the past three years among India's top companies. They also establish the incongruities in the topsy-turvy financials of the others. A sharper picture emerges if one looks at the Q2 2004-05 results. Infosys and TCS have witnessed double-digit Q-on-Q growth in both revenues and net profits. But the same cannot be said for midsize firms like Polaris, Mphasis BFL, Hughes Software and HCL Technologies.

If you are interested in annual figures, chew on these numbers. Of the 3,000-odd software firms in India, which accounted for exports of $10 billion in 2003-04, the top five got nearly a third of the business. This year, the figure is expected to go up to 40 per cent. And the top 20 per cent of the firms gobbled up 70 per cent of the global contracts (in value terms). Here's another way to look at the growing gap—India's top firm clocked in revenues of over Rs 5,500 crore in 2003-04; the tenth largest company recorded a tenth of that and the 20th largest less than 6 per cent of the figure.

In fact, the bigger you are, the better chances you have of grabbing more contracts. For the rules of the game have changed ever since the global bust in 2001 and the subsequent revival just over a year ago. For example, average deal sizes have gone up. From the days when contracts were usually for a few measly million dollars, foreign vendors are now willing to ink deals that can go up to $100 million (spread over a few years). To cite a specific case study, the average quarterly revenues per client for Infosys has gone up from nearly Rs 6.5 crore in Q2, 2003-04, to over Rs 7.5 crore for the same quarter this fiscal. In addition, clients now prefer to dole out all their work to one or two vendors, rather than distribute it piecemeal among several of them as was the case during the boom period in the late 1990s.

To bag new contracts, software firms need the ability to ramp up almost instantly and be in a position to offer a range of services. That's something only the larger firms can do".The (new) global delivery model cannot be replicated easily. Our integrated end-to-end service line capability makes you a one-stop shop for the outsourcing requirements of all our customers," explains Sudip Bannerjee, president (Enterprise Solutions), Wipro. Adds Sameer Kumar, CEO, Acer Ventures, "The ability to scale up in real time is what makes the leaders bag the big projects. Only the big five Indian software firms have the deep pockets to keep 3,000 people on the bench and deploy them overnight if they get a new contract." 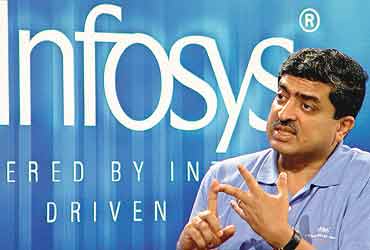 Look at Infosys to get a feel of this trend. In Q2, 2004-05, it witnessed a net addition of over 5,000 employees. Nearly 70 per cent were trainees on whom the company spent money without getting immediate returns. In fact, the utilisation of employees (excluding trainess) in the quarter was 81 per cent, which implies that many of them were on the bench (the jargon for employees who don't contribute to revenues). One must add that this was lower than the figure for the same period last year. As Nandan Nilekani, MD & CEO, Infosys, told journalists at the Q2 conference, "I think the important thing is that we have been able to show scalability on the recruitment front."

Given this reality, the mid and small-size firms can compete on innovation and differentiation and not in terms of scale and scope. "They have to compete on domain knowledge, intellectual property and the like. And there are smaller companies that follow this route. Their role model is not Infosys or TCS, but i-Flex," argues Jumpstartup's Anandram. Others like Partha Iyengar of Gartner Research contend that tier-II firms should ideally focus on areas like retail and continuous manufacturing that are "ripe for niche players who can build domain expertise and command a premium (in rates) from their clients." Tier-II firms that are unable to do this are going through what Gartner terms as "the downward or death spiral." Their growth rates are slowing down, or are almost flat and they are constantly competing for really low-end jobs where margins are under pressure (see graphics).

The challenges are different for the big five. Some experts feel they're still banking on the wage arbitrage, the lower labour costs in India compared to the developed nations. "They are evolving very slowly from being exporters of low-cost, high-quality software services to becoming MNCs," says one of them. Adds Gartner's Iyengar, "Indian companies should not be satisfied with being the low-value work partner. They must find a place at the (negotiating) table as equal partners."

Unfortunately, that doesn't seem to be happening. Let's go back to Infosys to check this point, especially since this is one company that has constantly harped on the fact that it's moving up the value chain quite fast. Look at their figures and you will find that the proportion of consulting business (the highest end of the chain) has come down in Q2, 2004-05, compared to the same period in the previous year. More importantly, the proportion of maintenance and development work (the lowest-end) has remained consistently high at over 50 per cent; although it's down a bit.

Similarly, Infosys' Nilekani claimed at a recent conference that their quarterly result indicates that offshoring (or work that's done in India rather than at the client's end abroad) has taken off in a big way. To bolster the argument, he points out the fact that offshoring accounted for a higher 50.2 per cent of revenues in Q2 this fiscal, compared to 48.3 per cent in same period last year. "If you look at the skew in the growth—15 per cent offshore growth and just 7 per cent onsite—we have been able to drive the growth moving it offshore...," he told journalists. But then if you look at the company's Q1 result this year, the offshoring component was actually lower at 48. 1 per cent. What's even more intriguing is that the Q2 quarterly figures for "consolidated IT services" indicate that Infosys earned more revenues onsite (work done at clients' end) than through offshore. So, is there any consistent offshoring trend that's moving more work to India? (Nilekani was travelling and, therefore, wasn't able to speak to Outlook.) Firms like TCS which have a high onsite component are saddled with other problems. The US has reduced the quota of Indian (and other foreign) engineers who can work in the US. Even this lower quota got filled up on the very first day of this year (October-September). So, in case TCS wants to ramp up its onsite operations this year, it'll find it difficult to do so. Or it will have to hire the most costly employees based in the US. Either way, it'll have an adverse impact on its financials.

At the same time, foreign MNCs are scaling up their Indian operations faster than their local competitors. IBM and HP already have about 7,000 employees each in India or about 7 per cent of their global strength. Accenture has about 6,000, or 10 per cent of its overall strength. Although these are still smaller compared to frontline Indian firms which have between 25,000 and 35,000 employees here, the gap is reducing quickly. Couple that with the fact that Indian firms have still not been able to enter the high-value-added services. For example, Bharti recently signed a 10-year, $700-750 million contract with IBM that entails managing the client's IT applications, infrastructure and disaster recovery services. "No Indian company had the expertise to compete and this was a contract from an Indian client!" sighs Anandram.

Still, let's give the top Indian firms the benefit of doubt. In the next 12 months or so, experts forecast the emergence of 10 global software outsourcing firms that will account for bulk—and the most profitable—of the component of the now-growing business. According to them, 3-5 Indian firms are in contention to join that esteemed list. For that to happen, they will need to beef up not just their IQ levels, but also EQ. Experts say hiring techies may not be enough; they should hire people from the liberal arts background, for instance. "Bidding for projects has to move from the utility frontier to the enhancement frontier," contends Iyengar.

If that happens, the Indian biggies will realise that their best days are yet to come. But if it doesn't, we'll have to write a new software story with companies from China and east Europe and, sadly, not the Infosys, TCS or Wipro.

Win Some, Lose Many