The Sarus crane finds an unlikely haven—in western UP 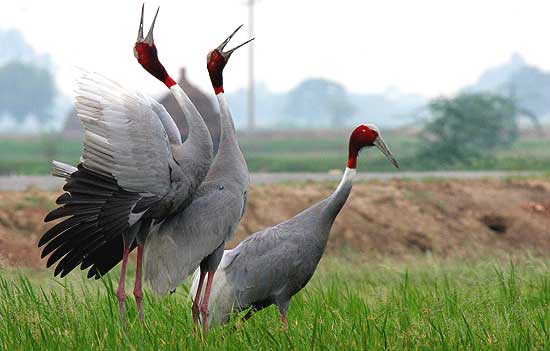 At first glance, this seems like just another pretty pastoral setting. Young girls pedal on a bicycle along a dirt path beside a canal, a buffalo gallops in ungainly slow-motion across the newly planted wheat, and a farmer clambers out of the fields after his morning ablutions. Then, as the mists slowly begin to rise, you hear a strange, whirring call. Standing tall at 6 feet, neck set proudly like a flamenco dancer, wings flung dramatically back, stands the world’s tallest flying bird, the Sarus Crane. His mate, following less than a beat later, joins him in the ‘unison call’ that keeps the spark going between these two fiercely territorial birds. But what’s possibly stranger and more beautiful is that the country’s most populous state, Uttar Pradesh, manages to play host to over 6,000 Sarus cranes— the largest population of this vulnerable water bird in any one region of the world.

“This 50-hectare territory is actually small for such a large bird, which means that the quality of the habitat is super,” observes Gopi Sundar, a researcher with the International Crane Foundation, referring to the specific fields in western UP where the cranes thrive. Not just cranes. This area is home to an incredible 351 species of birds, which, given skyrocketing levels of corruption and greed and self-serving notions of ‘development’ that this region is notorious for, seems nothing short of divine providence. 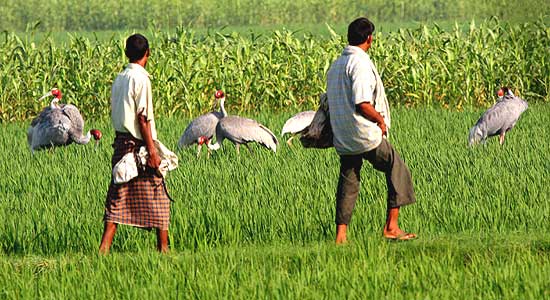 “The conditions which help them thrive have come about simply by accident,” explains Sundar. The region is a patchwork of wetlands, community-managed forest areas, and panchayat-held common areas, resulting in a terrain that manages to be hospitable to the birds despite agricultural activity. Where there is cultivation, the birds still manage to thrive because farmers haven’t opted for intensive commercial crops hostile to them, such as soyabean or sugarcane. Stretches of land are given over to rice fields that remain flooded during the monsoon, and aren’t high on pesticide use or mechanisation.

What is crucial to the equation, though, is the respectful, even reverential attitude of the farmers to the crane. Since they’re always seen in pairs and are thought to mate for life, they’re part of local lore as winged symbols of fidelity. In Gujarat, the newly married are taken to see them, and, should they hear them call out to each other, come away feeling blessed with longevity. In UP, kids often quiz the cranes on the kind of wife their friends will have, and read arcane messages in the female bird’s movements.

All this means that even though this 6-ft bird causes no inconsiderable damage by nesting in the fields, farmers look upon it with affection. “I chase it away from my fields when it comes to raid my potato crops, but I like seeing it around...because it’s a good bird,” says Sugar Singh, a farmer on his way back to his village, accompanied by a dog with wary grey eyes. “It feels good to have the Sarus crane around; we’d never let anyone harm it.” Having a Sarus nest on your field does have its advantages too: this watchful creature can be counted on to call out in warning when the nilgai come to ransack the fields at night.

Sarus ‘displays’ include a Michael Jackson-like repertoire of moves such as the feather-shaking ‘ruffle threat’.

While it seems remarkable that such a large bird should be so adaptable, the Sarus has had time to get used to the ways of agriculture. This region has been under cultivation for around 10,000 years; what’s more, according to Sundar, it is credited with being the first to formally discover rice cultivation. The Sarus used to inhabit a larger swathe of the subcontinent until just about a hundred years ago—including the whole of UP, MP, Bihar, Gujarat, Rajasthan and Punjab. Today, however, it’s been hunted out in Bihar, and driven out of MP due to inhospitable modes of farming. In Punjab and eastern UP, its numbers have dwindled due to the hostility of dense, demanding populations. In Rajasthan and Gujarat, however, the picture is less bleak, with Saruses fanning out along the canal systems.

In this quarter of western UP, though, it feels like the cranes never left. Even place names echo the bird’s presence in the region’s life, such as Kurra, named after the Sarus’s cry, and Sarsai jheel, Hindi for Sarus lake. Interestingly, A.O. Hume, the founder of the Indian National Congress, was the district collector here in the 1800s. The canals he got dug then remain the farmers’ and cranes’ lifeline to this day. An avid birder, he took down field notes on the birds’ habitats from his inspection bungalows, which still dot the countryside, crumbling amid the undergrowth. 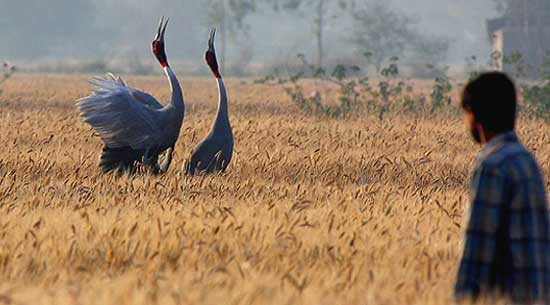 Today, just walking by the fields can help you fill an entire notebook with accounts of the everyday drama of the Sarus’s life. You’ll hear their unison calls to each other—swooning duets as distinctive as fingerprints. You’ll also see displays of ‘jousting’ to ward off intruders into its territory—a sort of dance-off with threatening moves—since physical fights would result in catastrophic injuries for a bird its size. The ‘displays’ include a Michael Jackson-like repertoire of moves, such as the feather-shaking ‘ruffle threat’, the ‘exaggerated walk threat’, and, even a skin-extending move which turns the bird’s entire head a pulsing, livid red.

Some of these moves might ward off fellow cranes. But they’re not much good at fending off the rampaging packs of rabid stray dogs, which, according to Sundar, bolt down a good 30 per cent of younger cranes. What’s even harder to hold off are other notorious pests—some of whom wear starchy white, and have appetites the size of the free-market. A case in point is the former UP chief minister and the area’s reigning strongman, Mulayam Singh Yadav, whose actions have endangered this habitat in more ways than one. In 2005, Yadav built an extension to the private airstrip leading to his home village, Saifai. This 2.5 km airstrip, which Boeings were meant to land on, previously comprised community-owned lands and farmed patches, and was home to 11 pairs of Saruses. As the locals tell it, the farmers were scared off and intimidated by his agents, but the cranes continued to dance unheeded, defending their slowly telescoping territory of marshland.

The Sarus’s range in India 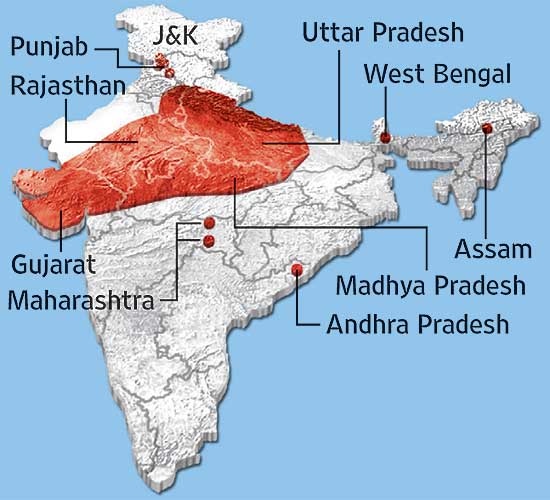 Eventually, the aviation authorities spoke out against Yadav’s plan, as the intended airspace overlapped those of airports at Agra and Kanpur. In addition, the Wildlife Protection Society of India filed an application against the UP government before the Supreme Court’s central empowered committee, the decision on which is still pending. “This airport used to be a huge wetland, so it has just about halved the number of Sarus cranes breeding in it,” recalls a still-indignant Sundar. “Besides, can you imagine what would happen if a Boeing was hit by a Sarus, the world’s tallest flying bird? It’s a suicidal plan all round. But anything that doesn’t vote is expendable.”

Nevertheless, today, it feels like the birds have won out somehow. Sarus cranes can be heard calling out from the marshland on either side of the runway, and the trees against the barbed wire-topped boundary walls are alive with the noisy yammering of jungle babblers.

A Hira With A Heart