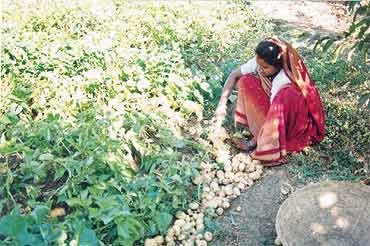 outlookindia.com
-0001-11-30T00:00:00+0553
Ishwar chahega toh is baar phasal acchi hogi. Mehnat ka phal hamesha meetha hota hai (God willing, this time we’ll have a good crop. Hard work always yields sweet results)," says Tara Bai, 30, lovingly stroking the tiny adrak (ginger) plants in a one-acre tract of land in village Singhpur of Sagar district, Madhya Pradesh. Four other members—all tribals and all women—of her Bhola Bhandari Sabji Utpadan Samhit Samooh nod their heads in agreement. For Tara Bai and her colleagues, this represents their only hope of freedom from what had become a vicious circle—their labouring in the fields only to find others enjoying the fruits.

Located almost a kilometre off the highway connecting Bhopal with Sagar, Singhpur is a small village of about forty houses. Barring three families, the village consists entirely of Gond tribals. Most of the families do own land but still end up working as labourers. Reason: lack of money to buy the "inputs" for their farms and also sustain themselves from the sowing to the harvesting season. Every year, rich landowners from the nearby villages strike agreements with them whereby the former takes care of inputs like seeds and fertiliser and the latter work the land—with the produce being shared equally by both. However, with deductions in the name of "interest" and other real and imagined expenses adding up to a bit, the tribal land owners are left with barely 10-20 per cent of the produce, which doesn’t leave much money for the following year.

Determined to get out of this rut, five women from the village decided to form a "common interest group". Inspiration came from Rais Khan, the local coordinator of the District Poverty Implementation Plan, a World Bank-aided anti-poverty programme. Group members pooled their resources to collect Rs 2,800 and they got a grant of Rs 38,000 under the programme to start growing vegetables. A one-acre plot of land, complete with well and irrigation pump, was taken on a one-year lease for Rs 5,000 and the venture got going.

Six quintals of potatoes were sown with an investment of Rs 10,000. The yield was poor, largely due to some of the plants getting a disease. The 80 bags harvested yielded only Rs 11,500—a profit of Rs 1,500 not taking into account the labour the group members put in. The next crop of ladyfinger and onion yielded a surplus of only Rs 200. Nonplussed, the group decided to deposit the entire amount into their bank account, keeping nothing for themselves and plunged into a third attempt. "Kheti mein toh yeh sab chalta hai (When you’re farming, all this happens)," a group member said, keeping up spirits.

That was last year. This time, they are growing ginger and groundnuts and if all goes well, they hope to earn at least Rs 40,000. "Last time round, they sold off their produce in a nearby mandi, where they got a lesser price than they would have at a bigger place. But then, transport became a problem. We consciously did not interfere. We allowed them to take their own decisions...let them learn from their mistakes," says Khan.

And the women have learned well. They are happy now in the knowledge that they’ve become self-sufficient, not even cowing down to threats from the zamindars. "Iske pehle maine bank nahi dekha tha (I had never seen a bank earlier)," admits Dhanna Bai, who accompanied the coordinator and others to a regional rural bank branch, eight km away, to open an account of their group. The menfolk aren’t complaining either. "Ab toh yeh seth ho gayi hai. Yeh paisey ginengi. Main chai banaoonga (Now she’s become a seth. She will count money. I will prepare tea)," says Tara Bai’s husband jokingly.

The group members have big plans for the future. "After this crop, we will buy more land and that will make our efforts more profitable," says Shakun Bai. To find out more about these enterprising women, contact: Tara Bai, president, Bhola Bhandari Sabzi Utpadan Samhit Samiti, Singhpur, Deori tehsil, Sagar district, Madhya Pradesh.

A September Of Sorrows