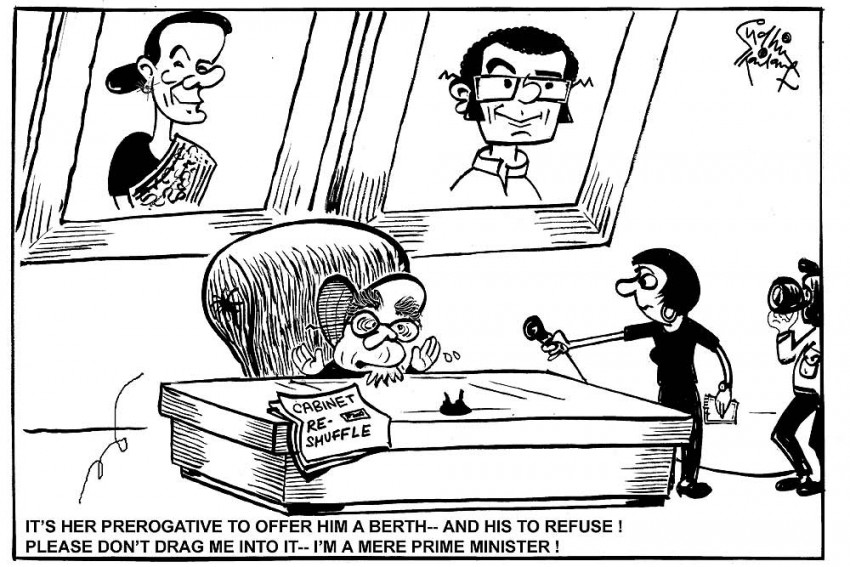 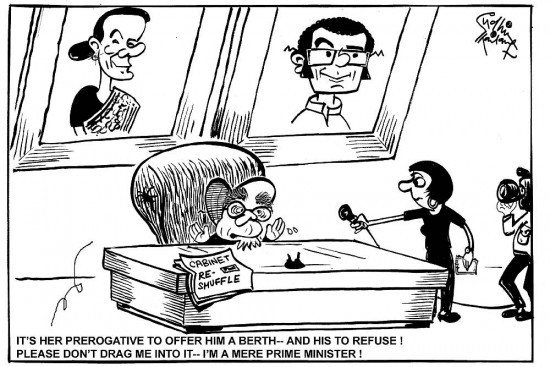 Poor Dr Singh, he’s a beleaguered man these days. Will he be remembered as the one who allowed allies to run all over him and the government, the one who remained mum on the policy gaffes, the scams and most of the crises facing the country? Well, think what you will but Dr Manmohan Singh isn’t your run-of-the-mill PM. As political carto­o­nist Sudhir Tailang puts it: “He wasn’t a challenge to anyone...except the cartoonist!” The dry, unsmiling robot-like character wasn’t really designed for the drawing board, though the turban became the nuclear orbit in many toons, while the small face, bushy eyebrows, scraggy beard and impeccable white kurta-pyjama, which “gave him the aura of an aged, starved but intelligent lion”, were highlighted by many cartoonists in prominent newspapers and magazines. “His big forehead came to my rescue. I enlarged it even more than from his FM days. His headgear hanging from the occipital part of his head—about to fall, but never quite! I alw­ays drew him as a tiny figure, mat­ching his political stature. That’s how I invented him,” says Tailang. 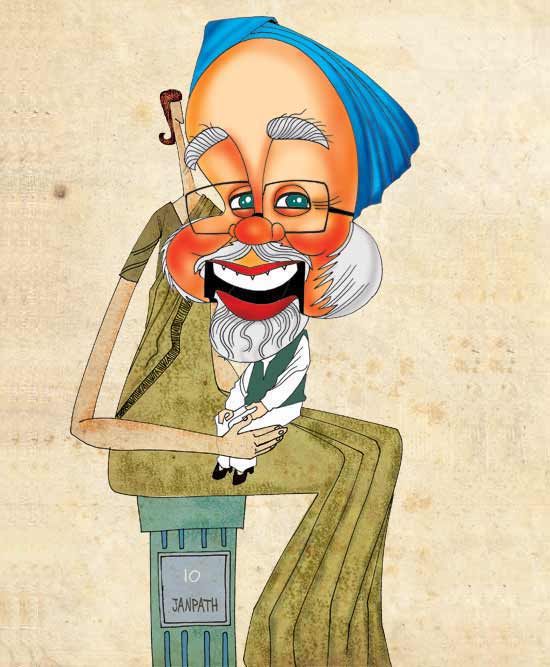 Cartoonists say it’s been quite the challenge to bring a ‘low-profile’ leader on to the centrestage of Indian politics. “When you have a clean image frontrunner, academically impeccable, without the foot-in-the-mouth symptoms and extreme reactions, cartooning takes a beating. And this is where Sonia des­tro­yed PM lampooning. Scams and other goof-ups then were a relief for us...to show him up as a dumb bystander scr­atching his beard,” says Ajit Ninan, chief graphic consultant, Times of India group. 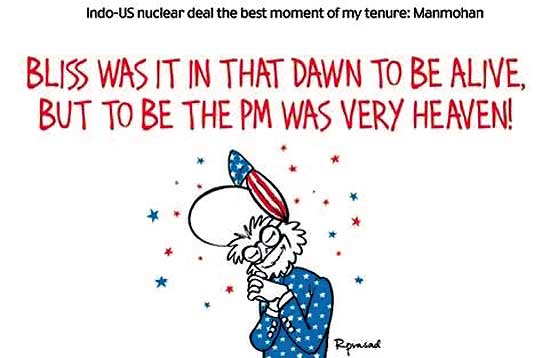 But when things came crashing out of the UPA cupboard, one could pin him down for the mess-ups. In fact, his performance as non-performing head of UPA-I inspired Tailang to publish No Prime Minister in 2009, complete with his top 150 cartoons. “I loved him when he staked his government to sign the nuclear deal with the US. His sole aim during UPA-II was to smash the aam aadmi who had re-elected the party. 2G, CWG and Coalgate etc were just extra perks he dished out for us cartoonists,” he says. And gradually, as his halo began to fade, the cartoonist started taking liberties. The turban moved back, more of his forehead appeared, the nose started to shrink to insignificance. “By now, I think most of the cartoonists can draw Dr Singh faster that William Shakespeare signs his name,” says R. Prasad, chief cartoonist of Mail Today. Well, the worst parts of a PM’s persona can sometimes become the best for caricature.

But E.P. Unny, chief political cartoonist of The Indian Express, believes that caricature happens when the reader has already connected to a public figure. “In the case of Dr Singh, this association was far too minimal earlier for any cartooning to flourish. So, you’re forced to stick to a rubber stamp caricature. He fitted well into a single column pocket of the newspaper, but would have been lost in a three-column display.” 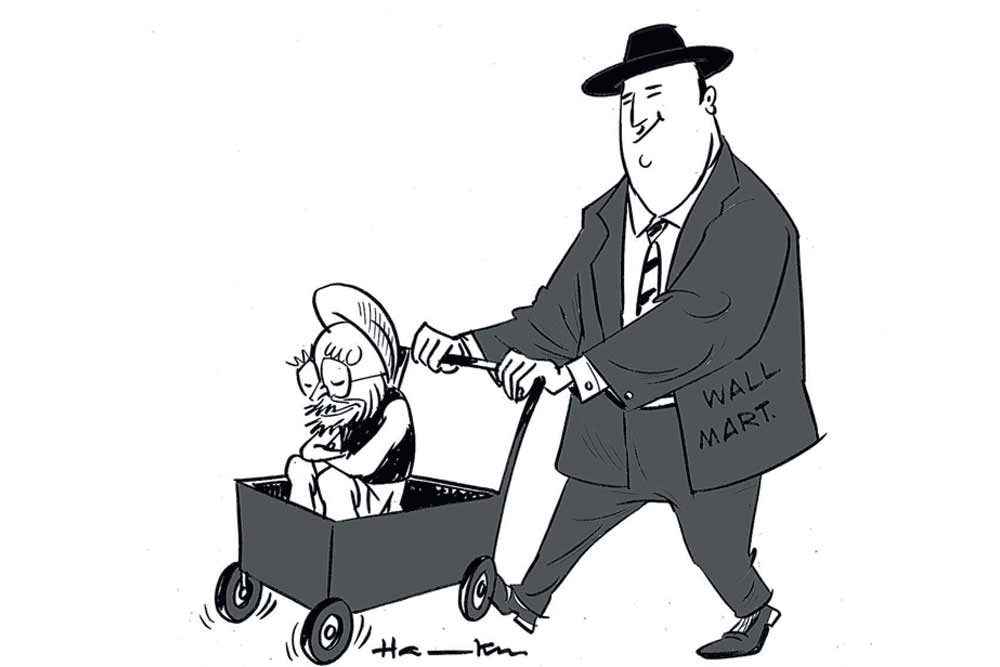 Still, sometimes silence speaks louder than words. Hari Kumar, a Kerala-based cartoonist whose Varayil Viriyunna Man­mohan (a collection of 75 Manmohan cartoons) was published last month, feels the PM’s “action-less, soundless nature” did work to the advantage of artists. “The man has character and that is enough for a graphic artist.” Unny says “even Nara­s­imha Rao, Singh’s mentor, was famously silent in every one of the 14 or so langu­ages he knew. And by way of gestural language, all he gave you was a prime ministerial pout. Warning enough for what was to follow”.

Now that the tenure of the ‘accidental PM’ draws to a close, will his caricatures live on? Tailang says, “He was one PM who may have failed the nation, but never let the cartoonist down. He was like a lame duck on a dry day, too much of a good thing that lasted far too long. But a leader’s importance in politics can be measured by the number of cartoons he appears in. By that standard, I can say Singh is King of my drawing board.” 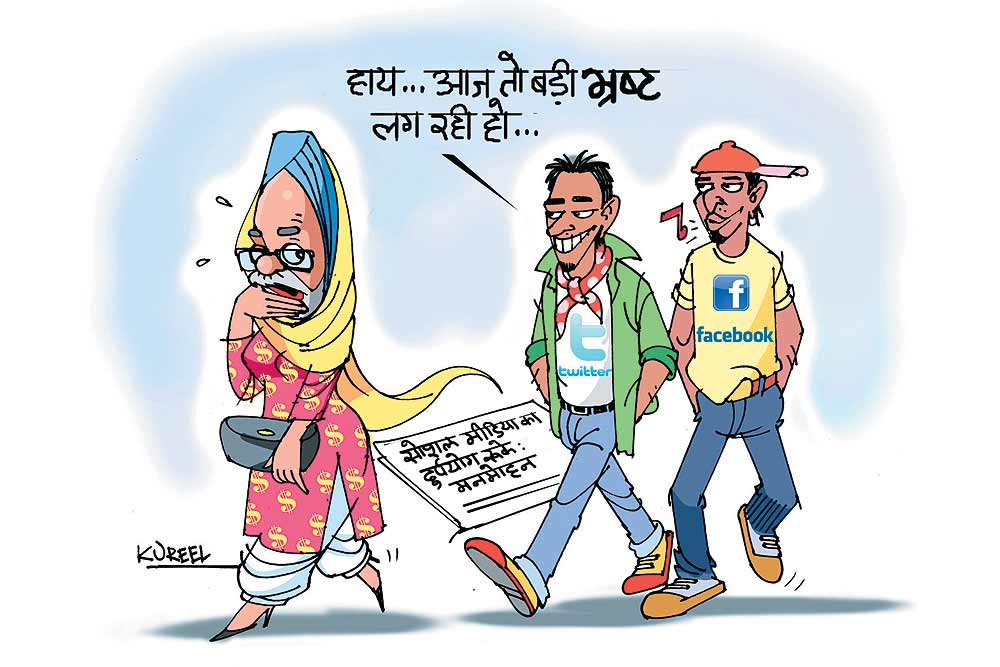 Ninan gives the parting illustrated shot on the Yes Man of politics: “The figurehead of the UPA sailing ship, hogtied right up front with a gold-wired halo over his turban, gagged and blindfo­lded. Behind him rowing are the pir­ates (allies) whose oar ends have wads of notes, the sails have logos of the UPA friends and right at the back is Sonia at the wheel with a clear view on what’s happening.” Roll down the sails, mateys.

When No One Spoke Up