There are many facets to Jayasuriya, but all of them can be summed up in one phrase, a quiet achiever. Or Simply Sanath, shall we say? 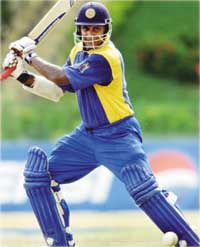 outlookindia.com
-0001-11-30T00:00:00+0553
Some have branded him Butcher of Matara. Others prefer the more subtle Matara Marauder or even the Matara Marvel when they want to talk about him but, left to himself, it is more likely than not that he would tell you that he prefers to be called simply Sanath. Come to think of it, 'Simply Sanath' goes well with his approach to batting—direct and uncomplicated. It also reflects his unique approach to captaincy—simple and straightforward. Above all, it mirrors his philosophy of life.

He may lack the statesmanship of an Arjuna Ranatunga as captain or the style of an Aravinda de Silva at the batting crease, but from the time he exploded on the international stage as a pinch-hitting opening batsman in 1995-96, Sanath Jayasuriya has been able to quietly achieve so much that he will always be regarded one of Sri Lanka's finest sporting champions.

You do not need statistics to substantiate the fact that the 33-year-old is a pillar of the Sri Lankan cricket team as it prepares for the 2003 World Cup in South Africa. The blades of Herschelle Gibbs and Virender Sehwag may produce the staccato bursts more often now than Jayasuriya's, but few captains will risk ignoring the real threat that he poses to their bowlers.

Several years after he gave notice of his big-hitting, bowlers around the world still respect him and his wonderful gifts while captains continue to scratch their heads, wondering how to set fields to the aggressive left-hander. Long after he puts down his blazing bat, Jayasuriya will be remembered as one of the first executioners of a strategy adopted by nearly all teams now.

Of course, India's own Krishnamachari Srikkanth pioneered the audacious strokes over the in-field early in the innings. But it was Jayasuriya, along with Romesh Kaluwaitharana, who set lofty standards as pinch-hitting opening batsmen.

There were not few who reckoned Jayasuriya depended so much on eye-hand coordination that he would run out of steam as he grew older. But at 33, he has shown no signs of slowing down at all. Two hundreds in successive VB Series matches against Australia and England last week are convincing evidence. The back-to-back centuries in Sydney in the VB Series are ominous warnings for teams in the World Cup—Jayasuriya remains hungry as ever.

He is so strong mentally that he does not appear to worry needlessly over who is bowling. For him, it is the ball that he is playing, not the bowler. He is fairly quick on his feet, getting into position to play his strokes with the minimum of fuss. He works the ball really well off his legs and punishing the short ball ruthlessly as it were and can send the ball high over the in-field when the ball is pitched up to him. Then again, he is no mere slogger. The 10 hundreds and 22 half-centuries in Test cricket bear testimony to his overall quality as a batsman.

Nobody was more aware than Jayasuriya that Ranatunga was always going to be a hard act to follow as Sri Lankan captain. Small wonder then, he took quite a while to settle down. In fact, he has gone on record saying he was shocked when handed the reins of the team before the aiwa Cup at home in 1999. It took him a good part of three years to evolve as captain, leading the Test team to nine successive victories at home.

There has been criticism of his captaincy by consensus—he tends to convene mid-wicket conferences—but there can be no doubt that he has been a quiet but very strong influence on Sri Lankan cricket. He played no mean hand in the return of De Silva to the team, has handled his bowlers really well, takes care of the newcomers in the side and, above all, has got along well with coach Dave Whatmore. All this ensures harmony both on the field and in the dressing room.

He has seen it all. The high of a World Cup conquest in 1996 and the low of a dismal tour of India two years earlier, the agony of sitting out with injury and the ecstasy of being named Most Valuable Player of the World Cup, the despair of a divorce, which affected him before the 1999 World Cup, and the delight of the birth of his daughter last February.

Scoring runs and leading his team to victory may be top priorities, but Jayasuriya has shown his heart is in the right place, devoting time as an unaids Ambassador of Goodwill and in getting his team to support the Hope Foundation's bid to build a cancer hospital in Sri Lanka. These are but two examples of his wanting to contribute to the society at large.

For one who grew up reading about the exploits of Vivian Richards, and Sunil Gavaskar, Jayasuriya has not done badly himself. Indeed, there are many facets to Sanath Teran Jayasuriya. But all of them can be summed up in one phrase, a quiet achiever. Or Simply Sanath, shall we say?