Polo closed a season of yawning dullness with a modicum of elegance. Never mind that no one understood the game. 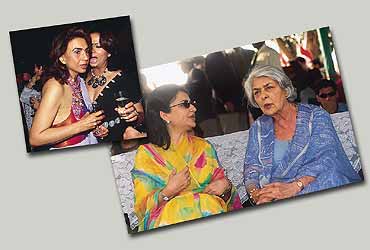 outlookindia.com
-0001-11-30T00:00:00+0553
It was the quietest year on the social scene—you could call it the really silly, silly season. With the economy still as sluggish as the waiters at a gymkhana club, society wound down and counted its blessings. And nowhere was this glaring absence of air kisses more apparent than the fashion scene—Delhi, that bastion of dressmakers, saw most of them hide behind the petticoats of India Fashion Week (IFW). Mighty names like Rohit Bal, Raghuvendra Rathore and Suneet Verma showed just once at IFW. When Vijay Mallya held his Kingfisher Fashion Awards in Delhi, he tried to make it as ebullient as possible—he even kept the Moet et Chandon flowing—much after he had delivered a respectful eulogy to the Vice President who had passed away that morning. He tried to roll up the enthusiasm but there was not a bat-squeak of response from a jaded, dull audience.

Delhi was, in a phrase, Fashion Siberia. In Mumbai, Parmeshwar Godrej continued to work the stuff. Whether it was old buddies like Richard Gere or the ditzy, all agiggle Goldie Hawn, Godrej kept the line-up of limos to her sumptuous Walkeshwar pied a terre buzzing with the energy of a hundred well-dressed bees. She did it in style—low lights, candles, sit down dinner quite nearly on the sea, and then she’d hop a flight and jet off. The only one who matched this glamour was Samajwadi Party leader Amar Singh, whose Hollywood meets Bollywood via De Mille parties had all the flashbulb-popping drama of an Oscar night.

Finally, for anyone who had seen it all, there was only one thing to do—go watch polo. That dusty game of yore came into its own with mega-sponsorships, High Teas high enough to make a queen keel over, stands jammed with Prada-packing socialites screaming for their favourite stud and with many Polo Balls to follow there was just nothing for the poor girls to wear. Still, it closed a season of yawning dullness with a modicum of elegance. Never mind that no one understood the game.