Silk Route For The Pacific

A carnage of silkworms makes a saree. An entrepreneur now weaves ahimsa in it. 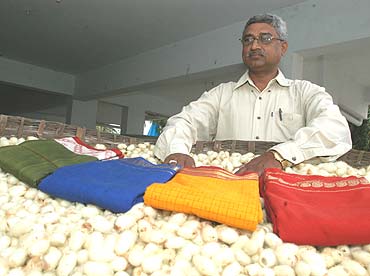 outlookindia.com
-0001-11-30T00:00:00+0553
Did you know that 15 silkworms are killed to produce 1 gram of silk? A silk sari with all its elegance and shimmer comes at a price of 50,000 silk worms. While you do hear animal rights groups protesting the use of leather products, we seldom hear a voice against the manner in which silk is produced.

One little known voice of compassion comes from Hyderabad, where Kusuma Rajaiah—after years of research—now produces silk without killing the worms. A senior technical officer with APCO (Andhra Pradesh Handloom Weaver’s Cooperative Society), Kusuma’s search for eco-friendly and humane silk dates back to the ’90s when Janaki Venkataraman, wife of former president R. Venkataraman, asked for a silk sari that did not involve the killing of worms on her visit to APCO. The same request cropped up in 2000, when Amala Akkineni, actress/dancer and animal activist, visited APCO.

Silk comes from the cocoons of the silk worm (bombyx mori). In the silk industry, cocoons are killed by steaming or dropping them into boiling water when they are ten days old, before they metamorphose into a moth. The silk is believed to be the finest at this stage. This is preferred because when the cocoons open naturally at one end, to release the moth, the continuity of the fibre is lost. But maybe not, thought Kusuma.

He purchases cocoons from mulberry farms in Chittoor district. The yellow coloured cocoons are reared in large cane baskets at his residence in Hyderabad. The moths emerge after 8-10 days, piercing the cocoon at one end. "The adult moths have a short life span of four days. During this time they mate and die naturally," Kusuma explains. The pierced cocoons are spun into yarn. This is then woven into fabrics. Weavers of Nalgonda and Ananthpur district of Andhra Pradesh produce dhotis while fabrics, including saris, are woven by the weavers of Karimnagar district. "All my products are done on handlooms and benefits several weaver families," says Kusuma. Inspired by Mahatma Gandhi, he calls this silk ahimsa. While ahimsa silk may lack the shine of regular silk, it is comfortable to wear. It’s also wrinkle-free and has a better fall.

Kusuma received the patent for the eco-friendly silk last year. The new silk is favoured by the likes of Sheila Dixit and Maneka Gandhi. If the rustle of silk still distracts you, it’s time you met Kusuma Rajaiah.