Published 22 years after his death, it discloses no secrets, washes no dirty linen, and breaks no idols. Not a participant's account, but a scholarly narrative of the dealings of the Congress in the 1920s-1940s. 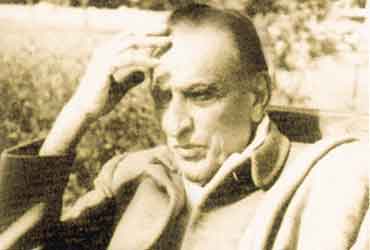 J.B. Kripalani is little-remembered today. But he was one of the famous men of our Gandhian era. He joined Mahatma Gandhi even before Rajendra Prasad, Vallabhbhai Patel and Jawaharlal Nehru did. Kripalani was teaching in a Bihar college when the Mahatma went to Champaran to look into the plight of indigo growers. Gandhiji and Kasturba addressed him as Professor. Kripalani acquired the label Acharya because he was principal of the Gujarat Vidyapith for some years.

Kripalani was only a year older than Nehru but he was regarded as a part of the Congress old guard. He was general secretary of the Congress from 1934 to 1945 and ran the AICC office with a hawk’s eye. He was president of the organisation at the time of Independence. With his high forehead, strong jaw, hooked nose, outspoken manner and caustic prose he evoked much awe, but not much of affection or personal following.

When freedom came, he declined Nehru’s invitation to join the cabinet. With Gandhiji gone, Kripalani had strong reservations about the way the Congress and the government were being run. In 1951 he broke away to form the Kisan Mazdoor Praja Party, which he later merged in the Praja Socialist Party in spite of his life-long reservation about socialism. He was elected to Parliament four times, moved the first no-confidence motion against his old colleagues, and in his philippics he bitterly denounced the fall in public morality. The last major act in his life was to have shared with Jayaprakash Narayan the responsibility for picking Morarji Desai to head the Janata Government. He died in 1982 at the age of 94.

Now, 22 years after his death, his autobiography has come out. This gap makes one ask whether it contains anything which the author did not want to reveal in his own lifetime in order to spare embarrassment to his contemporaries. It was for this reason, it might be recalled, that Maulana Azad held back one chapter of his memoirs to be made public thirty years later. I can say, going through this massive tome of nearly a thousand pages, that it discloses no secrets, washes no dirty linen, and breaks no idols.

The reason for the delay appears to be more mundane. The Acharya was well past eighty when he yielded to his admirers’ pressure to write the story of his life. He did not have the health or the will, after the death of his wife, to apply himself to the task. He had not maintained notes and was not sure of his memory. He says as much in his preface.

An Afterword by his secretary, N. Krishnaswamy, explains that he and his literary collaborator, the socialist historian Haridev Sharma, assured Kripalani that they would check the names and dates and fill in the documentation and references. This must have taken time. It certainly seems to have added to the bulk of the book and also changed the texture. Instead of reading like a participant’s account it has become a scholarly narrative of the dealings of the Congress in the 1920s-1940s.

The chapters relating to the post-Independence period, however, have not received the same editorial attention because Krishnaswamy and Sharma too passed away well before the book could be brought out, leaving it to the publisher to make whatever he could of the manuscript. The chapters relating to this period are, understandably, patchy. Some of them seem to be articles Kripalani wrote in his weekly journal Vigil. And a few are summaries of his speeches in Parliament.

The result is that the book is really two in one -- a detailed history of the Indian freedom movement under Gandhiji and a rather unforthcoming autobiography of an austere political person who has no interests beyond public life. Kripalani does warn us in the preface: "There is as little of the 'I' in it as is necessary. This, in an egotistic age like ours, should be considered not as a drawback of the book but its merit. "

The result, as pointed out, is that the historical narrative does not tell us anything strikingly new, except that it brings out Kripalani’s conviction that the main reason why Gandhiji and the Congress were so determined to launch the Quit India movement was that they believed that the British had no intention to defend India against the Japanese. Another of Kripalani’s objectives seems to be to refute the claims of Jinnah and some assertions contained in Maulana Azad’s India Wins Freedom.

What he says of the Partition plan is vintage Kripalani: Those who divided India had very little knowledge of the composite character of Indian culture as it had grown after the advent of the Muslims. The higher British officers in the government rarely came into contact with the Indian people except at formal functions. They therefore acted in consonance with the British imperial genius. It is to rule the country through the policy of  'divide and rule’ which kept the communities apart during their rule. When they were obliged to leave they gave the last kick to the people by dividing them. They divided Ireland; they divided Palestine; they divided Cyprus. They would have divided America but the north Americans refused to play their game."

If the history portion is guilty of taking us over familiar territory, the autobiographical portion is guilty of telling us too little of the man and what went on in his heart. This must be one of those rare memoirs in which the author doesn't even give his date of birth or his father's name. "I do not even know the exact time and date of my birth", he says in explanation. "My horoscope, along with my papers and books, was taken away by the police in a raid when I was in Bihar and never returned."

The book begins promisingly enough by giving a picture of the Sindh of his childhood days. Kripalani was the sixth of seven brothers and two sisters. Two older brothers became Muslims and one joined the Turkish army and died in a war with Italy in 1912. The younger brother became a sanyasi and lived in Rishikesh. But we do not hear anything more of his family but only of the larger Congress family with whom he threw his lot.

I would have thought that with his reputation for outspokenness, Kripalani would share with us his assessments of his great contemporaries. He is critical of Jawaharlal Nehru's habit of hogging the limelight and acting like a spoilt child. Kripalani cannot understand how Gandhiji could declare that after he was gone Jawaharlal would speak his language. Kripalani finds nothing Gandhian in Nehru's economic thought or foreign policy. Gandhi's attachment for Nehru, in Kripalani's opinion, defies intellectual analysis. One reason could be that "Gandhiji was always anxious to draw nearer to himself those who opposed him!", and "like a good shepherd, he left the many who were going straight and ran after the one going astray!" (Page 169). This theory does little justice to Kripalani who elsewhere claims that next to Gandhi the person he was most fond of was Nehru. Kripalani has fewer problems with Sardar Patel. He admires Patel's realism but he does not fail to record that the Sardar was not too fastidious about the means he adopted.

One of the tests of an autobiography is what the author says about his married life. Kripalani and Sucheta made an unusual couple. She was twenty years younger and Kripalani was in his late forties, and the general secretary of the Congress, when they married. Gandhiji was against the wedding. He was used to thinking of his disciple as a confirmed bachelor. The Mahatma told Sucheta not to deprive him of his right hand. She reluctantly agreed. But what does the great Mahatma then do? He orders Sucheta to marry somebody else, anybody else, so that Kripalani would have no regrets. That was too much for her. Kripalani too remonstrates. He asks Gandhi to have some thought for what would happen to her reputation, not to speak of his. Gandhi comes round and says he will pray for them. This is far short of the blessings they had sought, but the two go ahead and marry according to Brahmo rites in Banaras. It is followed by a civil registration in Anand Bhavan, with Nehru signing as a witness. And can you believe it? The story does not form part of the main narrative but is given in an appendix! But it is movingly written and shows how deep Kripalani's emotions ran.

At the midnight session of the Constituent Assembly when freedom was proclaimed, the national anthem was sung by Sucheta Kripalani and her niece by marriage, Nandita Kripalani. On Page 718 Kripalani says they sang the Bande Mataram. But on Page 919 Nandita's husband, Krishna Kripalani, says in another appendix that they sang Jana Gana Mana, followed by Sare Jahan se Achcha. What did they actually sing? It is interesting to note that Kripalani himself was not present at the Central Hall function, although he was president of the Congress at the time. He was in Calcutta, like his master, and he went to the house of a friend who had a radio set to hear the national song "sung by those whom I loved."

Kripalani began writing the book during the Emergency. His preface is dated 10 January 1982. This would lead readers to expect that he would have something to say about the Janata Party and the government it formed. After all he and Jayaprakash Narayan were its godfathers. But there is no reference to the Janata interlude. Perhaps Kripalani was too ill to write about it. An explanation of this omission could have been provided by either N. Krishnaswamy in his 'afterword' or by the publisher in his 'note'.

Extracts from this review appeared in the print magazine.