The tagline for Signs goes: It is not like they did not warn us. Let us warn you that Signs certainly does not live up to its hype. To watch it or not: it is all at your own risk. 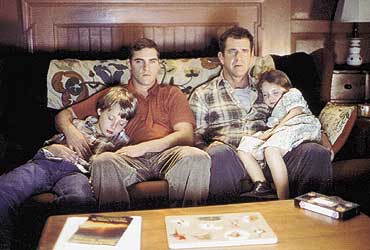 The Newsweek cover heralded him as the next Steven Spielberg. If Signs is any indication, the magazine seems to have stuck its neck out rather hastily. After the self-assured and engrossing Sixth Sense and Unbreakable, Shyamalan's latest proves to be a huge artistic disappointment, its success at the US box-office notwithstanding.

In keeping with his trademark style, Shyamalan tries to create an eerie mood with foreboding images—the stark, still garden, rustling fields, the gently moving swing seat, the shadowy figure on the rooftop, and the ominous quiet punctured by the loud bark of a dog. He underscores the lingering sense of menace with sudden jolts—a rather musty, moth-ridden way of evoking fear. That too for no end because there is no great suspense or surprise at the heart of these dark atmospherics. For a long while, you keep waiting for things to happen. They never do. Shyamalan's USP has been to build his movies like colossal puzzles, scattering clues all through and then crowning the action with a knockout revelation. However, there's no novel twist in the tale here. The end is not just obvious but gimmicky. The power of the suggested, the unknown which made Shyamalan's earlier works unsettling, goes missing here.

It's the content that's to blame. Signs works on a confused storyboard. What's Shyamalan trying to say anyways? Nothing, or rather a bit too much. The film, at once, tries to be a sci-fi thriller, an emotional drama as well as a religious discourse and is unable to juggle with the elements effectively. At one level, it's about the family farm of Graham Hess (Gibson) being overrun by extra-terrestrials. Then it's also about the Hess family coping with the death of his wife. Most importantly, it's about Hess, a former priest's return to faith, a discussion that doesn't go deeper than some mumbo jumbo about coincidences and miracles. There are some bright moments of humour, thanks to the two kids: cherubic Bo (Breslin) with a fetish for contaminated water, and the know-all Morgan (Culkin) who designs aluminium foil hats so that aliens may not read their minds. The talented young actor Phoenix is underused, all to play out a baseball duel with aliens. Gibson fails in his attempt to move away from action to histrionics. He sports a hang-dog expression to convey the introverted nature of his character. Shyamalan's easy touch gets contrived and lazy in Signs. Or else, how do you justify a faux Bangalore being passed for the real on the TV news within the film? The tagline for Signs goes: It's not like they didn't warn us. Let us warn you that Signs certainly doesn't live up to its hype. To watch it or not: it's all at your own risk.

Banjara Barons Live It Up On The Hill