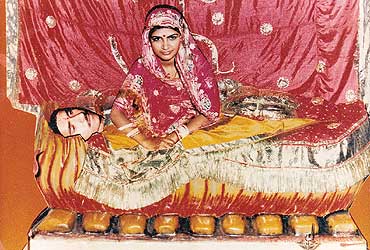 Sen tries to reconstruct the lives of these women: Roop Kanwar's through discussions with her own family and that of her in-laws, Selvy's through long interviews with her, and Kurrupayee through interviews with jail officials, ngo activists and her family. Not surprisingly, while Roop Kanwar and Kurrupayee remain shadowy presences in the narrative, it is Selvy, alive, full of energy and questions, who stands out. Nonetheless, it is Roop Kanwar's narrative that occupies much of Sen's book, and it is here too that she herself feels the greatest contradiction for, try as she might, she cannot bring herself to dislike Roop Kanwar's father-in-law, Sumer Singh (or indeed other members of his family). She knows he is lying, that Roop Kanwar's death has benefited him a great deal, that some things (a refrigerator for example) she left will serve as dowry for his daughter, but she is still able to make conversation with him, and cannot see him as a diabolical murderer. Instead, it's Roop Kanwar's brother who emerges as boorish and indifferent.

Sen's conclusions are not new—and they are all the more chilling for that—that despite what we call modernity and development, violence against women continues unabated and women's own desires and needs count for nothing. And further, that such violence masquerades as tradition and culture in the most insidious of ways. For many Indian readers, the material in Sen's book may not be new, culled as it is from existing and well-known sources, but there is a way in which this sympathetic and non-sensationalist account can be useful as an introduction to the many complex strands that are tied up in the way Indian society treats its women.