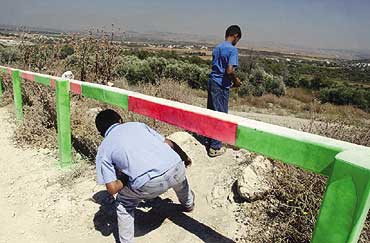 outlookindia.com
-0001-11-30T00:00:00+0553
Unable to curb Palestinian suicide bombers, Israel has now decided to fence its border with the West Bank and also the periphery of Jerusalem. Measuring a total length of 350 km, the fence will itself have the ‘protection’ of a buffer zone. The Israeli Defence Forces (IDF) will operate and control this sanitised strip, consequently creating insurmountable obstacles for a Palestinian bomber wishing to slip into Israel. The idea of the zone was mooted because of Israel’s experience in Gaza: Palestinian boys there would shake the fence, sending the Israeli security on a wild goose chase, ultimately lulling them into lowering their level of alertness. No Palestinian will be allowed into Israel, and their movement in the West Bank too will be under IDF’s supervision. The fence will impact severely on the Palestinians, most of them employed in Israel. And the West Bank could discover, as Gaza has, that deprivation and food scarcity are the price to pay for living in isolation from Israel.

There are also implications for Israelis—they’d be psychologically separated from the 150 Jewish settlements in the West Bank, and treating anything beyond the fence as not ‘proper Israel.’ Is the fence a symbol of Israel’s failure in countering terror? No, argue officials, pointing to the decision to re-occupy parts of West Bank after last week’s bomb blast in Jerusalem. In other words, Israel is neither tired nor defeated. But with Israel also deciding to control the movement of Palestinians in the West Bank, there could be the danger of creating ‘deeper buffer zones’ beyond the buffer zone. Just how many fences can Israel erect between itself and the suicide bomber?