Sonia's children charmed the Amethi-Rae Bareli crowds, rekindling hope that they might contest 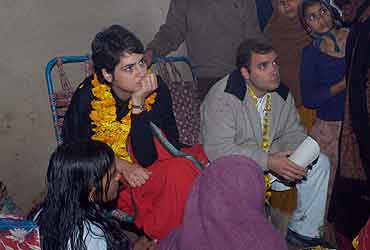 outlookindia.com
-0001-11-30T00:00:00+0553
She has her grandmother’s charm. He his father’s endearing smile. And though he still hasn’t started to speak ‘prophetically’ about heralding a technological revolution, for many he is the reincarnation of Rajiv Gandhi. The brother-sister duo of the first family of the Congress, Rahul and Priyanka, have certainly swept the people of Amethi and Rae Bareli off their feet. Public response to their visit has been ecstatic.

The duo did everything that a candidate does before an election—meeting party workers, interacting with the masses and holding closed-door sessions with the local leaders in the Gandhi dynasty’s home constituencies. But despite the news cameras following every move they made, they shrewdly managed to remain ambiguous when asked the big question: will they join active politics?

Even as the two chanted the ‘don’t know/can’t say/ perhaps later’ mantra comes news that both Rahul and Priyanka have become primary members of the Congress. No one in the party is clear about whether the duo will contest elections this time. But Congressmen point out that the buzz within the party is that there could be a surprise.

The atmosphere at Amethi- Rae Bareli itself was anything but apolitical wherever the siblings went. Row after row of enthusiastic Congress workers queued up patiently for ‘darshan’. They saw Rajiv in Rahul and Indira in Priyanka. The excitement was unmistakable.

Priyanka, as usual, proved the more outgoing of the two. Rahul preferred to remain in the shadows, letting his sister do most of the talking. He watched her almost as if he was learning the ropes. Priyanka, of course, is a natural. She has a way with people and does not ignore the ordinary party worker. In fact, she spends less time with party office-bearers, a fact that has not gone amiss.

No wonder, the buzz in the Youth Congress and Seva Dal cadres was that Priyanka was going to contest from Rae Bareli and Rahul would get Amethi. Each time the Gandhi children stoop to conquer, expectations run high in Amethi and Rae Bareli. The added attraction this time was the two were ‘campaigning’ together.

Priyanka herself seemed unfazed by these great expectations. Sonia’s daughter went about her task, mingling with the crowds, sitting at the doorstep of a Dalit home and enquiring about the family’s well-being almost as if they were her long-lost relatives. "Tumhaari saas kahan hai? Tumhari dekh bhaal karti hai ya nahin? (Where is your mother-in-law? Does she look after or not?)," she asked of a breathlessly happy young bride in Katnapur village in Amethi. And when the saas came bustling in, she turned around to enquire, "Tumhaari bahu kaam karti hai, paisa bhi kamaati hai. Achha lagta hai na (Your daughter-in-law works and she also earns money. Doesn’t that make you feel good)?"

Rahul, on his part, was content to chat up with children, keep cameramen at bay if they got too close. He and his sister also went to check on the progress of some women’s self-help groups, the ostensible purpose of their "purely routine" visit. As it turned out, it proved to be a carefully choreographed part of the party’s campaign. A cameraman, assigned by the party, followed them around and recorded even closed-door sessions with workers. Nothing was left unrecorded.

So will they, won’t they? Both of them neither deny nor confirm the rumour that they might join politics. But the people clearly love the air of suspense and speculation. The Congress can only hope that the Gandhi children’s fleeting appearances are enough to shore up its prospects in Uttar Pradesh.

"Everyone Wants To Know If We Are Contesting"