A refreshing change in the arid world of Bengali cinema, particularly for a clash of histrionic skills between Sharmila and Rakhee. 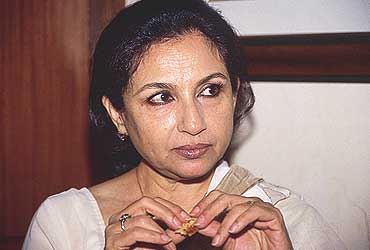 Rituparno Ghosh's latest offering, Shubho Mahurat, finds him doing what he is best at—making films with a woman-centric theme. But wait. Here his women will murder to settle old scores. And a jeans-clad young woman film journalist who gets caught in the thick of events espouses the cause of loving two men at the same time, but with equal sincerity. They are no longer the typical, vulnerable middle-class women who get the wrong end of the stick and are stuck in a dreary urban Bengali existence of mosquito nets and taant saris.

Yet Ghosh's Miss Marple—Bengalified as Rangapishi and played by Rakhee—is as soft and fair as they come with a razor-sharp mind, and ears and eyes that do not miss anything, a trait so essential to sleuthing. Her nose too, when she tells her journalist niece to feel free to smoke outside the bathroom provided she restricts the habit, while passing on one or two to her as well.

An ageing actress played by Sharmila Tagore returns to produce a film directed by her husband who has never made it big despite having the talent for it. The lead actress, a junkie, dies foaming at the mouth while being interviewed by the journalist at her residence on the day of the muhurat. Can the life of an out-of-towner freelance journalist (Nandita Das) get any better or exciting than this? As she is drawn to the world of police investigations and the seamier side of tinsel town (read Tollywood), her narration of events help her Rangapishi to piece together the case. In the best of English crime thriller tradition, the motive of the crime and its detection is more important than the actual conviction. The 'secret' remains safe within the folds of Rangapishi's pristine white sari.

The chatty bhadralok dialogue sprinkled with some of the choicest khistis (abuses) which surprisingly has earned the film an adult certificate, the exposure of petticoat drawstrings rather than the naked body, the obligatory Rabindra sangeet sung by Anindya Chattopadhya of Bangla rock band Chandrabindoo—the singer also acts in the film—make the film eminently watchable.

But Ghosh, who tackles such a subject for the first time, fails to turn it into a gripping film noir. Yet, Shubh Mahurat is a refreshing change in the arid world of Bengali cinema, particularly for a clash of histrionic skills between Sharmila and Rakhee. Das as the young journalist manages not to keel over under the pressure of the veterans. Ghosh is a smart and slick story-teller, and he's getting better at it with every film.