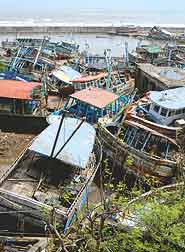 It couldn’t have come at a worse time for Indian seafood exporters. After being saddled with a 9.75 per cent anti-dumping duty by the US department of commerce, the MPEDA (Marine Product Exports Development Agency) had scaled down this fiscal’s exports target marginally—from $1.33 billion in 2003-04 to $1.3 billion this year. Now, in a worst-case scenario, exports could come down a further 10 per cent, feels Seafood Exporters Association of India president A.J. Tharakan.

However, Tharakan quickly adds that it’s early days yet to compute the precise impact since it would take at least six months for normal fishing to resume and to gauge the extent of ecological damage. His personal guess is that since the damage was limited to the southwest and southeast coasts and much of the harvest from the aquaculture (inland beach) farms was over before the tsunami hit, the industry would be able to offset possible shortfall in the months ahead. The MPEDA too has prepared a preliminary report, which points to a minimal impact. The reason: shrimp exports account for 70 per cent of marine exports and 80 per cent of the former comes from aquaculture farming, as opposed to sea farming.

The estimated loss in the aquaculture sector, featuring mainly the black tiger variety of shrimp, is only Rs 10 crore. The production estimate for the year is 1,12,000 tonnes on a total 1,52,000 hectares. Out of the 1 lakh farmers engaged in aquaculture, 92 per cent comprises small farmers who own less than 5 hectares each. Yet there is another variety, the scampy, grown in freshwater farms. The current production is estimated at 36,000 tonnes on 40,000 hectares. It has also been pointed out that since the number of fishing craft and vessels scouring Indian coastal waters is in excess of the required optimum levels, layoffs on account of the tsunami havoc will not affect effective catch. For instance, Kerala has over 3,000 registered mechanised vessels, but the actual number is double this figure.

However, things can go bad. That’s because exports in 2003-04 totalled 4,12,017 tonnes and were valued at Rs 6,092 crore. Of this, the southern ports of Chennai, Tuticorin, Kochi and Vizag—many of them affected by the tsunami—contributed a lower 1,68,507 tonnes in volume terms, but a hefty Rs 4,511 crore in value terms. Besides, most of India’s exports go to nations like the US, Japan and others in Europe. These are countries that shy away from buying products if they are apprehensive about supply and quality.

Apart from exports, domestic consumption of sea fish has come down drastically, with TV channels beaming recurrent visuals of floating bodies. What worsened the situation was an sms message that did the mobile rounds—allegedly put out by poultry owners in Bangalore—warning people about a virus in the post-tsunami fish. The scare about the "zulican" virus was found to be fictitious by the Central Institute of Fisheries Technology. People, however, are still unconvinced about resuming their traditional fish diet as of now.