Two cheeseburgers and one Big Gulp with a gun stuck in it are not enough to make this a big-cheese parody of cop shows or junk food realities. 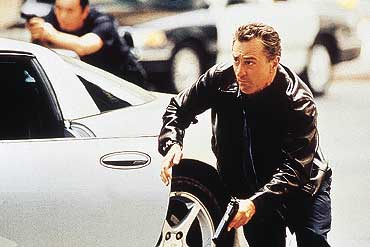 In a superb tweaking of the 48 Hours cast, pairing Eddie Murphy with De Niro instead of Nick Nolte, this movie should send you dashing out and pumping butter over jumbo popcorn. But before you can hum Axel F for Murphy, a Beverly Hills cop, fourth time around, he goes from cop to detective because this is Showtime, a hood-jumping, car-chasing flycam spoof of TV cop shows, in which, had everyone put their hearts in it, the laughs would've sounded louder. In this buddy-cop movie, where bad guys have big guns that make Uzis and Mac 20s look like lollipops, the send-up of TV cop shows slips in early. An over-eager Murphy botches up De Niro's assignment. De Niro, caught on a TV camera, shoots its lens inwards. Making De Niro the instant Dirty Harry that the stunning Rene Russo has been prowling around for, to star in her reality cop show. So now, in lieu of turning in his badge, De Niro plays real-time hero for television. Where does Murphy weave in? This is Showtime folks, which needs, as Russo says candidly, "some funny minority type".

If this is America where "everybody wants to be on TV", whom else does director Tom Dey (Shanghai Noon) toss in? Johnny Cochran (OJ's lawyer) as himself. William Shatner as T.J. Hooker, the TV director looking bloaty, overstuffed and puffy, who only coughs out his lines and twitches his eyebrows. Oprah, Starsky and Hutch and Magnum PI don't even make it to screen, they appear only as part of the vocabulary. And you can blow out the candles you're holding for Larry King who never shows up.

Even with gags upgraded with new twists, like a fork lift doubling up as a getaway vehicle that careens drunkenly through LA streets, swimming pools getting shoot-up from under, and a house being bulleted down to debris, nothing makes you hold your breath. All of it seems lifeless under Dey's hammy direction. Same goes for the characters. Murphy is Murphy even when he's hurling hub caps at thieves. He ditches his Axel F laugh totally, giving us no glimpses of his famous dancing epiglottis. More disappointingly, De Niro isn't De Niro—he swings between being disbelieving and just plain dissed about why he is caught in this kerfuffle. This spoof only sparks intermittently, like when Murphy does a great send-up of the Justice Channel. After that Showtime snuffs out by its ending, a throwback to the Redford-Newman buddy movie, Butch Cassidy and the Sundance Kid. Two cheeseburgers and one Big Gulp with a gun stuck in it aren't enough to make this a big-cheese parody of cop shows or junk food realities.