Show us a sign, the deaf and mute said. The MP cops have obliged. 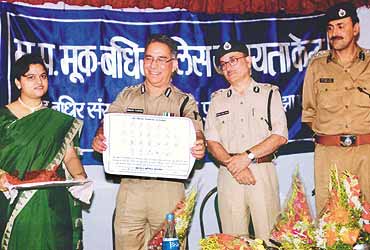 outlookindia.com
-0001-11-30T00:00:00+0553
Ian Stillman, a deaf and mute British national, is charged with possessing brown sugar by the police in Kullu, Himachal Pradesh. During court proceedings, he’s not allowed to use an interpreter to present his defence. Stillman, who runs an NGO called Nambikay Foundation in Kanyakumari, is sentenced to 10 years’ rigorous imprisonment.

A deaf and mute girl, arrested on the charge of being a Naxalite, was raped by a constable while she was being brought back to the remand home at Balaghat (MP) after attending a court hearing at Jabalpur. With great difficulty she finally managed to convey the traumatic experience she had to the head of the remand home. But nothing moved, till the press got wind of the case. After protests and public outrage, the accused was arrested. But questions remain: Will she ever get justice? How did she cope with the trauma?

There are other questions too but it relates to their disability. Do the deaf and mute get adequate opportunities to defend themselves? And do the wheels of justice really move when they tug at them? "The answer, unfortunately, is no," says Gyanendra Purohit of the Indore-based Anand Badhir Sangathan, an organisation dedicated to the deaf and mute.

Frustrated with the state of affairs, and desperately wanting to do something positive to change the status quo, Purohit and his friends lobbied with the police to find ways and means to sensitise law enforcement agencies to the problems faced by those who can neither speak nor hear. Quite a few doors were shut on their face but they were undeterred. One day, a window of hope opened. The police began to see and hear. Some cops and officials reacted with surprising compassion. Now, whenever the deaf and the mute knock, they get a patient hearing and their concerns are addressed.

However, old stereotypes die hard. Initially, the seminars and workshops had but a fleeting impact and attempts to teach the cops the basics of sign language only invited derision. "They made fun of us," says Bobby Khatri, who runs a printing press.

"People often ask that if the deaf and the mute cannot speak or hear, why don’t they use pen and paper to communicate with the world. The answer is that an overwhelming majority—almost 90 per cent of them—are illiterate," says Purohit. Sign language is their only door of perception. And the cops, short on patience and time (even normal, educated people find an encounter with the police a patently unpleasant experience), could hardly be expected to make the extra effort to comprehend what they are saying.

The special police station has so far registered 17 cases, including those of rape. Challans have been filed in four cases. A typical case: the entire property of Mazhar and his wife—both deaf and mute—was cornered by his brother-in-law. With no hope in sight, Mazhar, who’s a resident of Mhow near Indore, even contemplated suicide. Then a friend told him about the special police station. The case was registered and the matter is now in court. Empowerment of the people is a worn-out cliche. But this is one development where the cliche is gradually beginning to describe the reality. To find out more about these thanas, contact: Madhya Pradesh Mook Badhir Police Sahayta Kendra, Police Station Tukoganj, Indore. Ph: 0731-261551