Show Of Hand: Double Or Quits 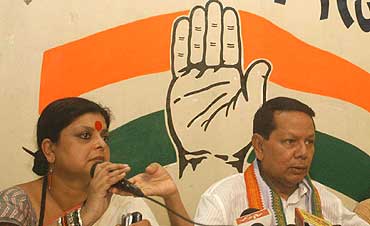 outlookindia.com
-0001-11-30T00:00:00+0553
There are three Congress bastions in north Bengal which have set the alarm bells ringing in the Left. The worry—what if the Congress is able to similarly revive party organisation in other districts, what if it finds a connect with the electorate? Well, then there may be a few surprises in the 2009 Lok Sabha polls.

Behrampore, the Murshidabad district HQ, is like no other town in Bengal. It stands out for cleanliness, orderliness, civic development and low crime rate. But it wasn't like this when the Left was presiding over affairs a decade ago. To say it has metamorphosed in the last decade, under the Congress-run municipality, would be to still underplay the effort. Lal Dighi, a large lake in the town's centre, symbolises the turnaround. Today, it sports fountains, manicured lawns, gardens. And this is true for the entire district—it has witnessed unprecedented development.

The man behind this is Behrampore MP and Congress strongman Adhir Choudhury. He almost single-handed built the Congress organisation in the district. "People want development and when they see a party delivering, they'll support that party," Choudhury told Outlook. He is not too distressed with the fact that the Left wrested the zilla parishad from the Congress by a wafer-thin margin. "There was massive rigging and the administration acted as an adjunct of the CPI(M)," he alleges. Wait till the LS polls—that's his wager.

Further north, in North Dinajpur, the Congress success in wresting the zilla parishad from the Left—for the first time since the district's formation in '92 —is being attributed to the organisational skills of Union minister and Dinajpur MP Priyaranjan Das Munshi and his legislator wife Deepa. Deepa says she's been "very insistent on building up the party machinery. It's the only way to fight an organised party like the CPI(M). We've been successful in carrying out a very effective campaign this time...credit goes to the party workers."

Malda, lying between Murshidabad and North Dinajpur, is also a Congress stronghold, thanks to former stalwart A.B.A. Ghani Khan Choudhury. Choudhury, during his tenures in the Union cabinet under Indira Gandhi, channelled a number of projects to Malda and thus built up strong grassroots support. Now state Congressmen have also come round, realised that is the key to take on the Left. That, plus a united opposition, of course.