The Congress is at a T-junction, and not just in Andhra. The go-it-alone strategy of ’09 takes a backseat. 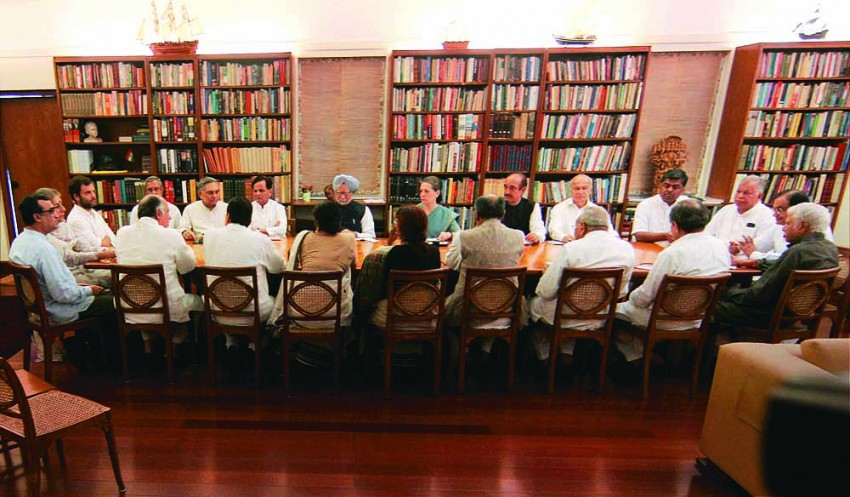 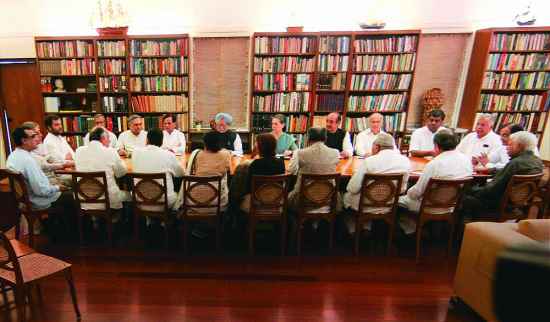 How the Congress is trying to blunt the BJP edge

Reading tea leaves involves a set process: the person searching for answers drinks from a cup of tea, leaving a few drops of the liquid at the bottom. The cup is taken by the ‘reader’ who interprets the meanings of the accidental symbols formed by the soused tea leaves left behind. Rationalists dismiss it as hocus pocus but believers say there is a divine message in the dregs.

It’s hard to come to instant answers in the jumble of politics, geography, sentiment and expediency that defines Tel­an­gana. There are no dregs here, but there is a divided state. What will be left behind may be bushfires that will take a while to burn out. The  T-card has been played by the Congress in a blur of swift moves that should inevitably set in motion events that create the new state of Telangana. Because it is to be carved out of Andhra Pradesh—which gave the ruling party its single largest contingent of MPs in the current Lok Sabha—and also because it has been done in the run-up to a general election, there are political calculations at work although the end results are difficult to divine.

What we can say with certainty is that the Telangana move should be seen as part of the larger Congress strategy of giving primacy to regional players in the game that will now pick up speed till the voting dates in 2014. From being the pre-eminent player in undivided Andhra since 2004, the Congress is now quite reconciled to its imminent decline and is open to pre- and post-election business with the eme­r­ging regional players—the TRS, hopefully, in a pre-election arrangement and the YSR Congress in the post-poll arithmetic. A BJP strategist watching the Congress moves—and planning a Narendra Modi visit to Hyderabad on August 11—says this: “It’s smart timing for the Congress as they’ll soon be in the nothing-to-lose phase. Now they even have a bit to gain.”

The party is now reconciled to its imminent decline in Andhra and is open to any pre- and post-elections business...

Zoom out from the micro picture of Andhra to the country as a whole and another trend becomes clear. The Congress has changed its core strategy from what it followed in 2004 and 2009. Then it believed in going it alone to test the waters. Then it had attempted to rebuild bases in the heartland states where earlier polls had redu­ced it to being a marginal player. From whatever is understood of Rahul Gandhi’s political philosophy, it certainly involved att­empting to keep some distance from the parties that emerged from the churn in the post-Mandal era. Rahul had always believed that the Congress was in competition for ele­ctoral support from the same social segment as these parties.

His “go it alone” strategy seemed to have worked to an extent in the 2009 general election when the Congress managed 22 seats in Uttar Pradesh. Rahul was credited with rebuilding the base but the story collapsed rather quickly as the Con­g­ress virtually became a non-player in Bihar and subsequent assembly and byelection results from UP also reinforced the message that the grand old party was just a bit player in the big state. As a senior leader says, “The 2009 result from Uttar Pradesh was an exception and is unlikely to be repeated. That said, defeat teaches you new ways to stay alive.” 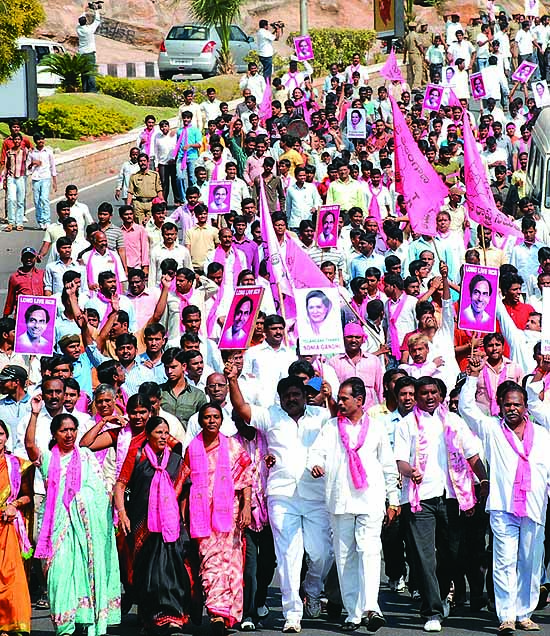 Indeed, ever since the disastrous result in the UP assembly polls last year (when it won only 28 out of 403 seats), the Congress has been rethinking its place in the universe of Indian politics. Greater respect to regional players is already part of the action plan. So before the CWC endorsed Telan­gana, we had the Congress form a government with the jmm in Jharkhand. As general secretary B.K. Hari Prasad says, “It would be foolish in this election to carry on alone when we can build strategic alliances.”

There are certain ironies here. Rahul Gandhi will be the face of the 2014 campaign although there will be no formal declaration of him being the PM candidate. Rahul has spent much of the past decade engaged in organisational work, aimed at first rebuilding the Youth Congress and now revamping the Congress. Yet the fact is that the party is not in good health in most places. Hence an election where he will be the central campaigner may be perceived to be about personalities as the media will inevitably pit him against Modi. But the Congress strategy is quite the reverse of the BJP’s approach for 2014, for now it’s about pragmatism and not personality politics. As a senior leader says, “It is important for us to have a member of the Gandhi family in the front of each campaign. But politics is not about their charisma alone as it was in the time of Indiraji.”

“The 2009 result from UP was an exception, and unlikely to be repeated. But defeat teaches you new ways to stay alive.”

The bottomline is this: the Congress strategists know it is a question of minimising losses and preparing a strategy for an eventuality where the BJP could just be a nose ahead in the race to be the single largest party in 2014. They want to be prepared for what comes after the result is declared in May 2014 (if polls are on schedule). Hence, in 2013 the Congress has no plans to foolishly go it alone in Bihar but is weighing the choice of going with either Nitish Kumar’s JD(U) or Laloo Prasad Yadav’s RJD. Sources in the party say it is a close call, but Sonia Gandhi may eventually settle for Laloo as she is said to have a personal soft corner for him. He also represents one polar position on the secular-non-secular binary that is bound to come into play in an election where Modi will be giving it his all. The Uttar Pradesh strategy is yet to be worked out as the political situation is fluid and although there is talk of the Congress trying to ally with the BSP or SP, it is not clear what the regional powerhouses would want to extract from the national party. While more pre-election alliances should be worked out, the second part of the strategy involves the post-result scenarios.

So it’s not just Andhra Pradesh that stands at a T-junction. The Congress obviously expected to create a storm in the tea cup of the state, and even temporarily resuscitate old demands for small states across India. The party decision-makers believe that when the dust settles at least two players of the region will be in positions where they would have little choice but to make post-election alliances with the Congress.

But it’s not quite as simple. In 1998, the BJP powered by the Atal Behari Vajpayee had 18 per cent of the vote in Andhra Pradesh. In 1999 and 2004, the BJP and TDP struck pre-poll alliances although the latter never formally joined the NDA at the Centre. Since that time, both parties have been in decline in Andhra although the BJP’s stock has fallen more dramatically. The Congress’s, meanwhile, both rose and fell.

Now new players are on the scene. The boundaries are shifting, both literally and metaphorically. One can even argue that no other state has witnessed such dramatic changes in the fate of so many significant political forces. Andhra Pradesh could indeed become the marker for the national chaos and the calculus of impossible arithmetic as we now pick up speed and begin to race towards yet another general election and the campaigns and strategies that precede it.