Should We Legalise Opium?

Does the resurfacing of a 'secular crisis' suggest that we are at the edge of a precipice? Or, should we believe in India's ability to weather all storms? 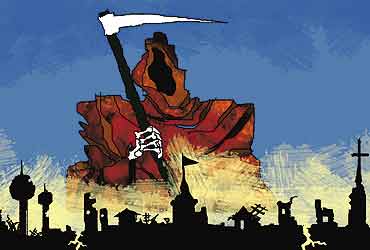 Secularism in India is continually under threat. The razing of the Babri Masjid in Ayodhya led to riots and killings by Hindus and Muslims. The next low point was the massacre of innocent Hindus in Godhra, touching off a larger massacre of equally innocent Muslims in tit-for-tat killings that undermined yet further the amity under which these religious communities had lived in Gujarat in an atmosphere of secularism. We have had unspeakable atrocities against the Sikhs in Delhi after Indira Gandhi’s assassination; and the occasional slaying of proselytising Christian missionaries.

Now, religious strife, albeit of a lower intensity, has broken out over the Danish cartoons by a few impassioned Muslims who are medieval and do not grasp (any more than several Hindus, Christians and Jews from time to time) the principle of free speech and expression that the Western nations generally hold sacred, and are prepared to dispatch you to hell with a fatwa and the sword.

Does this resurfacing of communal strife, disturbing enough though it pales in comparison to the horrendous post-Partition violence in both India and Pakistan, suggest that we are at the edge of a precipice? Or, can we draw comfort from the fact that, just as India’s democracy has survived for over half a century while nearly all other nations liberated from colonialism succumbed to civil strife and often to military takeovers, India will be able to survive the threat to its equally important other pillar of civic virtue, secularism? Perhaps but none of us can afford to be complacent.

Why are Hindus agitated? It is a cliche by now that Hindu revivalism is characterised by the paradox that a sizeable number in the majority community, constituted by Hindus who form 82 per cent of the population, act as if Hindus are a minority. The reactionary, activist fringe among them feels that the Hindus’ rights are set back by the secular state while the rights of the religious minorities, especially Muslims, are advanced. This sense comes from an explosive combination of three elements.
First, the Nehruvian secularists founded their secularism on an equal contempt for all religions. Religion was, in the famous formulation at the time, the opium of the masses. Secularism, as an element of modernity, required a non-discriminatory rejection of all religions and all religiosity from public, as distinct from private, affirmation.

Second, aside from the fact that such an attitude is unrealistic when religion plays an immense role in society, just as it does in the US, it posed a problem for the majority religion. For, while this denial of religiosity could be carried through for the Hindus, it was not possible for the Muslims as another principle intervened: the Muslims were a minority and their religious practices had to be respected and not to be interfered with except in the way, and at the pace, at which the community’s leadership itself defined.

This principle was partly inherited from the colonial times. When Independence came, this situation continued. Each community was left to reform its ways on its own. When it came to Hinduism, the Hindu reformers managed to get changes in objectionable pre-modern practices implemented in legislation such as the Hindu Code Bill. By contrast, the Muslim reformers were less effective. This then appeared to the regressive Hindu elements as a bias by the secular forces in favour of the Muslims and anti-Hindus.

Third, the resulting feeling among the Hindu traditionalists that Hindus were subject to discriminatory treatment, to a kind of "reverse discrimination" if you like, as the asymmetric treatment of the two religions, was further reinforced by a visible affirmative action in favour of the Muslim minority in many ways. Thus, for example, Muslims were noticeably and properly represented deliberately in the cabinet, in the courts and in the bureaucracy.

This constellation of factors, acting in concert to produce the backlash among the anti-modern traditionalist Hindus, induces me to suggest that the correction of one or more of these factors might have produced greater harmony and might have moderated, if not avoided, the recurrent religious strife. It is possible that a Gandhian approach to secularism, based instead on equal respect for all religions in the public sphere, and a more deliberate and decisive attempt early on in the life of our nation to bring non-fundamentalist Hindu and Muslim leadership together to converge on common civil laws, would have helped. But let me add two external reasons, one familiar and the other novel, which have also fuelled the threat to our secularism today.

One is, of course, the fact that Pakistan, ruled for half its life by military dictators who have exiled civilian political leaders and even hanged a former PM, has had an usual vested interest in externalising its domestic problems of governance. Three successive defeats at India’s hands, and the ignominious surrender to the Indian army in East Pakistan, have fuelled the desire for revenge by going after India’s soft spots. These include Kashmir, where the Muslim card is played cynically, and another is India’s Muslims who are treated as pawns in the game of playing up their sentiments as "imagined" victims of the "Hindu state".

While the recent dialogue between General Musharraf and PM Manmohan Singh carries the BJP initiatives of former PM A.B. Vajpayee a step further in the right direction, surely the restoration of democracy in Pakistan is critical to reach an enduring solution to the problems between the two countries and, in its wake, strengthening the amity, and weakening the strife, between Hindus and Muslims in India. There are signs today that the military dictatorship’s Kashmir-baiting, and use of Indian Muslims as pawns, has fewer sympathisers in Pakistan’s population; and democracy will only strengthen the forces for accommodation in the same way that NGOs willing to negotiate a solution to Kashmir, for instance, flourish under democratic conditions in India.

Another external factor—operating on the Hindus—needs to be appreciated. A substantial fraction of the Indian diaspora, especially in the US, too shares the Hindu revivalist sentiments. Why do they get so hot under the collar, to the point of supporting financially and otherwise these revivalist notions? I believe there are two principal reasons, one political-philosophical and capable of heroic correction and the other cultural-sociological.

The former lies in the fact that there is an interesting, partial parallel at the international level with the feeling within India among Hindu anti-modernists. While these Hindus feel that Hinduism is being discriminated against in India and other religions favoured in a discriminatory fashion, a large number of Indians abroad feel the same way about the situation in which Hinduism finds itself internationally. They look around the world and what do they find? Every major religion has nation-states embracing them and playing for them, whether they profess to be secular or a theocracy. Look at Israel; it plays for the Jews. The US is clearly a Christian country, and now a Judeo-Christian country (with the Clintons going to church and George W. Bush professing to be twice-born). The Vatican, the Catholic church, even has status at the UN and receives ambassadors from nations worldwide like no other religious order does. The Muslim states do not merely profess theocracy and embrace Islamic constitutions; they even band together in foreign policy through institutions such as the Arab League. It is natural, thus, for Hindus abroad to ask: who plays for Hinduism? Hinduism has over a billion adherents; but it is almost exclusively in one country, India. They see it embracing secularism since Independence and they get upset. It is what I call, in the spirit of E.H. Carr on the problem of "socialism in one state", the problem of "secularism in one state".

So these Hindus, among whom there are many professionals, object to the secularist demands to treat what they see as benign Hindu cultural forms as malign anti-Hinduism. Therefore, they ask noisily for Hindu prayers at Indian functions; they send their children to Sunday schools like the Jewish Saturday schools to learn Sanskrit, Bharatanatyam and the Gita; and, most provocatively, they send monies to RSS schools where they feel that Hindu religion and culture will be taught.

Compounding the problem of "secularism in one state" is a different issue that afflicts some of the diaspora Indians. Coming from a different culture where the women do not enjoy equality—and this is particularly true of immigrant East African Indians whose isolation from modernity has frozen them at gender attitudes a century behind the curve—they react to the greater freedom and independence of their women folk by voting for Rama Rajya. What they are looking for is Rajya over Sita. This drives them into the arms of the RSS-type fundamentalists among the Hindus.

In focusing on why the diaspora of educated Indians inclines towards Hindutva, I believe that it is the threat to their views on gender roles and the threat to them posed by migration to America that provides the fuel for their support of the RSS, VHP et al from abroad.

But if this link can be explained but not remedied, this is not true of the problem posed by "secularism in one state". To see how this might be remedied, one needs to focus on the fact that the problem arises not from the refusal to allow Hindus freedom to practice their religion but from the fact that the public displays and affirmation of it assign to it a discriminatory and inferior status. We need to consider frontally, therefore, the important question of what we mean by religious freedom, a cornerstone of our fundamental political beliefs. The conventional Western view of religious freedom considers it to be what I might call, borrowing philosophical terminology in the debates on liberty, negative religious freedom: that we permit the free exercise of religion. But, we also need to consider what should be called positive religious freedom: that no religion be favoured in public space, effectively dominating and marginalising other religions.

While theocracies typically elevate the dominant religion to a status that compromises positive religious freedom, there is no excuse for self-described non-theocratic societies to do so. Perhaps that will moderate the sense in the Indian diaspora that Hinduism is suffering from the discrimination resulting from "secularism in one state".

(The author is Professor, Economics and Law, at Columbia University. This essay is an abbreviated version of a paper to be published in a volume on secularism, printed by Oxford University Press [India].)