Kanchan Devi has been in coma since 1999. Her family is pleading for euthanasia, but the court has said no. 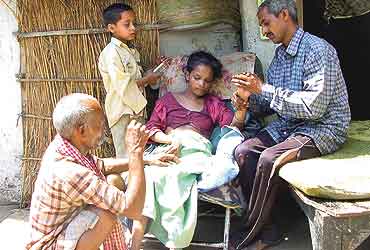 outlookindia.com
-0001-11-30T00:00:00+0553
After a bitter battle over her right to die as a patient in a persistent vegetative state, American Terri Schiavo was allowed to die. But closer home in Bihar, a similar release from a condition no one would envy still eludes Kanchan Devi.

For the past six years, her husband and her parents, along with their lawyers, have sought a merciful death for her in the absence of a cure. "We are watching her dying inch by inch," says her husband Tarkeshwar Chandravanshi. "We want to see her sleep calmly and quietly, once and for all," adds her father Baiju Ram.

The gulf between Schiavo and Kanchan is as wide as the geographical distance between the US and India. While Schiavo received worldwide attention, with many organisations rushing to her aid, and the US Supreme Court, on the petition of her husband, allowing removal of her feeding tube, no one is much worried about this poor backward-caste woman.

When her distraught family moved the court seeking permission for her mercy killing, the petition was rejected. Tarkeshwar is now taking a cue from the US judgement in favour of letting Schiavo die and has written to Bihar Governor Buta Singh seeking permission for euthanasia as his lawyers are preparing to move a revision petition in the high court.

Kanchan Devi's misery began in 1999, when she was taken to a private nursing home for delivery. Her doctors recommended a Caesarean, but in the dead of the night she was wheeled out of the operation theatre, unconscious, and her husband was asked to rush her to the Patna Medical College Hospital (PMCH). There she delivered a baby in the normal way but did not regain full consciousness. The baby died after a few hours and her family took her to another private hospital. But Kanchan Devi, 31, never recovered.

"I sold my ancestral home and land for Rs 65,000, then sold all the jewellery and whatever else I had," says Tarkeshwar who has been unemployed since he lost his job as supervisor in a bulb factory. Her father also sold his property to pay for his daughter's treatment. He now prays for a quick death. But her husband is still in two minds. "I want her to be treated at AIIMS (the All-India Institute of Medical Sciences in Delhi) but for that I need the government's help," Tarkeshwar says. He says he met railway minister Laloo Yadav twice, to no avail. He also sought compensation from the doctors he holds responsible for his wife's state, but was threatened by goons. The nursing home also refused to give him any document relating to her case.

When her parents, husband and in-laws jointly sought an OK for euthanasia at the Patna High Court a few years back, the plea was rejected. "The job of the judge is not to take life" and, "this court is certainly not in a position to, in effect, give an order that this patient should be killed," the judges said. The court added, "The patient was not conscious enough to express a wish to die".

Ebrahim Kabir, counsel for the petitioners, had pleaded that Kanchan has a right to die with dignity under Article 21 of the Constitution that guarantees right to life. The court directed the PMCH to constitute a team of medical experts and provide her treatment. But the medical board expressed helplessness, saying necessary infrastructure was not available in Bihar and she be taken to AIIMS, warning that the treatment would be costly and slow; the family says it doesn't have the means to take Kanchan to Delhi. Despite his battle, Tarkeshwar still shivers at the idea of mercy killing. "I still hope that she could be cured," he says, fondly touching his wife's cheek. She just lies motionless in his lap, eyes wide open.

Meanwhile, In The East