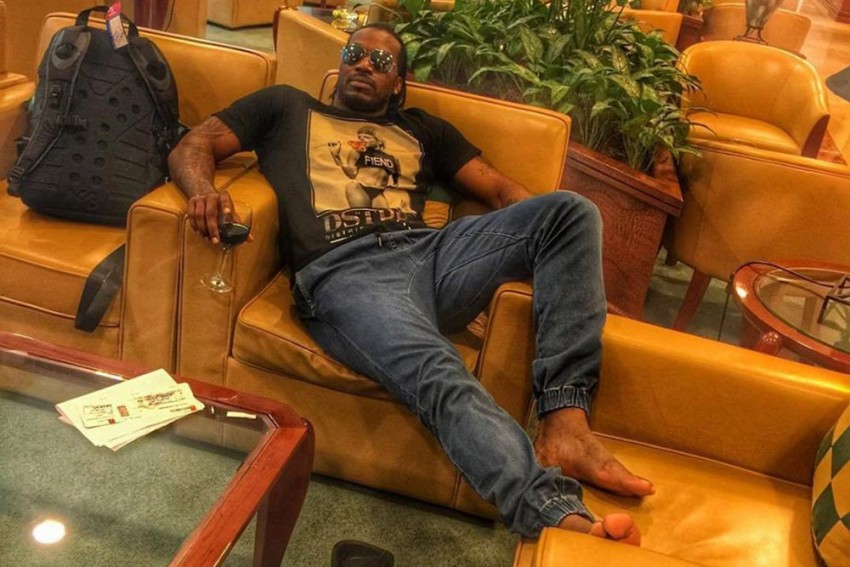 King Of Cool
Gayle lets his hair down, and his feet up, at a hotel lobby. A cricketer’s life is an itinerant, hectic life. Gayle is a past master at living it.
Chris Gayle June 02, 2016 00:00 IST Shot A ’Ennessy, Boss Di Dancefloor 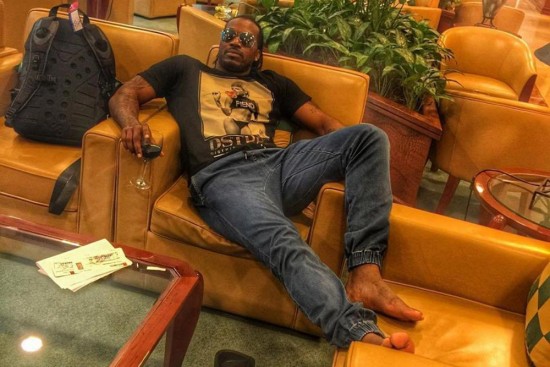 Life changes. Cricket is still the obsession, but it has competition. Playing under-19 cricket for Jamaica, I start opening with a crazy kid from the sticks called Leon Garrick. He is a superstitious boy. The night before a match he insists we go to the movies together, because he believes that if we go to the movies together we make runs together the next day. He also likes to party. We make a good pair, because both of us are shy with girls, have no money to buy clothes and have no money to buy drinks. We can’t even get into the places we want to get into, not least for those reasons, but against logic each of us still acts like a gyalis, a ladies’ man. Playboys in borrowed shirts, playboys in your big brother’s shoes.

And it’s fun. Opening for Jamaica together, runs starting to flow. Getting into the nightclubs whose doors open because of those runs. Easing into the party groove, starting to find girls, starting to convince them that we’re not penniless kids from the country or Rollington Town, but somehow men with the world wanting to welcome them in.

Beenie Man is on the sound systems, singing about the girls and sugar, how he’s a world-class lover, and these girls we see are like sugar, even if we’re not yet the rest of it.

You take back girls to your room. Sometimes you have to say to your roomie, “Hey roomie, need a likkle ‘arf an hour.” And roomie say, “Oh-kay, do yuh ting man.” Sometimes, you can have a difficult room-mate who will never move, and you might just have to improvise. On and on. You’re now partying all the time. Leon is a good wingman, and I’m a good talker. Still shy, but with a couple of shots of Hennessy out comes Flamboyance Gayle. Shot a ‘ennessy, boss di dancefloor.

The way I’ll talk and come across, I’ll be rude and sweet at the same time, and girls seem to just gravitate to it. A woman loves a compliment. They love to hear how good they look. I learned that early. Just spill it out. You see some men thinking exactly as men. It’s not, ‘You want a car, baby?’ Simple likkle tings. Think as a woman. Counsel them. Pay attention to them, and you’re good to go.

In my later days, if a girl throws herself at me, I’m not interested. Too easy, no fun. When you’re young, anything comes, you go. You have so much energy. It’s all new. It’s all an adventure. Enjoyment everywhere you look. 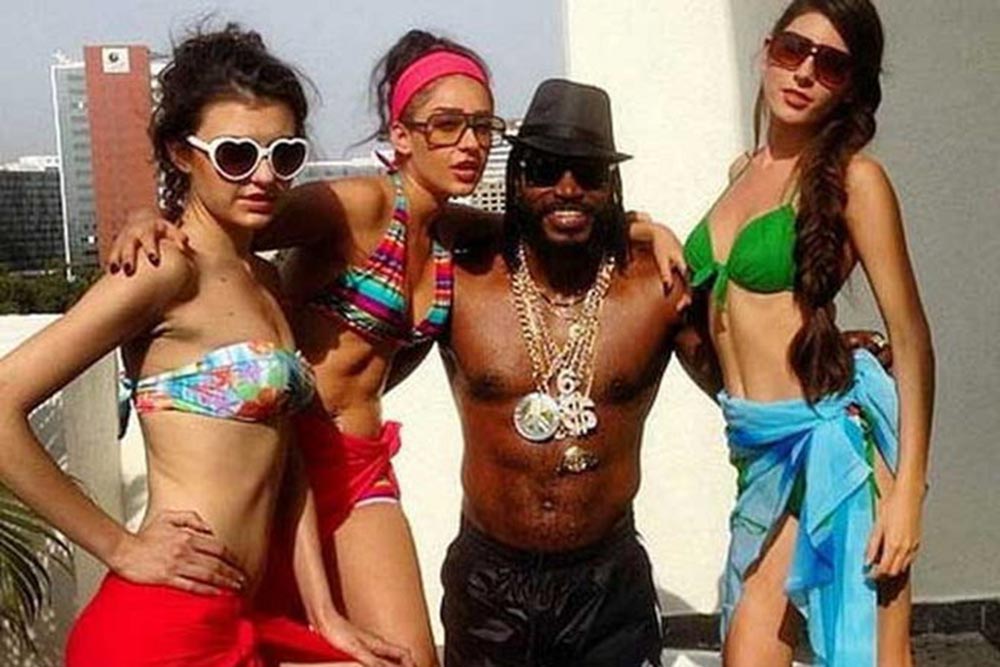 “The way I’ll talk and come across, I’ll be rude and sweet at the same time, and girls seem to just gravitate to it. A woman loves a compliment too.”

My first tour to England comes in 2000. I’m not playing in many games, so I can have some fun. And what a nice experience! I’ll be in the club and buy a bottle of champagne, and the girls will just come over to you. Party animals, in every town from Worcester to Cardiff to Nottingham to Leeds. If they like you, they’re coming for you. If a girl wants you, there’s nothing stopping her from getting you. That’s how it goes.

The port authority back in Kingston pay for me and a few other young talents—Daren Ganga, Jermaine Lawson, Ramnaresh Sarwan—to spend the winter at the Australian Cricket Academy in Henley Beach, Adelaide. The cricket is fantastic—very intense, very well organised. Rod Marsh runs it with a firm hand. With me in the ranks are future Aussie skipper Michael Clarke and his long-time teammates Shane Watson and Nathan Hauritz.

The social life is extraordinary. My first time Down Under, and what an experience. At no point do I go out looking for any woman. They look for me.

I walk into a club and I get my arse pinched. “Whaat! Who did that?” And then you see a girl just wink at you. Me thinking, “Is this for real?” I go to the bar, and the bartender brings my drink before I order one, points to the other end of the bar and says, that lady over there sent it to you. “Whaat? Is this serious?” Andre Richards with me, both of us whistling in shock. “Is this what Australia is like?”

We don’t work it out until later, but it seems a lot of girls in Australia have something for the dark-skinned guy. I’m standing there scratching my head. If you are talking to one girl and she goes to the bathroom, the next one come take her place. They cyaan slip up!

Girls buying you drinks, girls pinching your arse. You feel like you’re playing a game—eeny-meeny-miney-mo. We’re staying in academy accommodation, so you can’t take girls back. Rod’s rules. So you have to go where the girl is going.

They’ll even come pick you up from the academy, which is fine until morning comes, and you don’t know where you are in this new city. Time to hustle. Time to get back quickly. Oversleeping, running into the street whistling as loud as you could. “TAXI!” Me and Jermaine Lawson, waking up in the same house, different bedrooms, different girls, me having to wake him up, him dead to the world.

Sometimes the sun will come up and it will be...aw, man. But it is all such fun. And the girls want to have even more fun than we do.

"India, US Are Looking Over Their Shoulders At Beijing"