Short On The Delivery

When it came to power in May 2009, some ministers in the UPA government had set themselves a deadline of 100 days to show results. But one year and nine-odd months later, the report card of its flagship programmes in nine states hit by Maoism is dismal. Much of the money allocated has gone unspent, according to the “performance study” the Planning Commission conducted in these states and submitted to the government last month. 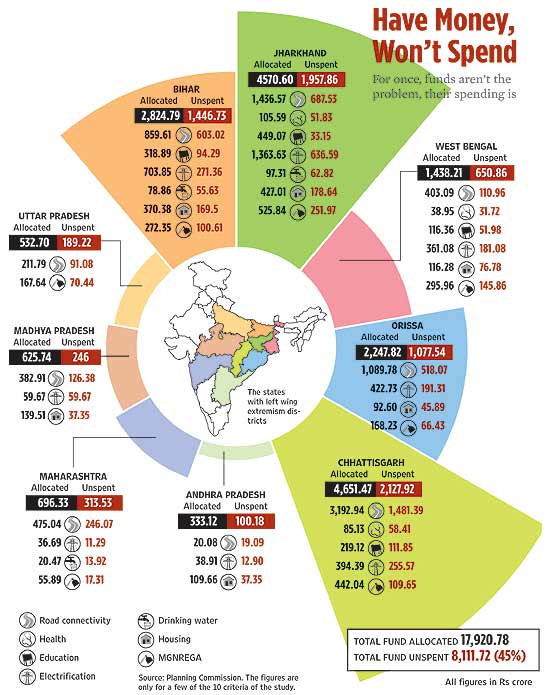 One major hurdle the study found in the implementation of the schemes was political intervention in fund allocation at the village level. Thus, some parts of a village got higher allocation while others were ignored. In most cases, the allocation was being influenced by local MLAs. The study also detected a gap between the village and block levels in the preparation and maintenance of management information systems for the schemes.

Then, lack of vehicles resulted in limitation in the execution and monitoring of schemes. Under MGNREGA, beneficiaries were provided employment for 20-25 days on an average instead of the 100 days envisaged in the scheme. In the case of education schemes, if absenteeism and quality of teaching impeded SSA efforts, schools under the ashram school initiatives were poorly constructed, overcrowded and lacked basic provisions. Besides, skill development in these schools and hostels were found to be the least effective of development schemes.

Dr Moneer Alam of the Institute of Economic Development, a member of the working group of the Planning Commission, says, “The problem lies in the system. In case of education programmes, teachers do not just teach under SSA, they often dabble in other work and make students work too. This is how it works in villages. The level of performance goes down when the people involved in the scheme are not focused.”

Expenditure was also erratic across schemes and states. AP, for instance, spent only Rs 1.5 crore of the Rs 25 crore it was given for the ashram school scheme. Madhya Pradesh did worse: it was allocated 95 lakh for the scheme but spent not a penny! Similarly, while AP got Rs 20.06 crore for road connectivity under the Gram Sadak Yojana, the money spent was a meagre Rs 98.36 lakh.

Not just unspent funds, but the Gram Sadak Yojana is also stymied by slow execution and poor roads in remote villages and in hilly forested areas. “There was a major issue in implementation because of the Forest Rights Act,” explains Sudha Pillai, member secretary, Planning Commission. “For road connectivity, clearance is needed and that blocks the project for long. We are trying to empower district-level officials. The issues in tribal areas have come up because of the non-implementation of the Panchayat Extension to Scheduled Areas Act. We’re looking into all of it. There should be positive changes soon.”

On its part, the study doesn’t stop at identifying problems, it also offers recommendations to improve the performance of schemes. It suggests that people be involved in the decision-making process, a fair bpl list be maintained and the pace of infrastructure development be accelerated. It also advocates improvement in communication infrastructure in rural areas, along with better connectivity to urban centers and major cities.

As Pillai says, “The shortcomings have come to our notice. We have formed an empowered group of officers comprising secretaries of various ministries. They have made several amendments to improve the situation. The empowered group recently met on the issue. We have tried to simplify the system at every step.” If all these good intentions come to pass, the UPA might perhaps have reason to pat itself on the back, after all.