The current churning in Pakistan clearly brings out its very own 'clash of civilisations'—pandered Islamists vs a US-dependent elite. 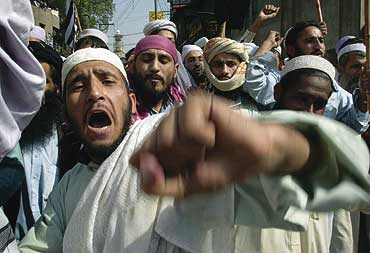 outlookindia.com
-0001-11-30T00:00:00+0553
Pakistan is simmering. And it only takes a religious leader to fan the smouldering embers to suck towns and cities into a vortex of fury—shops and cars are set afire as frenzied people take to streets shouting slogans against the US and President Pervez Musharraf, clashing intermittently with the police. The Pakistan government could well succeed in preventing the fire from spreading, but, for the moment, it's anxious.

The anger against the attack on Afghanistan, and Islamabad's support to Washington, has singed all the four provinces of the country. The worst affected has been Baluchistan's capital Quetta, where marauding mobs set alight a number of buildings, including the offices of UN agencies, banks and cinema halls, and fought pitched battles with the police. The death toll could mount as the US continues to bomb Afghanistan—and set passions aflame here. Karachi, Islamabad, Peshawar and parts of tribal areas, too, witnessed protest marches, albeit less volatile.

Some have taken heart from the fact that the number of people involved in these rallies hasn't assumed mammoth proportions. Yet the mood in the nation is bellicose, reflecting the sharp divide between the middle classes/intelligentsia and a clutch of radical Islamist parties. Pakistan's own 'clash of civilisations' could acquire sinister overtones in the event of heavy civilian casualties in Afghanistan. Observers feel this could dramatically increase the size of rallies—and also further distend the balloon of Musharraf's problems.

Several religious leaders have already issued fatwas asking their followers to wage jehad against the US. Lashkar-e-Toiba chief Prof Hafiz Mohammed Saeed was the first off the block. Describing the attacks on Afghanistan as the beginning of a 'crusade' against the Muslim world, he has asked the believers to enhance their bond with the Creator by praying more, seeking forgiveness for their sins and preparing for jehad. Says Saeed: "It's a time of test for the believer."

Medieval stuff, you'd say, but political nevertheless. Similarly, Jamiat Ulema-e-Pakistan (jup) chief Maulana Shah Ahmed Noorani says that by attacking innocent citizens in Afghanistan, the US has demonstrated its own barbarity. "The Americans have been killing innocent Iraqis for the last 10 years and have now started persecuting Afghans to show its hatred for Islam and Muslims. The US has chosen a path of destruction for itself as Afghanistan will prove to be its graveyard. The attack on Afghanistan should be taken as an attack on Islam and all Muslims should join hands against the anti-Islam forces."

But the Pakistan government isn't listening, nor are several other Muslim regimes. Early last week, Pakistan Awami Tehrik chairman Tahirul Qadri expressed concern at the inordinate delay in convening the Organisation of Islamic Conference (oic) meet at Doha, Qatar. In fact, in Pakistan, as elsewhere in large parts of the Muslim world, the chasm between Islamists and the government is widening.

Adds Ejazul Haq, the elder son of former military dictator Gen Zia-ul-Haq: "No amount of bombing and Cruise missiles will help reduce tension or eliminate terrorism (from the Muslim world) until efforts are made to resolve issues which lead to terrorism. Missiles are not the solution; it would only aggravate the situation."

Religious leaders haven't confined themselves to invoking the Quran or other Islamic symbols. Some have taken to dissecting the Pakistani foreign policy, stoking the anxiety of the masses.For instance, Pakistan's Jamaat-e-Islami chief Qazi Hussain Ahmad says: "Pakistan should immediately distance itself from the US attacks. The whole region has now become a war zone. The decision of Washington to counter violence by violence will surely breed more violence. The current Pakistan policy will lead to its isolation from Afghanistan, Iran, and China."

Such remarks appeal to the people also because of the widespread distrust against Washington. For one, most religious leaders argue that Pakistan shouldn't have supported Washington because of the manner in which successive US governments have ditched Islamabad. They also harp on Washington's refusal to intervene in the Palestine issue, and the 'punishment' still being meted out to Iraq. All these examples render people susceptible to the argument that Washington's goal is neither to destroy the Taliban nor apprehend Osama bin Laden. It is instead aimed at undermining Pakistan's attempts at becoming a power.

How, you'd ask; and why? Qazi Hussain Ahmad has the answer: "Neither bin Laden nor the Taliban are the real targets of the US. It only wants to destroy Pakistan and its nuclear capability, besides curtailing it as an emerging power." There are also fears about India exploiting the situation to launch an attack on Pakistan. In other words, religious fervour has fused with anxieties about the nation's survival and anger against the US, consequently producing a cocktail of passion that could prove incendiary.

Also, Afghanistan symbolised Pakistan's only successful military intervention and that gain, for some, seems to have been blown in less than a month. Pakistan People's Party leader and former interior minister Maj Gen (retd) Naseerullah Baabar says: "It is very unfortunate that a cowardly decision has washed away Pakistan's past 28 years of effort on the Afghan front. The US support to the Northern Alliance has further triggered the chances of Afghanistan's disintegration. Even otherwise, these attacks will cause colossal losses to human lives, already being ravaged by the decades-long war."

For some, especially those in the nwfp, religious and kinship ties with the people of Afghanistan have made even non-Islamist sections lament the devastation of the country. And this lament could well turn into anger. No wonder the Frontier-based National Awami Party Pakistan (napp) Ajmal Khattak argues: "For restoration of lasting peace in the region, a solution must be found according to the traditions and values of Afghan culture.... The neighbouring countries should stop intervening in Afghanistan and let the Afghans decide their future themselves."

But that is not expected to happen until the Taliban is pounded and dislodged from power. For the moment, though, the military government is concerned that large-scale and violent demonstrations do not break out at this extremely critical time. In a pre-emptive move, the authorities have placed the leaders of the more vociferously pro-Taliban parties under house arrest. It has been also decided to repatriate those Afghan refugees who are found participating in the protests against the US air strikes in Afghanistan. "We have received reports that pro-Taliban Afghan refugees are participating in protest demonstrations and have identified several of them for immediate deportation," reveals a senior government official. "For instance, government agencies have reported that a large number of Afghans had joined the protests organised by Maulana Fazlur Rehman-led jui in Baluchistan and the NWFP".

The government also claims that the three persons who died in Baluchistan early last week were Afghan refugees who were trying to block a highway (see 'Swirling, Split Atoms' by Daniel Lak). Says a senior government official: "Under no circumstances would refugees be allowed to take part in protests and disturb peace in Pakistan, which has provided them shelter and is bearing the huge financial burden that this entails. The locals may resort to peaceful protest but foreigners cannot be permitted. Any Afghan refugee who is identified as taking part in the protests would be put in vehicles and dropped inside Afghanistan."

All this could well prove to be a gloss, but most analysts agree that the military regime isn't yet facing a crisis—and could ride the storm. They say most Pakistan religious leaders lack countrywide support and the government could neutralise them through the carrot-and-stick policy, as was done on several occasions in the past.

But then these are still early days and much would depend on how the situation unfolds in Afghanistan. What the Musharraf regime is encountering today is the legacy of Islamist policies that President Gen Zia-ul-Haq pursued in the seventies and the eighties. Not only did this lead to proliferation of religious seminaries in the country, it also led to the 'militarisation' of religious organisations linked to Afghanistan and Kashmir. These have produced thousands of jehadis who might decide to turn their ire against the government.

Their power was amply demonstrated when the US launched missile strikes against bin Laden's Afghan bases in 1998. The Islamic hardliners had then organised massive street protests, and a nervous Nawaz Sharif, then the prime minister, tried to pacify them by pushing through the National Assembly a highly controversial constitutional amendment that made the Sharia law supreme. (It later got stuck in the Senate.)

Others, however, say the army isn't quite like the civilian government and would prefer draconian measures instead of mollycoddling the Islamist. It is also argued that without the support of the army and the isi, these religious organisations have little more than nuisance value.

But what ought not to be forgotten is the demographic situation of Pakistan. With nearly 20 million of the country's 140 million people being Pathans, the ethnic group from which the Taliban draws support, the Musharraf regime could well find itself caught in a cleft-stick.