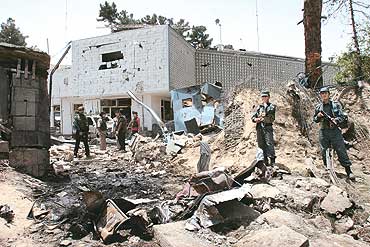 outlookindia.com
-0001-11-30T00:00:00+0553
The last security advisory from the Indian embassy in Kabul came on May 29, following an attack on an international military convoy. It was signed by defence attache Brigadier R.D. Mehta—it's the sort of mundane fact that gathers the force of irony in retrospect. The embassy routinely despatches such advisories after every major incident of violence, cautioning Indians on safety issues. What was not routine was the gap that followed the May 29 note. A diplomat based in Kabul for years told this correspondent, "It's been too quiet. It was about time for another incident."

That anticipated attack occurred on July 7, exploding with a ferocity that hadn't been seen even in Kabul earlier. A suicide bomber with explosives packed in his vehicle rammed into an Indian diplomatic car carrying none other than the defence attache, Brig Mehta, along with political counsellor Venkateswara Rao, just as they were to enter the embassy compound. The impact of the explosion was such that those in the vicinity either got incinerated or were thrown great distances and the ground was left cratered. Only a headcount enabled the embassy initially to narrow down the identity of the probable victims. Besides the brigadier, Rao and their driver, two itbp guards and 41 Afghans were killed and 141 wounded.

Suicide bombings, explosions, firefights and kidnappings are frequent occurrences even in Kabul. Though the bulk of the fighting between the insurgents and pro-government forces (including the international military) is confined to southern Afghanistan, the escalating conflict has spread instability countrywide. In fact, 2007 was the most violent year in terms of casualties and the first six months of 2008 (excluding the deaths in the last fortnight) have already seen the death of 698 civilians. Insecurity has restricted international agencies and NGOs from delivering humanitarian and development aid, particularly to those areas in dire need of help. Apart from anti-government insurgents, the climate of violence and the government's limited capacity to provide security have allowed criminals to operate with impunity.

The Afghan government was quick to analyse the Monday bombing as the work of a "regional intelligence agency", stopping short of publicly naming Pakistan or the isi only because of the difficulties of obtaining conclusive proof. The Taliban, who usually own up to their spectacular strikes, disclaimed any responsibility, lending credence to this claim. The president's spokesperson, Humayun Hamidzada, said the "specifications" of the attack, including the "materials" and the "timing", made it clear that it was the work of a "particular intelligence agency which has conducted such attacks in Afghanistan in the past". He said the name of the agency was obvious. A senior Afghan government official said intelligence intercepts hinting at an attack on the Indian embassy, which was passed on to the embassy earlier, corroborated the charges.

Yet Afghanistan's propensity to blame Pakistan for all violence must be taken into consideration in any evaluation of the origins of the Monday attack. Blaming Pakistan helps discount the depth of public alienation with the government and implicitly absolves it of all responsibility. Refusing to "speculate" on the identity of the perpetrators of the July 7 attack, Indian ambassador to Afghanistan Jayant Prasad however said, "The statements of the Afghan leadership should be taken at face value."

The Indian response to the attack has not been to hunker down and barricade itself, as is the case with most foreign missions and international agencies working here, but to pick up the pieces and move forward. Prasad told this correspondent, "This will not deter us from our commitment to the social and economic development of this country". He also pointed out that the Indian engagement here has been different from that of other missions, with a much greater public interface with locals that carried with it a certain risk.

Officials apart, other Indians too have extensive interaction locally. The cultural similarities and exceptional warmth towards India ensures that many Indians here find their national identity is to their advantage, as has Saurabh Naithani. He said, "Personally, I don't feel threatened but frustrated that after all the security advisories and plans, they seem to have the power to strike at will." Naithani, who has been in this country for over two years, working most recently with the Afghan government, is critical of the local security which places emphasis on "a physical show of force and is reactive rather than proactive".

The embassy, he feels, was targeted not so much because it was Indian but because it has become high-profile on account of India emerging as the sixth largest bilateral donor. Indian aid to Afghanistan currently stands at $844 million (committed). Agrees Mudasser Hussain Siddiqui, a senior staffer of ActionAid Afghanistan, "India is becoming a big visible player and the embassy provided a soft target." Mudasser, who has lived here for over three years, feels no more threatened than before. "I still see a lot of respect and affection from the people of Afghanistan. In fact, most people who condoled the loss were disbelieving. They asked: 'How could this happen to India?'"