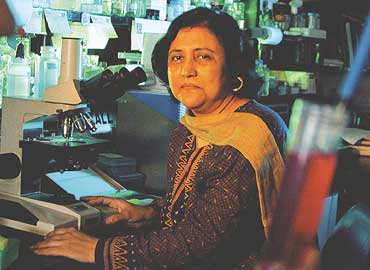 outlookindia.com
-0001-11-30T00:00:00+0553
Malaria is one of India’s biggest problems, and Shobhona Sharma’s work at the Tata Institute for Fundamental Research, Mumbai, has dramatically enhanced our understanding of the malarial parasite. Sharma’s group is focusing on identifying the antibodies that exist in certain adults who develop a natural immunity to malaria after catching the infection roughly 10 times, and thereby finding a vaccine. These antibodies ensure the amount of malarial parasite in an immune adult is maintained at a level where the person shows no visible symptoms.

But target antigens of the parasite either keep changing form or are highly conserved proteins, which implies that high levels of antibodies raised through vaccination may cause harm as auto-antibodies.Also, natural immunity hinges on the body’s ability to maintain parasites at a level just enough to fend off disease. Mimicking such a situation has been hard. Recently, using optical tweezers to trap malaria-infected red blood cells (RBC), Sharma found that the doughnut-shaped cells folded up and rotated rapidly, unlike normal RBCs. The infection causes a change in the cell membrane that slows RBC movement, allowing it to clog up with normal RBCs and capillary cells and blocking the capillaries—an important reason why falciparum malaria progresses to the deadly cerebral malaria. The vaccine is still a challenge, but Sharma’s work could one day script victory in the war on malaria.