Sania knows that I am innocent as a lamb and had nothing to do with any other girl from Hyderabad. 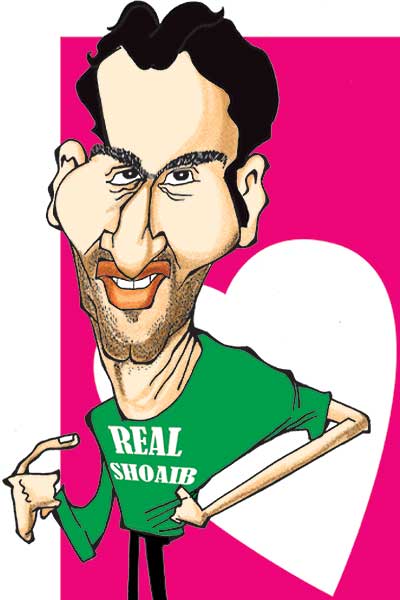 I know there are many in India and Pakistan who wonder why Sania trusts me despite all those allegations by a certain Ayesha Siddiqui. Well, that’s because she knows Shoaib’s real story—a story which I will now share with you. Let me begin at the beginning. You all know that old Pakistani saying—that every human has at least six lookalikes. Luckily, in my case, all of them happen to live in my home town, Sialkot. And, in what must be the strangest of coincidences, all of them have been named Shoaib Malik and love cricket. They have also been blessed with the same voice as mine and have parents who bear a strong resemblance to my abba and ammi. In fact, Sania has seen the Sialkot sextet and therefore knows that I am innocent as a lamb and had nothing to do with any other girl from Hyderabad.

So the Shoaib (let’s call him No. 4 for identification purposes) who secretly married Ayesha in 2002 and exchanged vows over the telephone was not me. Now, I’ve done some background checks on this particular lookalike. Apparently, No. 4 is a strange guy whose pastime in life is to call Indian kudis on the phone and marry them. I know of six Hyderabad girls who have been thus tricked by him. In fact, when last heard of, he was toying with the possibility of shaadi and talaq over SMS. So my sincere advice to all my Indian sisters is: beware of this Shoaib Malik. And yes, before I forget, No. 4 did tag along with the Pakistan team when they were hosted at the Siddiqui residence. Only Rashid Latif (who was also present) could identify him as the nakli Shoaib. Reason: he knew that I don’t have a birthmark on the right side of my neck. Incidentally, I gave the party a skip since No. 4 was anyway attending. Instead, I read a book on tennis and another on badminton since a palmist in Sialkot had predicted that I would marry a lady with several racquets to her credit.

Meanwhile, to cut to the latest controversy, I feel I did do something very smart. Unknown to the Siddiquis and to the media, I flew in No. 4 to Hyderabad. His mission: call Ayesha and say talaq thrice. Later, he would announce to the press that the marriage is over. That’s how I killed two kabootars with one stone. The Siddiquis are satisfied that their daughter has been finally divorced. And I am free to marry Sania. By the way, while all this tamasha was on, I was at Nampally railway station disguised as a porter.

Meanwhile, you may wish to know what the other five Shoaibs are all about. Well, one runs a marriage bureau (Amore ki Asha) near Murray College. The other four work for the ISI and are known for fishing in troubled waters (Mangla Lake, Sialkot) and flying kites to distract pilots. And finally, one last word from Sania and me: we are lucky to have survived the Banjara Triangle. The funny thing is, it’s all thanks to Shoaib Malik....