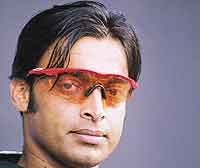 Inzamam says you faked injury at Rawalpindi.
Why would I do such a thing? I'm a team man.

Then why would Inzamam make an issue out of your behaviour?
Inzi is probably disappointed at losing the series.

But Inzamam says when you batted you didn't seem to have an injury?
Batting and bowling put different kinds of strain on the body. I'm surprised how someone can think that I was not injured.

You had differences with him on field placements as well.
I have my own ideas and sometimes others may not agree with that. But there was no real disagreement.

Is someone gunning for the skipper?
Not that I know of. As for me, I have no differences with him.

Your returns against the Indians are not exactly flattering.
That is because of poor form and wickets. It has nothing to do with lack of effort.

Isn't just seven wickets at 42 apiece too few for a bowler of your stature?
I'm really disappointed at that, even more so that we lost the series. But one man does not win or lose a series, the whole team needs to take responsibility.

What are the other reasons for the failure?
I wouldn't want to comment. I suppose our fielding and batting too let us down.

Does your inability to change the course of a game rankle you?
I have done it quite a few times. I'm really sorry I couldn't do it against India.

To what would you attribute your bad image and the discipline issues?
I try to do my best but I'm no angel.