The CM gives notice to land-grabbers 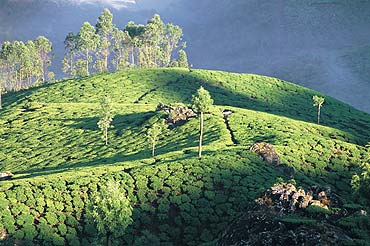 outlookindia.com
-0001-11-30T00:00:00+05:53
Demolition man is not a moniker that sits well with Kerala's otherwise low-profile chief minister, V.S. Achuthanandan. But riding roughshod over criticism from detractors in his own Left Front, the CM has set out on a virtual one-man crusade to reclaim public land from encroachers big and small. The rumble of earthmovers was first heard in the misty Munnar hills, 6,000 feet above sea level. The STF headed by the CM's blue-eyed official, K. Suresh Kumar, set the ball rolling last fortnight, razing 20 out of some 200-odd illegal structures in the hill station.

For the first two weeks, even the courts refused to entertain pleas to stay the demolitions. There was even a dearth of earthmovers as revenue officials in several districts put in requisitions. As news of the drive spread, violators began to voluntarily pull down illegal structures across Kerala. In Kochi, collector A.P.M. Mohammed Haneesh invoked provisions of the Land Conservancy and Highway Protection Acts to bulldoze illegal structures on the main MG Road that runs through the heart of the city. The scenes were the same in the northern district of Kozhikode and down south in Alappuzha where authorities have notified the powerful Muthoot group against setting up a mega project in collaboration with a Korean firm on public land.

"We've been given a mandate by the state to take back all alienated public land, no matter who has encroached on it. Many will think it's been done in haste but the fact is there has been a meticulous phase of identifying and planning before the operation was launched," Suresh Kumar told Outlook. 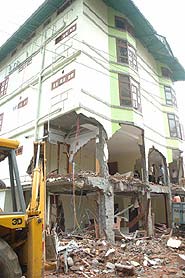 The first report on massive encroachments was filed by former intelligence chief Rajan Medhekar during the previous Congress government. The Medhekar report detailed as many as 3,000 instances of violations, including a resort diverting the course of a stream! Achuthanandan has made it clear the demolition is not just a single swat at land-grabbers: "It's a movement to reclaim our land, water, rivers and shores from encroachers," he proclaimed in Palakkad.

Meanwhile, ugly rubble, mangled steel and debris meets the eye in Munnar and across Kerala where the bulldozers have moved in. "Whatever material remains after the operation will be used to build houses for the poor," explains the CM. Tourism minister Kodiyeri Balakrishnan chips in: "We'll have a blueprint for a new Munnar."

Meanwhile, the Chamber of Commerce and Industry in Kochi is, naturally, up in arms. It feels the government has denied tenant shopkeepers and other businessmen the opportunity to be heard before their buildings were razed. An issue C.S. Ajith Prakash, activist and lawyer, raises too: "This might lead to prolonged litigation and could counter the government's intent of sending out a stern message against land-grabbing."

Whether VS can pursue the drive to its conclusion remains to be seen. For there is considerable bad blood in the CPI(M) over the action. Arch rival and party state secretary Pinarayi Vijayan is seething at the "media syndicate" (his classification of unfriendly scribes) for making Achuthanandan a hero. The subtext of the demolitions is perhaps that the CM wanted to perform some heroic act to stay afloat, and endear himself to the masses and the average CPI(M) worker. There may be some truth in that too, but by all accounts, the move has popular approval.