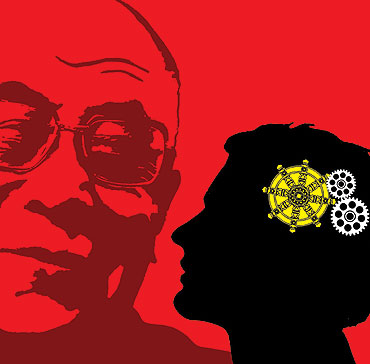 outlookindia.com
-0001-11-30T00:00:00+0553
At a conclave in early March, the Dalai Lama said he was a "shishya" or disciple of India. He metaphorically explained that the Himalayan snow became pristine white only when light came from India. I recall in 1986 the Dalai Lama asking then president Zail Singh whether, if invited to visit China without permission to visit Tibet, should he go at all. The president thought he should. In post-perestroika Soviet Union, he explained, church attendance was up and the state sanctioned the millennium celebration of the Russian Orthodox Church. Why wouldn't the same happen in China, with increased economic liberalisation reviving interest in Buddhism all over China? The Dalai Lama, visibly touched, took a deep breath and remained silent. Though China hasn't exactly gone spiritual, its prosperity still keeps Zail Singh's hope alive.

The Indian approach to the Dalai Lama from 1959 and to Tibet from 1947 has been ambivalent. The Nehruvian assessment of China was laced with romanticism—a nation rising to complement the Asian renaissance, albeit wedded to Communist ideology. In retrospect, India should have resolved its dilemmas as soon as the Chinese intentions became evident with the 1950 invasion of Tibet. The geopolitical balance had shifted with the British withdrawal; the Indian state simply didn't possess the British Empire's coercive powers. While India couldn't have militarily stopped the Chinese invasion, it could have taken strong exception to it and used its existing rights in Tibet to settle its boundary issue (which was between India and Tibet in any case).

Today, 50 years later, the geopolitical tilt is in China's favour. It has hardened its position on the border issue (it no longer talks of a package deal and 'existing actualities'); a Communist party in India indirectly supports it by condemning India-US engagement and now has taken to espousing the denuclearisation of South Asia (which would leave China as the predominant nuclear weapon state in Asia); and it has lulled Indian public opinion into considering it as a benign power even as it cold-bloodedly bolsters Pakistan's nuclear and military capabilities. China has also exploited Indian business greed for greater profit margins even at the risk of bringing Chinese labour and capital into sensitive sectors. It also counters India's moves of seeking a permanent seat in the UN Security Council.

Meanwhile, China waits for the 14th Dalai Lama to die. His life symbolises the reality of the competing value systems of India and China. While China only fitfully controlled the body politic of Tibet, Indian metaphysics was embraced by the Tibetan soul. In hosting the Dalai Lama, we honour our own Buddhist past. While Buddhism got decimated under Hindu reformation and the Islamic onslaught, it was kept safe in Tibetan monasteries. In 792 AD, the great Tibetan king, Trisong Detsen, called for a resolution of conflicting Indian and Chinese Buddhist discourses at the Samye monastery. The Indian master Kamalasila won the two-year debate, ensuring pre-eminence for Indian Buddhism, propagating that enlightenment flowed from attaining a deeper understanding of suffering and the impermanence of the human condition.

Till the end of the 18th century, China and India contributed half of the world's GDP. China dominated goods and services sectors; India excelled at philosophy and spiritualism. A China that can't come to terms with the Dalai Lama would be a China careening without a spiritual anchor into a materialistic, mechanistic future, forever fearful that its people may reject the Faustian bargain and demand accountability and freedom from the authoritarian regime.

India has to stop treating the Dalai Lama like an indigent relative. When was the last time we saw him call on the president or the prime minister? The Dalai Lama in any case commands a global constituency now. While it isn't in his or India's interest to be seen as openly colluding, it's his relevance as a moral force that needs to be amplified through public fora in India on issues of democracy, human rights and rising inter-faith friction. There should be frequent and visible contact with him at the political level, albeit in contexts that can be cultural, religious or global. Ultimately, what will offset China's military and economic edge over India's is the moral authority of a billion people in open compact, despite the cacophony of debates, responding to new challenges through inherited values of tolerance, compassion and faith. The Dalai Lama is a living symbol of this holistic value system, thus striking fear in authoritarian China.

Sound Of Boots On A Starry Sky