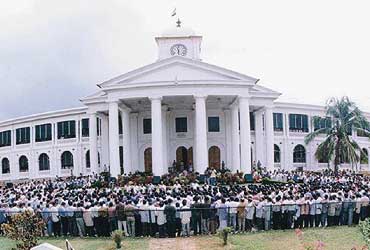 outlookindia.com
-0001-11-30T00:00:00+0553
The RBI directing the Kerala government last week to shut down its treasury after the state exceeded its overdraft limits is a sign of the financial crisis the A.K. Antony government is facing. The directive comes in the backdrop of the indefinite strike from February 6 by 5.5 lakh state government employees protesting against cost-cutting measures announced by the government. The strike has put Kerala on virtual hold and thrown civic facilities completely out of gear. The protests have, for the first time in the state, pitted the common citizenry against those striking work.

Indeed, there is very little sympathy for those protesting fiscal tightening measures announced by chief minister Antony. No downsizing was threatened but the CM said salaries to government staff for the next two months would be paid on the 15th of the month and leave surrender privileges would be cancelled. But the response from the employees—widely seen as a privileged and pampered lot in a state with high levels of unemployment—was a boycott of work which is invoking much public ire.

The indefinite strike has thrown normal life out of gear. Even services like garbage removal and civil supplies are crippled. Trade unions of both the Opposition and the ruling parties are participating in the strike. As a result, the state secretariat and collectorates are deserted. Government and government-aided schools are teacherless.

The strike is in fact cleaving the people into the employees and the common man. And the common man resents the privileged few imposing their will on him. Like closing schools and preventing students on the brink of the sslc examinations from attending classes. There are 5,95,287 students appearing for the board examination this year and angst-ridden parents fear their wards may suffer because schools are non-functional. Members of various parent-teacher associations are holding classes for the students outside the classrooms, defying the strikers in many parts of Kerala. Even a post-graduate police sub-inspector, called to protect willing teachers, stepped into a classroom to teach. The education ministry has said the sslc examinations might have to be postponed if the strike continues.

The strike has also affected business in the state but businessmen are standing by the government, infuriating the agitators. Businessmen are remitting their sales tax directly to banks and cooperating with the government. Even the church has come out in support of the government, denouncing the strike. "People should learn to share not only riches but also poverty," said Cardinal Varkey Vithayathil through a parish letter.

What provoked the passivist Antony to declare curbs on spending? Clarifying the government stand, Antony had this to say: "This government inherited a public debt of Rs 24,000 crore, with unpaid dues of Rs 6,000 crore. Only salaries were being paid, denying even pensions to poor widows. The housing dreams of the poor have been sabotaged." The chief minister also pointed out that the salary bill had doubled to Rs 4,508 crore in 2001 from Rs 2,230 crore in 1995-96—a direct result of votebank politics resulting in a doubling of staff strength. "The privilege of leave surrender had relevance when there was shortage of staff," Antony explained. Obviously, fiscal prudence was hitherto a casualty to populism. As admitted by former chief minister E.K. Nayanar: "I paid more salaries to them when they went on strike during my time."

Antony's call to government employees to make some sacrifices is in another context as well—the fast deteriorating plight of farmers, fishermen and every other unorganised sector, attributed to globalisation. The prices of rubber, tea, coffee, arecanut, coconut, paddy and pepper have collapsed.Farmers are beginning to resort to suicide in Kerala. None of these home truths are sinking home to the organised sector, determined to extract its pound of flesh at any cost.

The government has now imposed the Essential Services Maintenance Act (esma), bringing even under-secretaries into its ambit, and declaring 23 services essential, including zoos, hospitals and veterinary services.

Though the government has begun a slow crackdown using esma, and arresting some leaders, the strike has been total. The trade unions have said that they are willing to talk to the government but Antony insists that the strike has to be called off before any talks. He has also made it clear that there is no going back on the cost-cutting measures announced by him. "Does the government exist just to pay salaries to government staff? Do employees constitute the masses? Don't the people matter?" he asks in anguish. Many in Kerala would agree. As much as 70 per cent of the state revenue is used for paying salaries. Leaving 30 per cent for the huge majority of the others.

'We Have Managed Both The Boom And The Bust'