What is true of Godhra, should be true for India and also for Japan, 'Narubhai’, as I like to call him, said... 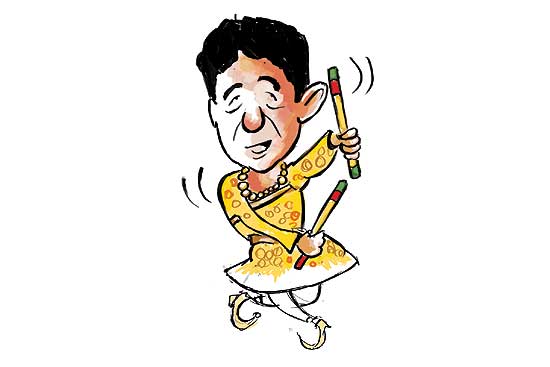 Khem Chho! I am helpless. Spent almost the entire weekend with Narubhai and it has rubbed off on me. I warned my protocol staff not to repeat such mistakes. There can be too much of NaMo or ‘Narubhai’ as I like to call him. With too much of time on our hands and very few things in common, ‘time pass’ was difficult. Barack called me from Washington to inquire how I reacted to the NaMo onslaught. Wanted some tips on how to handle the situation. Very soon, NaMo will be in Washington to talk about ‘Development’. Barack is nervous. NaMo talks in Hindi-Gujarati, the interpreter translates into Gujju English, some American bloke translates this into American English, Obama replies in Yankee English which is then translated to Gujarati-Hindi. Ask me, I endured this the entire weekend.

Our India desk had me believe that NaMo’s got no sense of humour. Not correct, though it was a punishment for us to be together for hours on end. We visited the Toji Temple and viewed the Buddha statue with the attached lotus. Trying to enligh­ten our honorable visitor, I expl­ained the significance of the lotus flower. He kept quiet and told me he could say a thing or two about the lotus which was his party symbol. We had a good laugh, his louder than mine! Unlike the general impression associated with Indian politicians, NaMo does not speak much. When his embassy officials requested him to speak “Do shabd (two words)” he just said, “Sukhi raho” and moved ahead. One girl asked NaMo, “Sukhi as in Godhra?”...but he kept on walking..

He has an eye for history. In the countryside, I showed him some lava emissions and immediately it struck a chord in him. “We have these in Gujarat too minus the volcanoes. But we have learnt to control them.” In fact, I was not even aware of the volcano emissions though everyone else was blabbering about them. He was aware of some of our pre- and post-World War II problems.  Lowering his voice he whispered, “Abe bhai, I know some of your neighbours wanted Japan to apologise for what your army did to the Chinese and the Koreans, the mass rapes and so on. You see, in Gujarat there was a lot of loose talk about Godhra killings. Citizens, activists and even court judgements asked me to apologise for some so-called atrocities but I refused. And my people are voting me back to power time and time again. What is true of Godhra, should be true for India and also for Japan. You just try it and see for yourselves in your next election.”