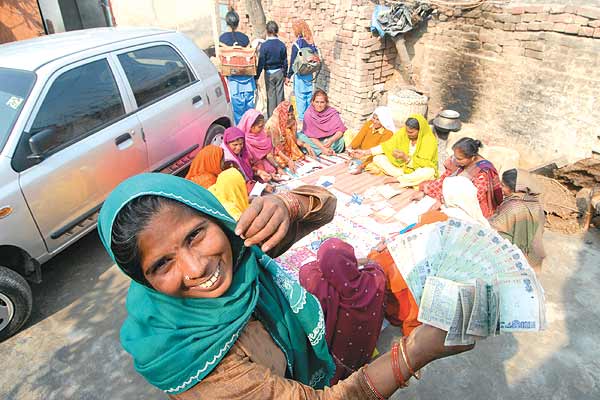 Taravanti clearly remembers the time, 19 years ago, when she got married and came to Kutel Gamrhi, a poverty-stricken village of landless labourers in Haryana’s Karnal district. Earning even Rs 10 a day was difficult. Malnutrition was widespread: newborns would weigh as low as 1.5 kg and would often die in infancy. Women’s health was never a priority there, just as it never was in even the better-off villages of the state.

But things have changed for the better in Kutel Gamrhi since self-help groups (SHGS) for women were created in 2002. The groups were meant to give women the opportunity to earn, provide them with information on nutrition, hygiene, pre- and post-natal care and family planning. Today, the movement has grown to 250 SHGS in the district, involving some 3,000 women from 65 villages. Through the groups, women have been able to take loans of up to Rs 75,000, both from microcredit schemes and from the groups’ own internal lending mechanisms. Together, the groups have a corpus of Rs 3 crore, which they are using to tackle infant and maternal mortality in as direct a way as possible. Money is lent to poor households with pregnant women for spending on nutritive food, check-ups and medicines, which is closely monitored.

The efforts are paying off. Most women now go for ante- and postnatal check-ups. Institutional deliveries have risen by 20 per cent and anaemia in pregnant women has fallen 30 per cent. Last week, a baby weighing a robust 3.8 kg was born, a first for Kutel Gamrhi.

All this has been accompanied by other significant changes. Taravanti’s family, for instance, now earns Rs 25,000 monthly. Her first step, in 2002, was to save Rs 10 every month in an SHG. She then learnt embroidery and began saving more. With SHG loans, she bought a buffalo for the home and a camera for her husband, who started taking marriage photos and now has a small studio. Six loans on, the family has a bike, a car, a milk collection centre, and 17 acres of land on contract, where it grows wheat. The family also cultivates mushrooms on the terrace of the house.

“Women and children don’t die in this village anymore,” says Taravanti with evident pride. “No girl is allowed to marry before she’s 18. And the birth of a girl is no longer mourned here.”

There are other success stories. Shiksha, 35, used an SHG loan to open a medical store for her husband and a bangle-making workshop at home. With the earnings, she is able to send her children to private schools. The family lives in a pucca house. “We give our children things we never had,” she says.

Ish Bhatnagar, a project coordinator with the NGO Arpana Rural Service, says, “Now, the women no longer need to borrow from banks. They get loans at much lower rates of interest from their own savings. We are trying to bring at least a 100 villages under this scheme.” He also takes pains to point out that although his NGO helped in motivating the women, it’s the women themselves who are driving the SHGS and taking it across many more villages.