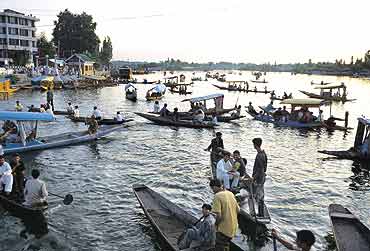 outlookindia.com
-0001-11-30T00:00:00+0553
You sense there's something in the air as soon as you board the Srinagar-bound plane. It's full and most travellers look like tourists, and non-Kashmiris. When you land, Srinagar airport is packed with people—and not just the usual security. The first thing your taxi driver, Abdul Rashid, tells you is "this is the best year for tourism in the last 14 years". As you meander towards your hotel through security barricades, he tells you anecdotes about packed hotels and the general economic boom.

You think it's a bit exaggerated until you go to the city's Boulevard Road (by the Dal Lake) in the evening where traffic jams are a common sight. Thanks to the crowd that also throngs the lake and the adjoining Mughal gardens, sometimes it could take you three to four hours to drive down the 12-km stretch from Nishat Bagh to the main city. Over the next few days, you meet the ruling party politicians who feel that the new CM, Mufti Mohammed Sayeed, has turned around the economic fortunes of the state. And state intelligence and police officials contend that even the militants have struck a deal with local supporters not to attack the tourist spots.

The situation is not too different in other tourist spots like Pahalgam, which is overcrowded with visitors who find it impossible to get accommodation as all rooms and huts have been booked in advance. But, despite these difficulties, the travellers love the place. "It's a paradise on earth. We have come to Kashmir after 25 years," says Niranjan Kumar from Ahmedabad. Gulshan from Amritsar admits things seem normal from a security viewpoint. And Sonia from Ludhiana feels "one must visit Pahalgam at least once in a lifetime".

Now for the facts. Between January 1 and June 16 this year, over 50,000 tourists have visited Kashmir, most of them Indians. Although foreigners are still few and far between, a large number of the 1.5 lakh Amarnath yatris, who will visit the state this month, are likely to travel to the tourist spots in the valley. By end of season, the inflow could be around 2.5 lakh or higher, says an official of the state's tourism department.

These are impressive numbers and could be the highest since 1989, when over 5.5 lakh tourists arrived in J&K. So what's changed from 2002, when a mere 27,000 travellers visited the Valley? Well, there was a political change when the pdp came to power. The new CM decided one of his main tasks was to revive tourism. "The Mufti successfully communicated that the state was a safe place by holding high-profile political events that were seen by TV viewers all over India," says Sadiq Ali, a senior pdp leader. These included the PM's visit and the meeting of Congress CMs.

To get tour operators excited about Kashmir, the CM personally came to Delhi and met them. He tried to convince them to visit Srinagar to understand how there was huge long-untapped potential. The operators interacted with houseboat owners and others. The state authorities single-mindedly focused on the motto that "Kashmir is safe". It turned out to be such an emotional experience that, as one of them who visited Srinagar puts it, "All of us vowed that selling Kashmir to tourists should become our first priority."

Obviously, the next step was to do something to titillate the tourists. The authorities lifted the ban imposed by the NC regime on Amarnath yatris going to Pahalgam. "This encouraged more people to visit the place," feels Amarjeet Singh, owner of a departmental store in Pahalgam. For the first time in 12 years, the famous Cheshmashahi (Royal Spring) resort was opened to the public. "My 10-year-old son has seen it for the first time. Mufti sahib deserves praise for lifting the ban," says Aisha Lone, a housewife.

Everyone knew it was very easy to spoil this party.After all, it would have taken just one fidayeen attack to kill scores of people enjoying the Dal Lake view. But the militants kept relatively quiet. "I think a strong message has gone out from the locals that there's money to be made for the first time in years and, hence, peace should reign during the season—at least at the tourist spots," says an intelligence officer. Adds K. Rajeendran, IGP (Kashmir), "Most of the militant activity is now concentrated in either the rural areas or the hills."

Other police officials reveal that militants have become focused in their approach. "They are mostly targeting local informers, and the security forces, including the police," says one of them. He then cites how, in the past month or so, a dozen police officials have been attacked in one region. "The militants' intelligence seems good since all of them were taken on when their security was lax," he adds. "Just today, one of my men decided to visit his village in Tral area with his wife. He neither carried a weapon nor took any security. He was duly attacked but escaped, although his wife was injured."

It's not that civilians are not getting killed. But the number of attacks on the security forces—be it the army, bsf or police—has gone up. At the same time, given the overall global mindset against terrorism, the Indian forces have decided to take the militants head-on. Therefore, it's only logical that direct confrontations between the two would increase. Recent operations like Sarp Vinash are an indicator of the aggressive mood within the army to flush out militants from the valley, now that there's some global support for it.

However, the change in militants' tactics can also be explained by two developments, both of which have forced them to adopt a wait-and-watch attitude and to opt for targeted attacks. The first is the changing atmosphere as both India and Pakistan prepare grounds for peace talks. "The anti-India organisations in both Kashmir and Pakistan are waiting to see how things shape up in the near future before deciding their course of action," says an intelligence source.

The second is the moves made by Pakistan president Pervez Musharraf to curb militants based in his country. Musharraf had given a commitment to shut down all training camps based in PoK that are sending militants into Kashmir. However, the Indian government is not convinced about Pakistan's assurances. "We believe the number of militants in the valley has gone up, but they're quieter than usual," says a police official. And that is because their parent organisations wish to gauge Musharraf's stance during the forthcoming negotiations with India.

While the militants are busy figuring out what they need to do, life seems different for the local populace as well as the tourists. Places like Kokernag, Achabal and Gulmarg continue to witness heavy rush of tourists. Says Nazir Ahmad Siah, who runs hotel Kingsley in Gulmarg, "One day, I had to convert my dining hall into a dormitory to accommodate a group of stranded tourists. Last year, or even during the past 12 years, we used to sit idle waiting for customers."

In fact, there's so much euphoria about the boom in tourism that some experts suspect that a sense of complacency has seeped in. "Not too many people realise that it's become easier to create fresh trouble in the valley. It just needs one major incident (like Kaluchak, although a cantonment was the target there) to burst this economic balloon," says a member of the National Conference. An intelligence officer admits that the security forces are also being taken in by this lull, which could turn out to be the one before the storm.

Even the CM realises that the tourist inflows could be a short-lived phenomenon."A few weeks ago, I told the Mufti that we should publicise the facts about the ongoing boom. But he refused, saying there was no point attracting the attention of militants on this issue," says Sadiq Ali. Instead, the Mufti believes in the word-of-mouth campaign that will woo more tourists. And he can do it as long as there are people like this California-based Indian couple, who visited the Dal Lake and vowed that "we will visit each year to celebrate our marriage anniversary".

Alam Srinivas And Zafar Meraj In Srinagar And Pahalgam 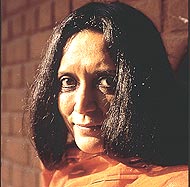