Gehlot is stunned by his defeat. But the victorious BJP is probably even more so Updates 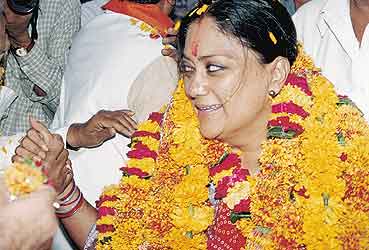 outlookindia.com
-0001-11-30T00:00:00+0553
In the end, it did not turn out to be the predicted battle royale between the BJP and the ruling Congress. In what turned out to be a rippling BJP campaign that tore the heart out of a disjointed Congress one, the Maharani of Dholpur and BJP chief minister-aspirant, Vasundhararaje, did what even the BJP strongman from Rajasthan, Bhairon Singh Shekhawat, failed to achieve—a clear majority in the state assembly. The BJP has proved all pollsters wrong.

The saffron blow has been all-encompassing. While Vasundhararaje herself rode triumphant, defeating the widow of Rajesh Pilot, Rama, from Jhalarpatan by a convincing 27,000-plus margin, nearly all prominent BJP nominees were elected by significant margins as results started pouring in from Sri Ganganagar, Jaisalmer, Suratgarh and other constituencies. The Congress' situation was in sharp contrast. The two deputy CMs, Kamla Beniwal and Banwari Lal Bairwa, were defeated—as was state home minister Gulab Singh Shaktavat. Besides, ministers like Taiyyab Hussain, Shanti Dharival, Rajendra Chowdhary, Khet Singh Rathore, Ramkishan Verma among others also bit the dust. Chief minister Ashok Gehlot, however, won with a huge margin of over 19,000 votes himself.

"I accept and respect the mandate," a shaken Gehlot told reporters. BJP leaders were equally surprised. The party's poll observer for Rajasthan, Pramod Mahajan, who's being credited with crafting the BJP campaign and its eventual win, admitted he was hopeful of only 100 seats. The final results topped his wildest calculations. "It's for the first time in Rajasthan's history the BJP has crossed over 100 seats," he said. The seeming absence of any tangible reason that could account for this—beyond the Jat and Adivasi factors—brings one squarely to the impression of solidarity generated in the last lap of the campaign.

It seems incredible that this ratcheting up of the pitch helped the BJP cover more than the 10 per cent deficit it needed to beat the Congress. According to party sources, an internal survey conducted days before the polls showed nearly 40 vulnerable constituencies where the margin of victory was likely to be thin. Sensing the mood, top BJP leaders like L.K. Advani, Arun Jaitley, Mahajan and Vasundhraraje herself launched into a vigorous campaign in these places. Not surprisingly, the last BJP election meeting in Rajasthan was addressed by the PM himself. This visibility and the sense of a phalanx on an unrelenting march actually took it to victory.

The Congress campaign was relatively low key. Sonia Gandhi was the star attraction with Gehlot in tow, apart from some other Congress CMs. Even though Sonia received crowds larger than what the BJP leaders were able to muster, the point that was driven home is that crowds don't always guarantee votes.

Out of the five states that went to polls, it was Rajasthan where caste remained a very important factor and it played havoc with the prospects of Gehlot and his party. While Gehlot himself had been propagating reservations in jobs for the economically backward among upper castes—he included Jains as a minority in Rajasthan—the BJP stole the thunder by successfully emphasising that a quota for the Jats was its doing.

Jats, who account for a total of 20 per cent of the state's voters, played a crucial role, though by no means the only one. Although the Jat Mahasabha had appealed for the BJP, Ganga Mal Meel, brother of Jat Mahasabha president Raja Ram Meel, lost from Pilibanga as a BJP candidate.However, in the critical Mewar and Shekhawati regions, Jats turned out in huge numbers for the BJP. Result: a number of Congress Jat leaders were routed.

Finally, of course, Gehlot found anti-incumbency tough to overcome. There were indications that in the southern and eastern parts of the state, where the drought had been handled well, the Congress would do well. With Gehlot tightening the administration, a large segment of the local bureaucracy worked against him. Undoubtedly, Gehlot did pursue a developmental agenda. But it was clearly a case of too little, too late. Besides, public memory, at such crucial electoral moments, is liable to tend to amnesia. Gehlot could have been its latest victim.