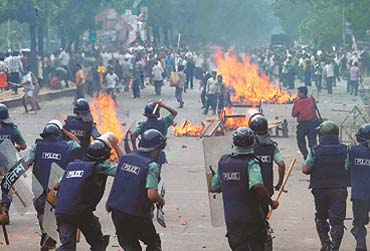 outlookindia.com
-0001-11-30T00:00:00+0553
'Iajuddin's Presidential Coup', screamed the Bengali language Bhorer Kagoj newspaper as Bangladesh began a journey into political uncertainty ahead of the next general elections scheduled for early 2007. Ominous signs of this came in the last week of October as street protests, bloody clashes and deaths in police firing rocked the country. The catalyst for the turmoil was the raging controversy over who should head a non-partisan caretaker government which, according to the Bangladesh constitution, must take over charge from the outgoing elected regime to hold free and fair elections within 90 days. 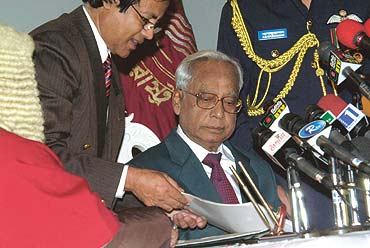 The Bhorer Kagoj headline was apt because of the seemingly hasty decision of President Iajuddin Ahmed, a former university teacher, to head the caretaker government (designated as chief advisor) without even probing the options the Bangladesh constitution explicitly spells out for the purpose. The first of these options requires the president to appoint as chief advisor the person who retired last as Bangladesh chief justice.

Days before the caretaker government was to be sworn in, tens of thousands of activists of the 14-party opposition alliance led by the Awami League (AL) had converged on Dhaka, promising not to retreat until the earlier caretaker chief designate, retired chief justice K.M. Hasan, opted out in favour of any other figure. For months, Awami leader Sheikh Hasina Wajed had kept pressure on prime minister Khaleda Zia over the issue of who should head the caretaker government, while also demanding that chief election commissioner M.A. Aziz and his deputies be fired to ensure a "level playing field" in the election. With six rounds of talks between Zia's Bangladesh Nationalist Party and the AL not yielding results, Dhaka was swamped by Opposition activists. 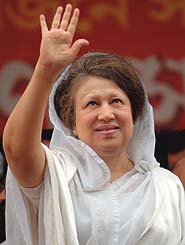 Mounting protests in the capital and elsewhere ultimately persuaded Justice Hasan to bow out. He said he was doing it for the "sake of the people and the country". But hardly had the Opposition begun savouring its victory, President Ahmed announced he would take charge of the caretaker government. In doing so, the president had glossed over other options the Constitution contemplates should the last retired chief justice not take the post of chief advisor. These options are: the person who retired second last in the line of ex-chief justices; the person among the appellate division's ex-judges who retired last, and if not him then the person who retired before him. Should none of these options be available, the president shall, after consultation with major political parties, appoint the chief advisor from among citizens of Bangladesh. Only in the absence of consensus at that stage is the president empowered to head the caretaker government.

Former chief justice Mahmudul Amin Chowdhury and retired appellate division judge Hamidul Huque—the next in line after Hasan—told Outlook that they were not invited to take charge of the caretaker government. Says Kamal Hossain, an internationally known lawyer and one of the architects of the Bangladesh constitution, "The president skipped several options...and took over charge, which is a violation of the constitution." The Daily Star newspaper was categorical, "Definitely, the fifth option of an eminent citizen acceptable to all was not even seriously tried."

'The President's coup' raised the spectre of bloody weeks ahead. (Ahmed had been elected as the country's president by lawmakers from the BNP and its allies after sweeping to power in 2001.) But suddenly things cooled down with Sheikh Hasina meeting the president and calling off the street protests. She, however, insisted that at this stage she was neither welcoming nor rejecting Ahmed, adding that a firmer decision would be taken after observing his first days in office. Her deputy, Abdul Jalil, added that the 10 members of the president's council of advisors would also be under watch for neutrality. 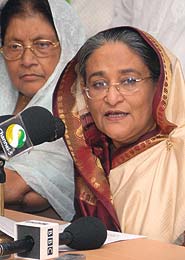 One reason, it seems, for Hasina's decision was the fear of army rule. Reliable sources told Outlook that President Ahmed had indeed considered calling in the troops to quell the violence and, if necessary, declare a state of emergency. She, obviously, calculated that an emergency would ruin her chances of returning to power and stall the political activities she had in motion. Analysts feel she perhaps wants to consolidate on the political momentum gained from Zia's failure to end her rule peacefully. These are still early days, but it could be said that Hasina, at the moment, enjoys an edge over her rival.

Yet the crisis is far from over: the Opposition could even now boycott the election. In a statement for diplomats, Hasina said her party was only giving time to Ahmed to show his neutrality. And he will be seen to be neutral only if the caretaker government meets the Opposition's 11-point charter of demands for reforms by November 3. Already, one of the newly appointed advisors, Justice Fazlul Haque, has come down heavily on the deadline, "I'll object to this. We don't have any link with politics. Why would we be under observation? What crime have we done by taking oath for conducting the election in a free and fair manner? What does this mean? These statements are inviting dangers for the country."

Former caretaker advisor and leading economist Wahiduddin Mahmud weighs in on the issue of neutrality, saying it is pertinent to this caretaker government as, unlike the four previous ones, it's headed by a president "who was elected partisanly and who has to perform the job of a neutral government chief". Other ex-caretaker advisors agree that both the election commission and the administration will have to be reshuffled. The Zia government has placed people sympathetic to it in most sensitive posts.

Indeed, there's been no denying the salience of the issue of neutrality. As the Daily Star stressed on its pages, "...the manner in which he (Ahmed) acquits himself in the next few days and weeks will show whether people will have any faith in his ability to deliver his main task, namely, a free and fair election. The nation and the world are looking and he will be only as good as his actions."