Shiela Dixit And Her Gaseous State

A page on the state(s) of the nation -- states covered: Delhi, Karnataka, WB, Orissa & Kerala 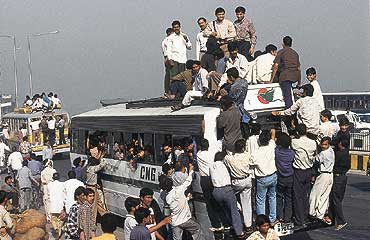 The pitfalls of having two sworn political adversaries wielding authority over one entity is something Delhi is familiar with. But this time—with 5,574 buses off its roads and private operators on an indefinite strike—it got as bad it could. The crisis over CNG—short for compressed natural gas—blew up in the Delhiite’s face last week. A Supreme Court bench headed by Justice B.N. Kirpal shot down the state government’s plea for another extension to the January 31 deadline for the conversion of all diesel buses to the ‘green fuel’. Saying that diesel fumes were inflicting the equivalent of "one Bhopal a day" on the city’s children, the court also ordered a hefty daily fine of Rs 500 for every errant bus.

This has resulted in a near collapse of Delhi’s transport system, leading to complete chaos, what with harried commuters crowding the bus stops and some even risking rides on bus roofs. Things reached such a pass that CM Shiela Dixit ordered schools closed for two days. And this time too, not unlike every time this issue has erupted in the past, the state Congress leadership held the Centre responsible for failing to provide enough gas. The court, though, would have none of it: it hauled up both the governments for inaction. Its message was clear: no delaying tactic would be tolerated since long-term health is at stake.

M.L. Khurana and Sahib Singh Verma, both ex-CMs of the BJP and identified with the diesel lobby, tried to take the issue out of the judicial ambit. What they wanted was an ordinance permitting polluting buses to ply. This ingenious ploy, however, could not come to pass because an ordinance can’t be passed while Parliament is in session (though it is in recess).

Dixit and her new transport minister Ajay Maken blame the lack of coordination between the Union petroleum ministry and the Indraprastha Gas Limited for the impasse. The noises are familiar: both the Centre and the state have been wasting their time in mutual recriminations since the court’s first order in July 1998 to convert Delhi’s fleet to CNG by September 30, 2001. This, apart from the age-old vice of apathy: it took 18 months for the city’s transport corporation to place its first order for CNG buses.

On April 10, both parties softened their stance. Dixit decided not to appeal against the fine on diesel buses, and the Centre (after a ministerial meeting where wiser counsel prevailed) stopped talking about an ordinance. But, till gas starts flowing and a CNG-compatible fleet is put in place, the commuter is still stranded at the bus stop.

Dial A For Action

Upset with the indifference of the private operators towards rural telephony, Union communications minister Pramod Mahajan has threatened stern action. "I hope that the operators won’t force the ministry to take unpleasant action for failing to meet their village public telephone (VPT) targets. We’ll review the progress made in the fourth week of June. If the progress is not satisfactory, the ministry will be compelled to initiate action for termination as per the provisions of the licence agreement," Mahajan told Outlook.

The minister says he knows the Tatas, Bharti and Reliance are involved but he’d spare no one.

Goodbye To All That?