She's In The Army Now

Does a lenient regimen pamper the ladies? And trigger rancour among male peers? 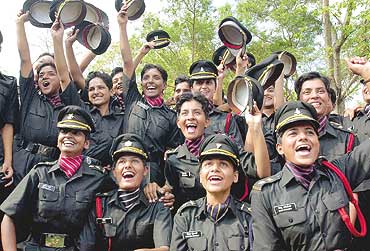 outlookindia.com
-0001-11-30T00:00:00+0553
While the remark by the vice-chief of the army, Lt Gen S. Pattabhiraman, that women were not suited for combat duty sparked off loud protests across the country about a "prejudiced mindset" in the forces, it evoked little consternation within the army. Many senior officers feel Pattabhiraman was merely articulating what is already a growing sentiment within the force. The vice chief has since apologised for his remarks, which he says were taken out of context. He had only said the feedback army headquarters was getting from units deployed in combat zones was that the commanders preferred men to women officers.

The entire controversy has made the issue of women officers in the army a talking point. Though women stand out for their sincerity and commitment, many senior commanders are clearly biased against them. Outlook spoke to a cross-section of senior serving army officers as well as women in the force to trace out the mood in the army.

According to senior officers, the root of the problem women face in active service lies in inadequate training. The 24 weeks that they undergo at the Officers Training Academy in Chennai is half of what their male colleagues are put through. Points out Captain Anubha Deshpande, a lady doctor with the Army Medical Corps: "This is why many women do not know how to conduct themselves properly while dealing with superiors, are often rude and guilty of insubordination. Most of them are not mentally prepared for the nature of work they have to do, and readily accept the pampering which senior officers often shower them with."

So far it has been seen that commanding officers who have a woman officer serving under them are extra-protective about her welfare and security. "This not only breeds resentment among male colleagues but makes her feel more privileged too. It can lead to indiscipline. A captain is a captain and has to be treated as such, irrespective of gender," says Lt Gen D.P. Singh (retd) who, till a few months ago, was the commandant of the Infantry School, Mhow.

But this is easier said than done. There are practical problems. An indignant infantry officer recalls an incident where men and resources had to be diverted to "accommodate" a woman ordnance officer who was posted to his battalion in the Rajouri area. "At a time when the battalion needed every man on the field, we had to detail three of them to guard the woman officer. Everyone heaved a sigh of relief when she left," he told Outlook.

At another time, a woman signals officer pulled up a jawan in her company deployed in J&K, using somewhat abusive language. The stung sepoy, unused to being rebuked by a woman, avenged his 'humiliation' by setting fire to her living quarters. Such incidents are seen by senior officers as an unnecessary complication which is best avoided. Points out Maj Gen Pushpendra Singh (retd): "At least 99 per cent of the troops in the army come from a social milieu where women are seen as inferior and meant to be subjugated." That mindset has to certainly change.

The 'kidglove' treatment meted out to women officers by not giving them too many night duties, tough assignments and more of static jobs is also resented by male officers. "Though they may be very good at administrative work, they have to do the unpleasant stuff too," says a serving colonel. More women are posted in peace locations and male officers see this as fewer appointments for them in peace stations after a field tenure.

For the first time a woman doctor was posted at the Siachen Base Camp this year to attend to the battalions deployed on the glacier. It was projected as a major achievement, but the army has decided not to post any more lady doctors there because it was found that the woman officer was unable to attend to casualties occurring in the upper reaches. The brigade commander was on tenterhooks as she was the only woman among 1,400-odd men for the two months that she spent there.

It's been more than a decade since women have been drafted into the army. Over 2,000 women have served in the force since 1992-93. But perceptions have changed little. As Lt Gen D.P. Singh points out, "It's not only the women officers who need to orient themselves for a service life and pick up the service ethos, but our senior officers, who have women under their command, too need some orientation on how to handle a woman officer. For instance, though we are trained to stand up when a woman enters a room, this should not be done with junior lady officers." Very clearly, gender biases are proving much harder to overcome in the army than in any other profession.