She's Got Other Ideas

It's not their spunk or success, but the range of their offbeat choices that will surprise you 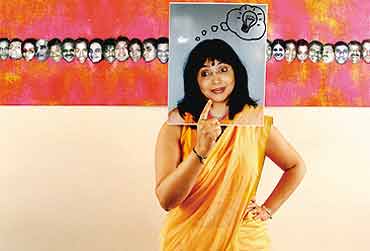 outlookindia.com
-0001-11-30T00:00:00+0553
It was 20 years ago that Lakhwinder Kaur Garcha from Sangrur, Punjab, found herself in the unfamiliar terrain of Durgapur in West Bengal alongside her husband who had been posted there. Bored, stifled, restless and raring to do "something" more than look after her two children, she looked around for opportunities. A stint in insurance didn't prove challenging enough. What did catch her fancy was the business of providing security guards to commercial establishments. She jumped into it on a whim. She didn't have any guards on her rolls, no office, not even a letter pad to call her own. All she had was self-confidence, persuasiveness and a garage to begin work from. "The first contract I bagged was to supply eight guards for a factory in Durgapur run by Swraj Paul's younger brother," she remembers. Today Garcha, who is in her 50s, runs Victor Industrial Security in Chandigarh and employs over 700 guards. 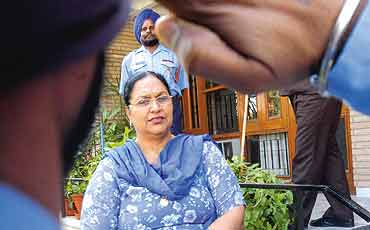 Like Garcha, 35-year-old Captain Mamatha in Hyderabad also found her true calling on sheer whimsy. She wanted to become a doctor but idly applied to the AP Flying Club (now AP Aviation Academy). It normally takes a student about one year to get a pilot's licence but it took her five because there were few training aircraft. "A flying school with good infrastructure was the need of the day," she remembers. So she applied and got permission from the Director-General of Civil Aviation in '95 after two years of sustained negotiations. Today, her Flytech Aviation Academy is spread over 275 acres at Vanasthalipuram and shows an annual turnover of Rs 2 crore. It has 300 students and 60 staffers and boasts of 10 Cessna and Beach Barron aircraft for training.

It's every woman's dream: to earn her own money and then save, invest and spend it the way she would want to. But some, like Garcha and Mamatha, dream bigger. It's not just about being financially independent but creating wealth for others. It's not about being gainfully occupied but providing employment to others as well. Big or small, famous or unsung, there are several such women entrepreneurs spread across India who are contributing significantly to the country's economy. The most remarkable aspect, however, is the range of areas where they have seen opportunity and money. From bartending to fuel production, from conservation to wedding management, they have rushed into uncharted areas with spunk and aplomb.

From a garage, she has moved to a 4,000-square foot office. From 12-13 weddings a year, it has grown to managing 74 weddings a year. She has even done the arrangements for fancy events like the wedding of the Princess of Kuwait and another for a family of diamond merchants in Belgium.


At first glance what these women seem to share is their proclivity to take risks. But look closely and you'll find that their sense of adventure is actually backed by foresight and a sound business sense. After getting her licence, Mamatha could have chosen the obvious safe option, joining an airline. "I would have been drawing Rs 3 lakh a month," she says. But she saw potential in a flying school. "In the early '90s, at least a hundred people from Hyderabad were going to the flying schools in the US. I knew that if I could tap at least 25 per cent of them, I would have a good business in hand," she says. 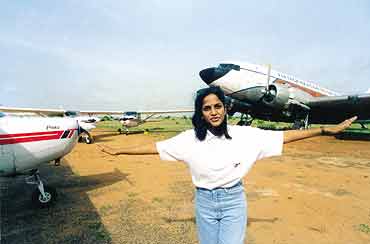 Similarly, with a degree from IIM Calcutta and experience in the garment trade behind her, Latika Khaneja took a plunge into the fairly new discipline of celebrity management. She just had a few potential cricket stars in hand, like Virender Sehwag, Ashish Nehra, Dinesh Mongia, Amit Bhandari and Gautam Gambhir. She remembers how Sehwag was offered a Rs 12 lakh contract by a website. "He was quite kicked about the offer. 'Meri Maruti aa jaayegi', he used to say. But we asked him to wait, made an attractive brochure for him. In November 2001, he got a century in South Africa. A month later, we signed up Coke," she recollects. Four years later, despite the country's cricket obsession, she took on the job of marketing Olympic silver medalist shooter Rajyavardhan Rathore, getting him contracts with Hero Honda, Sahara and Coke.

Shikha Sharma took the risk of giving up a secure career in medicine to become a nutritional expert. She was a junior resident in the cardiology department when she found a patient returning to the ICU with heart trouble, all because his diet wasn't kosher. She got intrigued by the science of weight and health management and eventually started her own nutritional advisory clinics. "I wanted to treat health as a serious business, hiring dieticians, creating recipes and databases and prescribing diets systematically," she says. She now gets 800-1,000 people a month for consultation at her five centres in Delhi. 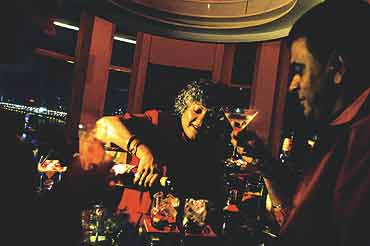 Similarly, for Preeti Vyas Giannetti, who pioneered publication design, did graphics for films, directed music videos and designed CD-ROMs, it was almost a professional peril to launch Vyas Giannetti Creative. "I became an entrepreneur, a woman entrepreneur from a creative background (no degree in business management) at a time when the advertising industry was having its most difficult moments," she says. She launched VGC in 1997 with one computer and one employee in a Versova loft in Mumbai. Now she has over 60 people between Delhi and Mumbai offices. VGC is a brand communications agency with a capitalised billing of around $12 million (Rs 50 crore-plus) and is amongst the top 25 advertising agencies in the Economic Times ratings 2005. 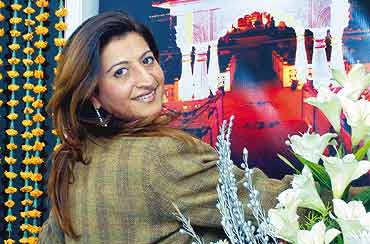 Right from a high-flying CEO of a company to friendly neighbourhood beauty parlour or boutique owners, the business women have something else in common—resourcefulness and an ability to spot opportunities where none seem to exist. Sushma Puri returned home from London after 17 years to find that models were being represented by small, unstructured, fly-by-night operators. She took up the India franchise of Elite Model Management. Today, she has 1,500 clients and 150 models on board and has introduced popular faces like Sonalika Oberoi and Neha Kapur. "What excited me most is how I could change the entire way in which the fashion industry was functioning. I brought the element of focus and seriousness into the modelling business," she says. 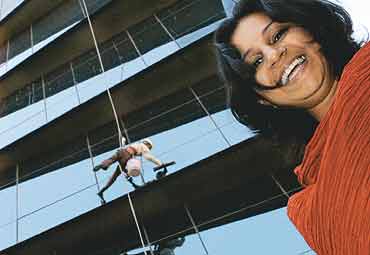 Even women who have inherited their parents' businesses have shown immense initiative and drive to expand on it and give it their personal signature. Take hotelier Priya Paul, who took over the Park Group from her father and successfully repositioned it as a boutique hotel chain. "From three properties, we have grown to five with the sixth coming up in Hyderabad," she says. The group's turnover now stands at Rs 150 crore per year. Similarly, Suhag Khemlani, director at her father's Technoclean, a window cleaning company, professionalised the processes by introducing rope access equipment and training for the employees. Under her guidance, the company has grown to about 700 cleaners spread across 17 cities with a turnover of Rs 6 crore a year.

Ask these ladies about possible gender bias they may have faced on the road to success and most don't make an issue of it. Prejudices were taken in their stride, negotiated smoothly and sternly. Garcha remembers that when she was filling the tender for security guards at Indian Oil Corporation's Durgapur plant, an official told her: "A woman herself needs security, what security will she provide us?" Says she: "I really lost it and gave him a piece of my mind. But I managed to get the contract." Till today, this officer sends her a Diwali card every year. 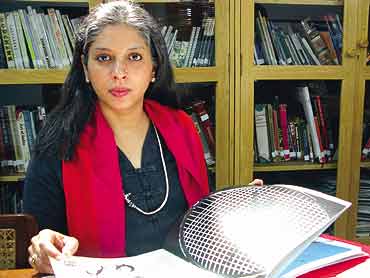 There can be challenges of other kinds too. Take Sujata Kesavan from Bangalore, arguably the topmost graphic designer in the country. As a student, she was deeply interested in science as well as the arts and chose to specialise in design because it combined both fields. But when she came back to India after doing her Masters from Yale there were no design firms around. So she had no choice but to set up her own, Ray+Kesavan. However, despite being on the top of the heap, the lack of understanding about design in India continues to be a problem area for her. "One spends an excessive amount of time convincing clients. There is a mistaken notion that design is expensive, elitist. Indian industry needs to be educated as to how design can be leveraged to offer better products and services to improve the quality of life for all sections of society," she says.

For women. managing the business is all about learning on the job, dealing with failures and frustrations to emerge on top. Just as it is for men. For Ritu Dalmia, whose family runs a marble and granite business, setting up a restaurant, Mezza Luna, in 1993 meant facing "super failure". The expensive, fine-dining restaurant was way too ahead of its times. "It taught me that in business you need to be an inventor rather than an innovator," she says. She then moved to London, started the successful Vama and later came back to start the popular Diva in Delhi which now has a turnover of Rs 4 crore a year. "I didn't go to Harvard or Wharton. My business school was Mezza Luna. The failures taught me how to be focused and capitalise on my strengths," she says. 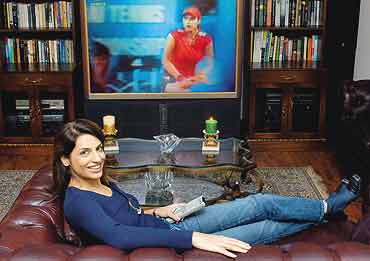 The game's all about your mindset. It's not so much about being a woman in a man's world but about the love of work itself, about deriving a sense of identity from it. "My work is what I am. I don't see myself separate from my work," says Somaya. What gives Khaneja a high is to see cheques and endorsements flow in for her celebrity clients. "Your end goal is always self-evolution," says Giannetti. And Mamatha loves the fact that she bumps into her own students whichever airport she goes to. "I help build futures, which is very satisfying," she says.

It may mean compromising on that typical happy family situation. Garcha had to stay on in Durgapur for five years, even after her husband got posted out because she didn't want to give up what she was doing. She shuttled every month between Durgapur and Chandigarh when she was shifting her business to Punjab. Zadgaonkar's seven years of continuous research happened mostly after dinner and between family chores. She would teach at the college in the mornings, do R&D work, attend to her share of housework in the joint family, help her son study and then get back to her R&D again. "I managed with two-three hours of sleep," she says. Somaya says she never felt embarrassed about juggling the many roles. "If I had an issue, I would tell my client. I'd say that 'my child is unwell'. Transparency in how you work is very important," she says. 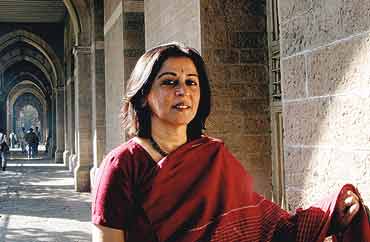 Like all good entrepreneurs, none of these ladies are willing to rest on their laurels. Mamatha plans to start a chartered airline service in Andhra Pradesh. Zadgaonkar wants to make high-end refined fuel. VGC's next office is going to be overseas. Sharma intends to start a nutrition training school. Simultaneously, they are also keeping their philanthropic spirit alive. Ray+Kesavan works pro bono for non-profit organisations. Mamatha sponsors the education of the children of her Class IV employees. Somaya has been rehabilitating earthquake-hit villages, has worked in slums and orphanages. The women from the village she rebuilt in Kutch embroidered the sari she wore on her daughter's engagement. "What we get back is much more than what we give," she says. For them, that's when the business truly becomes a profit venture.