The national wildlife board has little focus 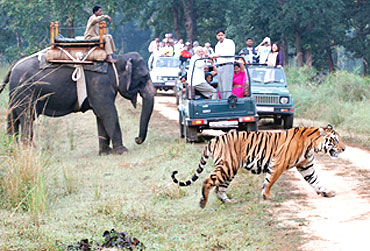 outlookindia.com
-0001-11-30T00:00:00+0553
The country may be facing dire wildlife conservation crises on several fronts, but it turns out that its apex conservation board, chaired by no less than the prime minister, has little time to even meet. Few of its decisions are implemented on the ground anyway. This has prompted many of its members to call for a complete overhaul of its functioning. Right now, it is for all practical purposes non-functional.

The National Board for Wildlife (NBWL) was constituted in 2003 to promote conservation and development of wildlife and forests. The last full board meeting was held in November 2007. At least one such meeting has to be convened by the PM each year but 2008 went by and it is still to meet this year. The standing committee—a smaller working group of the board—has been meeting regularly, but critics say the committee has done little, if anything at all, on wildlife protection. Nearly all of its decisions have had to do with diverting forest land and allowing surveys to be conducted for commercial purposes.

This attitude has divided the board into two camps, pitting non-official members and official ones against each other. The former group (10 individuals and five NGOs) even wrote to the PM asking for his immediate intervention. "The secretary took a meeting with all of us in December but no follow-up resulted," says Valmik Thapar, a board member. "The standing committee has become a clearing house (for projects) and needs to be scrapped. A new standing committee with a mission to resolve wildlife issues needs to be constituted."

Moreover, whatever few decisions to protect wildlife were taken at the full board meeting in 2007 have not been implemented, prompting some members to question the raison d'etre of the board. "For instance, we had asked for the Wildlife Crime Control Bureau to be revamped and strengthened. That has not happened fully and, meanwhile, wildlife crime continues unchecked," says Biswajit Mohanty, another member.

Some argue that since the last meeting in 2007, the PM has been too busy focusing on the nuclear deal and the politically charged run-up to the Lok Sabha elections. But Mohanty rubbishes claims of the PM having little time to convene a board meeting. "He finds the time to attend CII and other industry meets. Then why not wildlife," he asks. "It's a question of priorities. With the disappearing species and dwindling habitat, wildlife also deserves attention just like the economy."

The numerous tiger deaths call for the most urgent attention. In fact, it prompted members of the board to dash off another letter to the PM in February last year. They had complained that decisions taken by the NBWL to protect the big cat—including the creation of a dedicated subcommittee for tigers—was not adhered to. Beyond the tiger, there are numerous other problems. Whether it's the dying gharials in the Chambal river or the dwindling Olive Ridley turtle population, the board need not look too far for issues where it can intervene. NBWL member-secretary M.B. Lal was unavailable for comment.

"In many ways, the dmk had made the ministry a clearing house in the last 10 years, forgetting its primary role of safeguarding the environment. That's probably why it has come back to the Congress," says Thapar. "Hopefully, it will also mean a change in its functioning and policy," adds Mohanty. Actually, the new minister, Jairam Ramesh, took special care to make industry-friendly noises in his first comments after taking over—and said he was mandated by the PM to do so. This wouldn't prove to be cause for pessimism if the new regime is equally eco-friendly too.