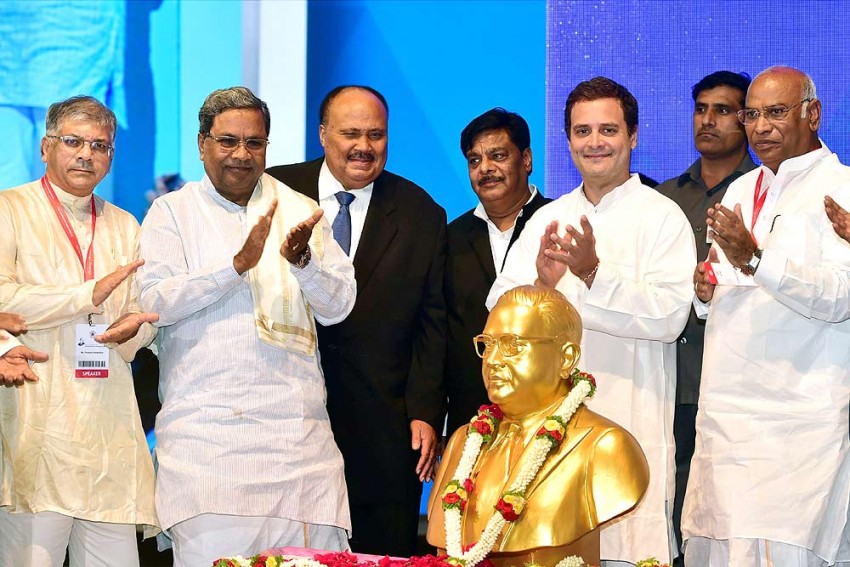 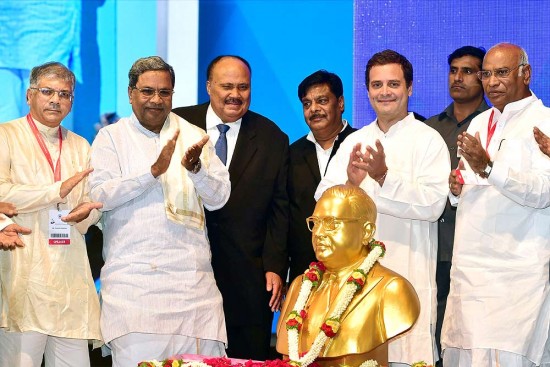 Just over three months ago, Karnataka’s ruling Congress won two byelections in the state when its chips were down elsewhere in the country. The results invited the characteristic drawl from chief minister Siddaramaiah. “Karnataka is not UP,” he said, the victory seemingly shoring up his confidence. Then, on July 21, as he took the centrestage at a conference in Bangalore on social justice, Siddaramaiah, had a word for critics who often labelled the four state budgets he presented so far as ‘Ahinda’. “I take it as a compliment,” the 68-year-old leader said about the Kannada acronym for minorities, backward classes and Dalits—the pol­itical plank he has claimed for himself for over a decade now.

Plenty has happened in between, especially that a beleaguered Congress appe­ars to rouse itself, unlike in many other states, for a stiff fight in Karnataka, where assembly elections are due in less than a year. Siddaramaiah, as some put it, is calling the tune at the moment. And, rattling the BJP while he is at it. Over the past fortnight, he has touched off the Kannada pride debate over a state flag. Then, he has hosted a large gathering of scholars and activists to commemorate Dr B.R. Ambedkar—the largest such assembly veteran social theorist Ashis Nandy says he’s seen in his lifetime—that appeared to be consolidating the two prominent Dalit secti­ons. Equally significantly, he has opened up the old faultline of Linga­yats—followers of a distinct Shaivite tradition—vis-a-vis their fitting into the Hindu fold.

To some, Siddaramaiah has taken a leaf out of the BJP’s book. Others say he has borrowed from his role model, late politician and two-time CM Devaraj Urs, but tweaked things a bit. “These are all very calculated moves...a kind of eyeball-to-eyeball confrontation with the BJP,” says Harish Ramaswamy, who teaches political science at the Karnatak University in Dharwad. The Linga­yat religion issue, for that matter, isn’t new at all, even though the terms Lingayat and Veerashaiva are used almost as synonyms. But on July 18, a fairly large gathering in Bidar at the state’s northeastern tip supported the demand to catergorise Lingayat as a separate religion. Siddaramaiah said he was ready to recommend the demand to the Centre if the whole community supported it. Five Lingayat ministers in the Congress government then took it upon themselves to reach out to the larger community to gauge their opinion. As political observers read the move, this can potentially bring the Lingayats into the minority fold and, hence, stake claim for reservations.

The Lingayats are a large, landed and politically powerful community, whose support to the Congress started waning during Urs’ chief ministerial years in the 1970s and then plummeted in 1990 when party national president Rajiv Gandhi unceremoniously sacked Veerendra Patil as the CM. That support gradually went to the BJP, whose chief ministerial candidate B.S. Yeddyurappa is the tallest political leader from Lingayats. He rules out wanting a sep-arate religion, because the community is “united” and “no difference” exists bet­-ween Linga­yats and Veerashaivas.

Siddaramaiah is with Lingayats on their demand for a religion. The move can bring the community into the minority fold, thus help them seek reservation.

Ramaswamy recalls that Urs tried it with land reforms, while Siddaramaiah was now up to taking religion, which is “an equally sensitive issue”. With Dalits, on the contrary, he spoke about the land issue. “I don’t know if this will sustain enough to convert into votes,” Rama­swamy says. “But it’s most likely to put the BJP in a spot.”

The reaction from Janata Dal (Secular) leader H.D. Kumaraswamy was a bit acerbic. “If the CM thinks that people of different communities are going to follow him the moment he announces some programmes, there’s no doubt that he’s delusional,” he told reporters. Of course, there is also that other Kannada acronym that is been in vogue, as an accusation by opposition parties, that Siddaramaiah’s government is anti-Jilebi—not against the deep-fried sweet, instead referring to Karnataka’s two large communities, Gowdas and Lingayats along with Brahmins. It’s a charge Siddaramaiah often likes to bring up himself in public gatherings—so as to deny it aloud.

The BJP too has been actively reaching out to backward sections with its vistaraks, and equally visibly, through Yeddyurappa’s visits, to Dalit homes. This has drawn sharp reactions from Siddaramaiah. In Karnataka, a large section of backward castes is divided across different communities unlike in some states where they are a consolidated formation sociologically, says political scientist Valerian Rodrigues. The RSS too, in Karnataka, connects to a section of this population.

Karnataka has backward castes divided across its society. They are waiting for some kind of a united political action. The chief minister is trying to tap into this constituency.

“That constituency is waiting for some kind of united political action. Siddaramaiah is trying to tap it,” notes Rodrigues. It might be an amorphous, heterogeneous group, but in terms of political aspirations, they all want to make their presence felt, he says. “So, Siddaramaiah connects to something like 12-15 per cent of the backward castes, which is not insignificant, but there is still about 17 per cent left who could go anywhere. That is crucial.” Siddaramaiah, a native of Mysore district, hails from the backward Kuruba community of shepherds, which is numerically large. Of course, as many commentators also note, he has also been able to use an earthy, rustic Kannada to reach out.

The recent Bangalore conference on social justice counts as Ahinda 2.0, as the Congress puts it, and sets the party’s election manifesto for Karnataka in a way. There were campaigns in the districts in the build-up to it over the past four months. “It has given, in my opinion, a swing in many constituencies which will help our party consolidate position in the coming election,” says K. Raju, chairman of the AICC’s Scheduled Castes department. The CM’s pro-poor initiatives have won him goodwill, he claims. “He has been very systematic in his approach to SC/ST development and devoted significant fund support to these programmes and brought in new schemes,” says Raju.

The party, he says, is adopting a strategy it employed successfully upcountry in Punjab, where it was able to increase its number of legislators from the SCs to 24 from 10 in the assembly elections in March. Raju says there is a leadership development initiative in reserved constituencies to promote leaders from all sections and develop booth-level structures.

“The impression one gets is the Congress has begun to move towards what it used to be in the 1960s, which is essentially a conglomeration of regional for­ces,” says Narendar Pani of the National Institute for Advanced Studies. “I think that is the broad strategy now. They used it in Punjab successfully and they are trying to do it in Karnataka now.” However, when he had started out in 2013 as the CM, Siddaramaiah was still much an ‘outsider’ to the party, about whose style of working loyalists often grumbled. “Siddaramaiah, I think, has proved his ability to build coalitions and the party is also backing that. There is no competing leader who can build as effective coalitions,” says Pani.

But there are eight months to polls. “The key challenge for Siddaramaiah and the Congress is to retain power, which is always a tough job,” says Rama­swamy. “That part of electoral politics has not come to the fore yet.”