Rajasthan CM Ashok Gehlot on his predecessor and Lalit Modi: 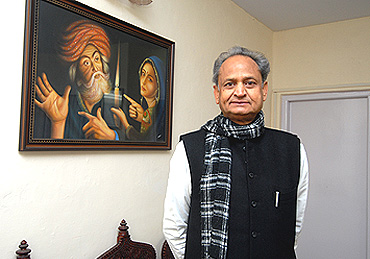 On corruption: My government will investigate the corruption charges against the previous BJP government, most of which, incidentally, were levelled by their own senior leaders then (they had even sought an inquiry). This government will investigate the misuse of Section 90 B (of the Land Acquisition Act) in land deals, in not seeking tenders in irrigation, electricity and water projects, the tapping of phones of its own ministers and officials, and fake encounters. A high-level committee will look into the charges of corruption in land deals. But this is not being done in a spirit of revenge; we only want the truth to come out.

On why the committee will look only at the land deals: The committee will examine all land deals; in the other cases, there are PILs in court. (Former vice-president) Bhairon Singh Shekhawatji asked me to send Vasundhararaje to jail...I told him that’s the judiciary’s job, not mine. I don’t want to repeat what happened in Punjab or Tamil Nadu (where the government of the day has routinely conducted a witchhunt against its predecessor).

On pressure to go slow on corruption charges involving Modi: There’s no pressure at all.

On the liquor policy: The BJP government, in its greed to increase revenues, adopted a liquor policy which saw liquor shops proliferate...it almost destroyed Rajasthan. We have closed down 800 shops in the towns. The people have welcomed these measures.

"There Will Always Be Detractors If You Create Something"