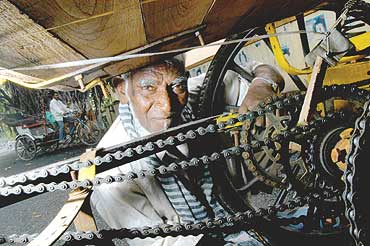 outlookindia.com
-0001-11-30T00:00:00+0553
He studied only till class four and has been a cycle-rickshaw plier since his teens. It was his failing health that inspired him to create a gear system to power his rickshaw. When Jabbar pulls the worn strings attached to the handle, he presses one of his four gears into service. So, while other rickshaw pliers get off and drag their vehicles up an incline, Jabbar just drops the gear to allow his rickshaw to glide up.

For 15 years, he saved money and built up courage to create the gears. Then over 10 years, took his rickshaw apart and rebuilt it with discarded parts, first with two and then four gears."People used to think I was mad when I told them what I was doing." Now, Jabbar has used a motley set of discarded parts to build a rickshaw where both wheels move and has four gears.

Jabbar has driven his rickshaw to Delhi and Wardha and has won an award from the National Innovation Foundation. There are a couple of rickshaws running in Nagpur and Jaipur to check if his model can be scaled for wider use. He estimates that his simple innovations would add just Rs 2,000 to the cost but would drastically reduce physical stress for millions of rickshaw drivers around the country.Meanwhile, he is ready with a new idea. He has fitted a rickshaw with a small engine to power it up inclines. To test this, he wants to drive it to Ahmedabad.

Today, his vehicle is recognised on the streets and feted. Many times he has to assure his woman passengers that it’s not her but his rickshaw that is inviting the stares.