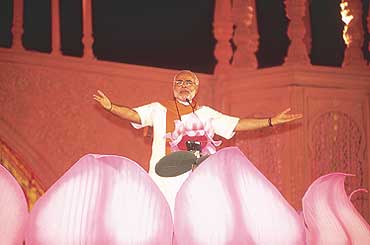 outlookindia.com
-0001-11-30T00:00:00+0553
When Narendra Modi emerged from a giant lotus to a rousing reception at Mumbai's Shivaji Park last week, he rattled not just the Congress but also the BJP's own ally in the state, the Shiv Sena. The Tiger stood challenged on his own turf by the new icon of Hindutva. But after a few swipes, Bal Thackeray uncharacteristically backed off.

The turnout at the rally was so massive it silenced the Sena. The realisation came home that Thackeray would have to accept Modi and perhaps cash in on his crowd-pulling skill. The Sena chief was quick to issue a statement that the BJP was free to hold its own rallies. The BJP too denied a rift. There is, however, no doubt that the BJP used the Modi felicitation ceremony in the city as a show of strength—an event from which the Sena was deliberately excluded. The choice of venue was also no accident. Shivaji Park is located a short distance from the Sena headquarters and chief Thackeray prides himself on his ability to draw huge crowds there. When BJP leader Gopinath Munde told the audience that he had not seen such a large turnout since JP's historic rally in the '70s, the slight hit home. Ironically, just a year ago, Modi had been a minor figure at a Sena-BJP rally on the same grounds.

During his visit, Modi also did not bother to call on Thackeray, one of his most vocal admirers during the Gujarat riots. It had Thackeray fuming but he did nothing. He had let his annoyance show a week earlier when he told party mouthpiece Saamna, "What is this Modi formula? Doesn't it really mean militant Hindutva which the Sena has been espousing for years? The BJP has often hemmed and hawed but for the Sena, Hindutva has been a firm commitment." A day before the rally, the paper even ran an item saying that the BJP had put up banners in the city without official permission. But all's well that ends well. The Modi visit has ironically brought the two parties together.