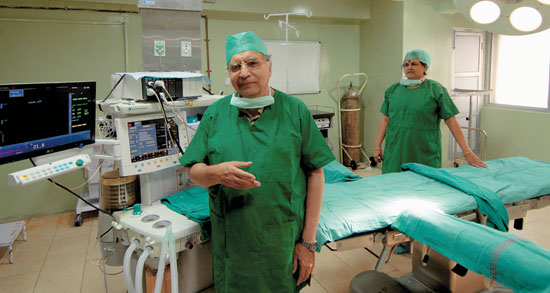 In October 1984, Dr T.D. Dogra, an assistant professor at the department of forensic medicine and toxicology at Delhi’s All India Institute of Medical Sciences (AIIMS), was asked to head a team of three doctors to conduct the post-mortem examination of the then prime minister Indira Gandhi. He didn’t know he would be asked to repeat the procedure on her assassin Beant Singh and many other victims of the anti-Sikh riots that shook Delhi in the aftermath of Indira’s assassination. Dogra recalls the nightmarish three days he spent in the mortuary and casualty. Currently head of the department of medicine and toxicology at AIIMS, he spoke to Anuradha Raman. Excerpts:

Where were you when you heard the news that Mrs Gandhi had been shot at?

In the lecture theatre room. I heard a constable shout “Indira Gandhi ko kuchch ho gaya” and rushed to the emergency room. I saw her being wheeled in at 9.30 am, and put on intubation—manual pumping of respiration when someone is seriously injured. She was taken to the operation theatre immediately.

Was she alive when she was brought in?

She was clinically alive. We use the word clinically alive when respiration, lungs and brain are functioning. It’s only when they cease to perform permanently and irreversibly that we call the patient clinically dead. So clinically Mrs Gandhi was very much alive when she was being wheeled in to the OT. I recall Sonia Gandhi and R.K. Dhawan being present there.

When were you summoned?

At around 2.10 pm, I was called and told that she had expired. By then, Rajiv Gandhi had come. I think health minister B. Shankaranand was also there. A decision was taken to conduct the postmortem. But by then...