When will the average Indian fan get it right? International ties are for the rich and famous, even cops, and he just doesn't figure in the scheme of things. 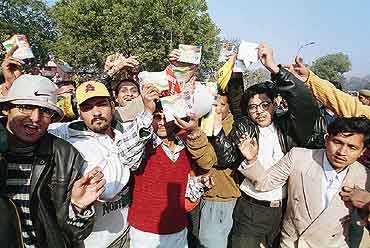 These people now stood outside the grounds once more in the great Indian queue, faces painted, carrying food in "transparent packages", waiting to get in and find their lawful 14-inch haunch-space, (16 inches if they had paid a few hundred rupees more). The cops abused and shooed many of them away because the East stand was mysteriously full before all ticket holders could get in. Outside the Vinoo Mankad Gate, they beat up some people. These were irresponsible fans who didn't reach the ground four hours before the start of the match, as requested by the Mumbai Cricket Association. Outside the Polly Umrigar entrance, the cops asked an elderly man with a special pass to go back home, till someone yelled out that the man's name, strangely, was Polly Umrigar.

Behind him was a sea of humanity knocking on hell's door not knowing what was in store. Those who got in by falling on strangers in front as a method of movement, suddenly wanted to go back home, find a way out from the heat and dust and chaos. In the East stand, many thousands held their bladders for eight hours. A very long time, it's said, for men. But they sat through. And analysts still say Indians crumble under pressure. The hordes in the East stand went without water or food and sometimes, air. Truly R.K. Laxman's common men. The Rs 200-per-ticket beings, hopelessly in love with a game that, like a bad marriage, gave them nothing but sorrow. Some of them had brought apples (sliced, for a whole apple is also called a missile in the new world order). They were not allowed to bring water bottles in, because one mad fling at an English long leg would end everything. So they searched for the Rs 3 water pouches in the stadium, which never came. In Chennai, during the third India-England one-dayer, the cops stopped people at the gates and tasted every soft drink bottle to check for alcohol. Using this excuse, they sometimes swigged most of the drinks, making one annoyed Guru Ramesh leave the whole drink with the cops.